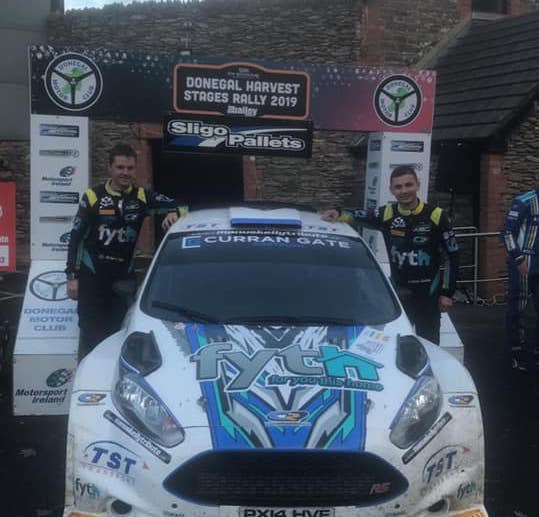 CALLUM DEVINE ended a fine year with victory in Saturday’s Donegal Harvest Stages Rally and there was optimism for the future of two Donegal drivers who finished in the top three.

County Derry man Devine, with Brian Hoy on the notes, won the event, held in Inishowen, in their Ford Fiesta.

Devine and Hoy had 25.6 seconds to spare on Donagh Kelly. The Frosses native was out for the first time in the new Volkswagen Polo R5.

Kelly was pleased with his run.

“I feel comfortable. I have more adjustments to do. I’m very encouraged and can’t wait for the next event. We had a couple of moments pushing for times. There is so much more in the car that we need to learn but so far I’m impressed.”

Devine, though, was the top performer on the day as he took the spoils over the nine stages.

Devine said: “We’re delighted. It’s our first year in an R5 and it’s been a great year. To end the year with a win is great.

“We didn’t make it easy for ourselves. We had a spin on a couple of stages. The guys were all driving hard and it was a big fight there.”

Muff’s Joe McGonigle was on home territory and finished third. There was just 0.5 seconds between Kelly and McGonigle, who could be pleased with his day.

He said: “Callum is the best driver in Ireland at the moment. We’re happy enough. The mad thing is that the stage I know best was my worst stage, but overall we had a good day.”

Josh Moffett was fourth in another R5 Polo, while Donegal’s Kevin Gallagher was fifth in the Darrian, taking the honours in class 14.

Mayo teenager Sara McFadden, who has hit headlines as Ireland’s first visually impaired competitor, was calling the notes for her father, Keith, in a Civic. A third-placed finish in class 3, saw them pipped to Border Championship class honours by Roger Kennedy and Wrendy Blackledge.