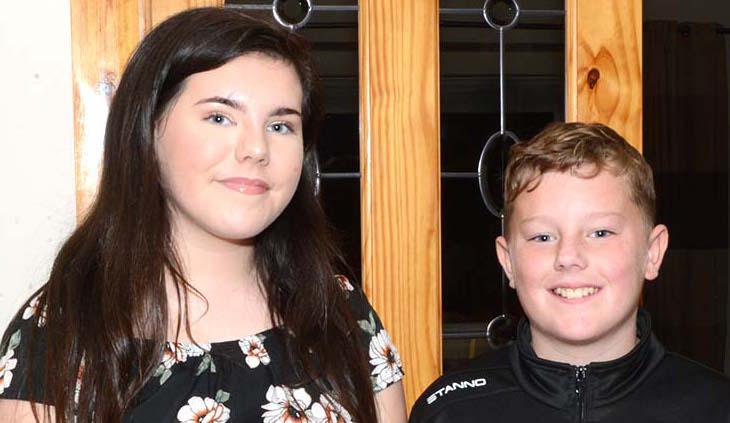 Kerrykeel girl Niamh Toland is happy to be home with her family for the holidays five weeks after her bone marrow and stem cell surgery.

The Tirconaill Tribune reports that Niamh, aged 14, was discharged on Friday and is said to be making good progress after receiving a life-saving transplant from her younger brother.

Niamh, a third year student at Loreto Community School first became ill in early January but the bone marrow deficiency was not diagnosed until May.

Her 12 year old brother, Niall became the donor when it was discovered he was a perfect match.

Niamh and Niall Toland pictured at their home in Kerrykeel.

After the successful surgery at the start of October, Niamh’s mum Brigid said they will now have to revisit Crumlin on a twice-weekly basis for the forseeable future.

The hospital will continue to monitor her progress for a year and initially, that requires a twice-weekly trip to Dublin from Gortcally.

Brigid told the Tribune: “The first 100 days are crucial and we are all keeping our fingers crossed that her recovery will continue. Niamh enjoyed a great weekend at home in Gortcally for Halloween but obviously, her activities are restricted over the coming months.

“We are all looking forward with much excitement and anticipation and we are forever thankful to the medical teams, the many great people who have supported the fundraising campaigns and we will take time in the coming months to thank people more personally,” said Brigid.

Meanwhile the gofundme page remains open at : https://www.gofundme.com/f/niamhtoland14 and an account is open at the Swilly Mulroy Credit Union at the Bridge in Kerrykeel. All contributions are most welcome.