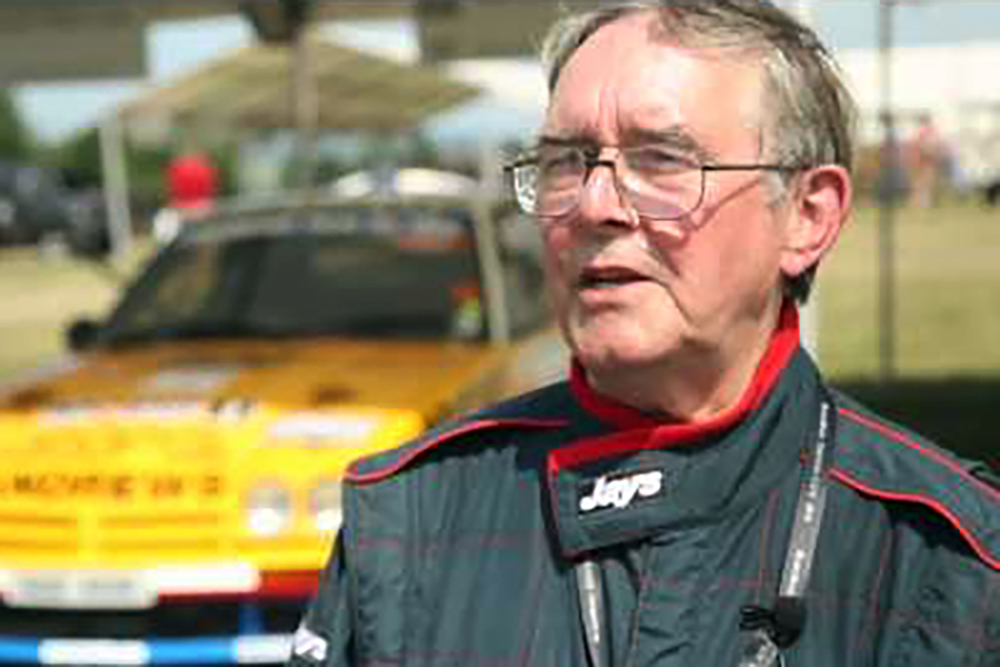 Last week rallying ace Russell Brookes passed away after a long illness, he was just 74.

In the year 1974, he made one of his very few trips to the Donegal International Rally. He was seeded on the entry list that year at No 36 in his Ford Escort Mk1 RS 2000.

Just one place ahead of a curly-headed Fermanagh man, Bertie Fisher also in an Mk1 RS 2000.

The story of Russell Brookes and his Donegal connection has more to do with his cars and how the ended up in Donegal than the great rally driver himself.

Right through from before he was famous looking for that first works drive with Ford.

The first of these cars was a Ford Escort MK1 Mexico which the late John Boyle paid £1150 for and competed in the 1973 Donegal in along with Johnny Mc Cafferty from Termon on the notes and sponsored by local Ford Dealership Mc Clean and McLaughlin. 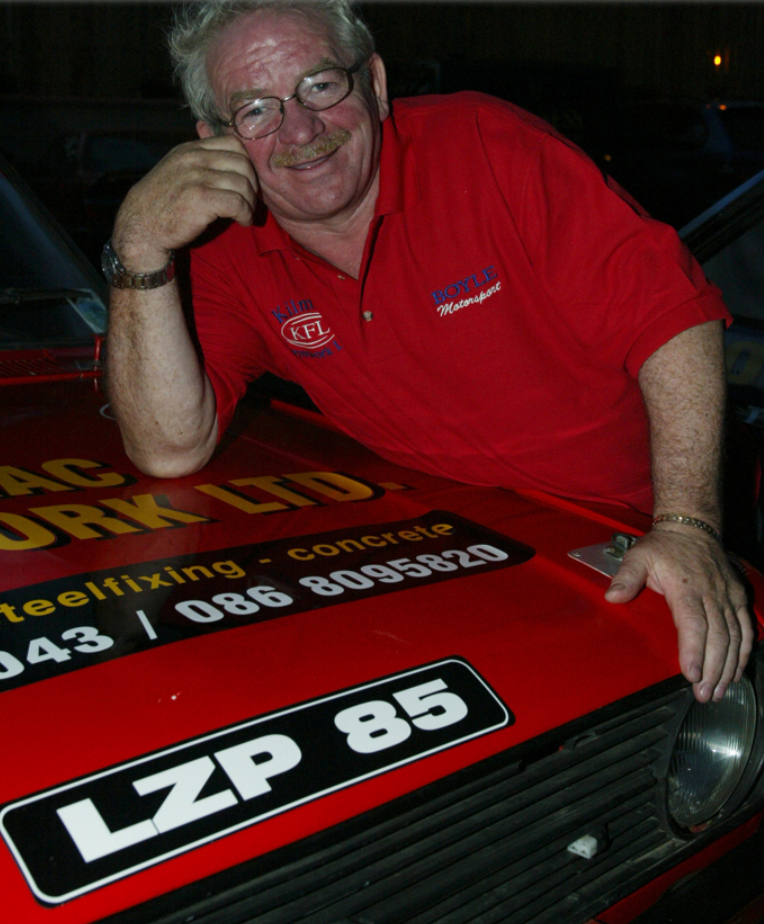 The late John Boyle at the Bonnet of his Escort Mk 2 LZP 85 which was originally created from an ex Russell Brookes Mk1 Escort Mexico. Photo Brian Mcdaid.

That year the escort suffered transmission problems and the young Donegal crew were forced to retire.

Boyle then built a new Mk2, Ford Escort from a road-going Ford Escort 1.1 Popular and to that 1978 shell he transferred everything from Brookes old Mexico to produce that famous red LZP 85 Escort that John held onto all of his life.

In the very early 80s, the late Bertie Fisher landed on a wet Galway International Rally in an ex Monte Carlo wide track Mk 2 Ford Escort which started its life in the Ford Works Team workshop built for Russell Brookes.

It also appeared on the Circuit of Ireland in the hands of Billy Coleman in blue, sponsored by Ford of Ireland.

Donegal’s Vincent Bonnar then purchased the ex Brookes’ RS 1800 from Fisher which was to give Bonnar his first-ever outright win on the Donegal International Rally in 1983, Making himself and Seamus Mc Gettigan the first all Donegal crew to win the event, Thanks to the Ex Brookes Escort.

I always was a massive fan of Brookes for years. A group of us went to see him and all the other big names of the day at the full 5 days Circuit of Ireland, staying in Chimney Corner which was the starting point, on the Thursday night before the start.

On a Friday morning, I slept in and was last down for breakfast.

The place was packed, my crowd were jammed around a table with no room for me to sit with them.

A waiter set up a makeshift table for me in the middle of the floor, much to the amusement of my so-called friends who were roaring over and taking a hand at me sitting on my own.

Suddenly they all went quiet, as out of my view Russell Brooks walked into the restaurant decked out in his full “Andrews Heat for Hire” race suit and was faced with the same seating problem I had, he landed at my makeshift table and ask if the seat opposite me was free. 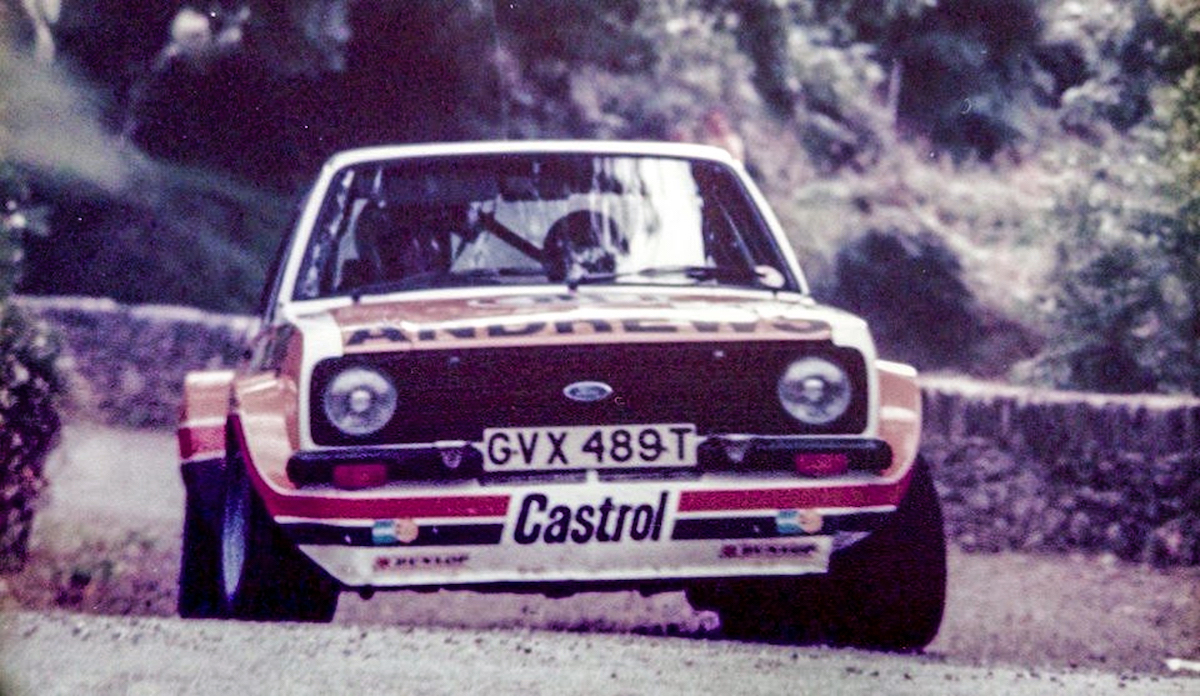 Russell Brookes in his RS 1800 which went on to win the Donegal Rally in the hand of Donegal Vincent Bonnar and Seamus Mc Gettigan.

I nearly covered him with coffee trying to get the words out, “Aye, No bother Russell, work away there,” I replied as if I was on first name terms with him all my life.

My friend’s mouths dropped as they watched Brooks and me sitting yapping and enjoying a yarn over breakfast.

Over that rally weekend, I name-dropped Brookes at every opportunity to the crew of spectators that were watching the rally with me.

“Me and Russell were saying.” or “Brooks was telling me…” that sort of thing.

In 1991 another ex Brookes Ford landed in Donegal this time in the hands of Donegal’s James Cullen, who also competed in Brookes’ old RS1800 GVX 489T for a few seasons.

Now It was an ex-works four-wheel-drive, Cosworth Sierra.

A car that also was driven by the late Colin McCrea. As well as Russell Brookes. On the run-up to the Isle of man rally that year James had the car in Donegal to familiarise himself with it and when testing down at the back of Muckish. 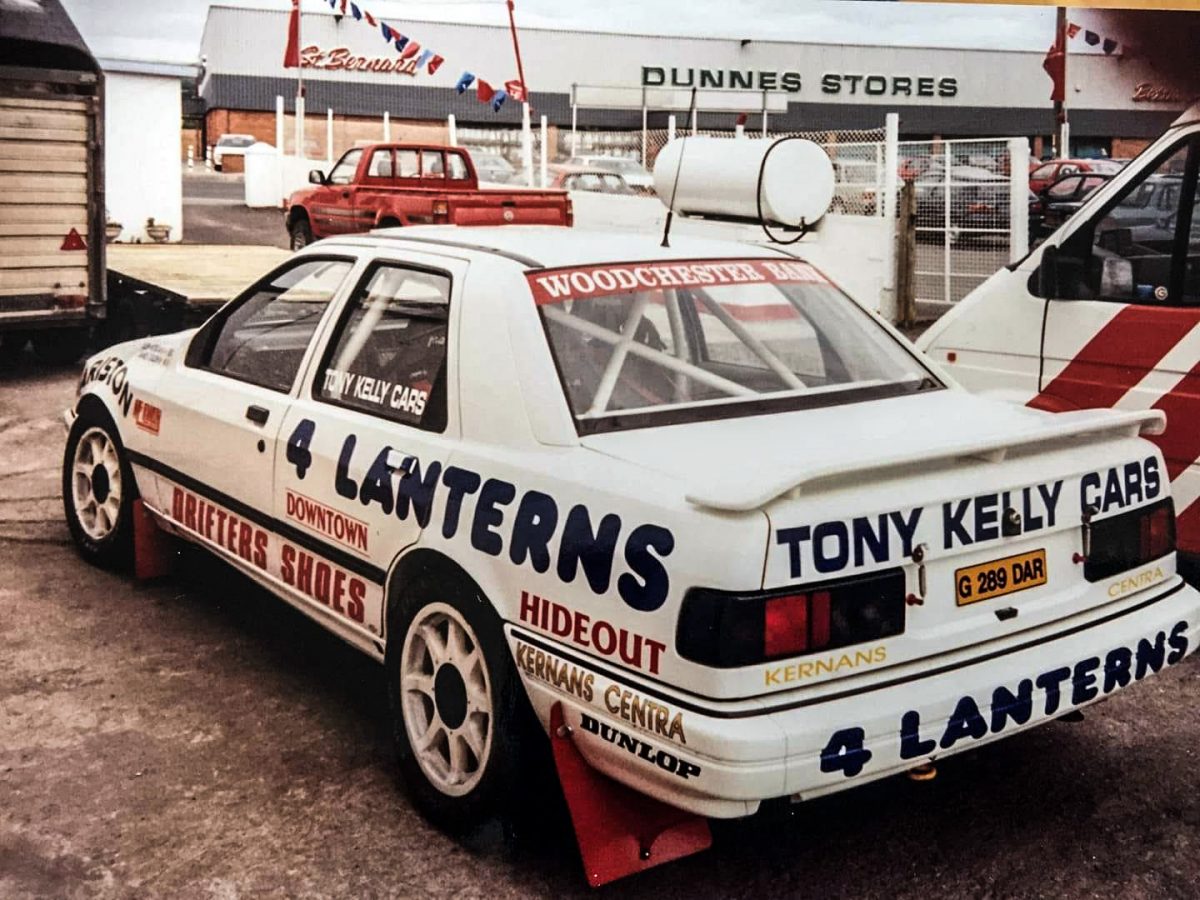 On a September’s evening, the ex Russell Brookes Sierra was put through its paces and I was on duty to get a few photos of Cullens new car and his sponsors at the end of the test session.

James asked if I would like a go for a run with him in the rally car which I gladly excepted and we set off down the road all strapped in for a fast run over Muckish.

There are two things that I remember from the day.

One was that James swapped seats with me and let me drive this state of the art rally car back over the mountain pass, and the other memory that still sticks with me was that of the late Frank Grimes, who was one of James Cullen’s principal sponsors from the Four Lanterns, out on the hillside that day, who captured a old black and white photo of me and James ready to head off in the ex Brookes Ford into the hills of Donegal. 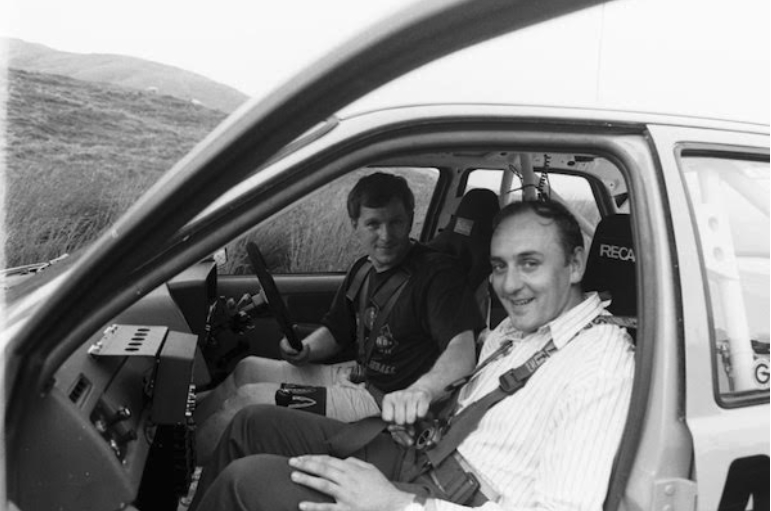 James Cullen and our motoring correspondent Brian McDaid in 1991 in an ex Russell Brookes Works Ford Four-wheel-drive Sierra on Muckish. Photo by the late Frank Grimes

Chances are there are far more ex-Russell Brookes machinery that made it way to Donegal over the years be it Fords, Talbot Sunbeams , DTV Vauxhall Chevettes Dealer Opel Teams Manta’s to name, but a few as Russell Brookes could sit in any car and get results, which were all painted in his signature Andrews Heat for Hire Colours. They were instantly recognisable.

The first spectators from Donegal who were big Russell Brookes fans were the Orr brothers from the mountain top in Letterkenny, they even had a few cars painted in the Brookes colour scheme back in the day but we were unlucky not to find a photo of one of them this week.

We do have a photo one oner of them old sun-visors from the seventies “Rally with Russell Brookes” thanks to Noel Orr for the photos of his old two-door Ford Escort, which had a Mexico engine fitted under the bonnet, an engine not unlike that fitted of the first Ex Brooks car that came to Donegal that the Late John Boyle from Manor purchased all them years ago.