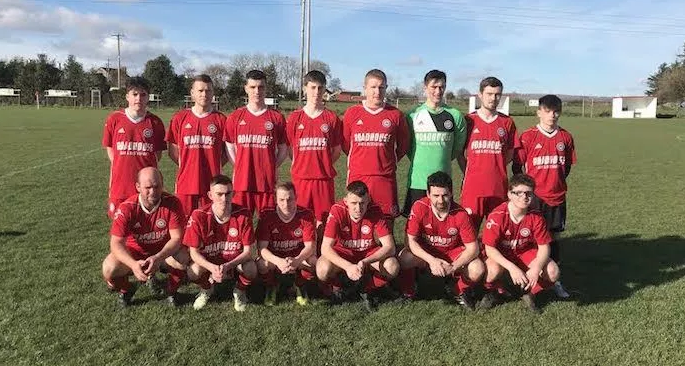 CAPPRY Rovers made it five wins out of five as they defeated Bonagee United in the Donegal League Premier Division today, while Raphoe Town were the big winners, scoring SEVEN goals away to Glenree United.

Cappry started the stronger and created numerous chances but good defending and goalkeeping by the visitors kept the home team from scoring.

Calvin Bradley opened the scoring for Cappry in the fourteenth minute when he got on the end of a free-kick. Bonagee went in search of the equaliser but the Cappry defence held firm.

Bradley got his second and Cappry’s second goal in the 19th minute with a header to the corner of the net. Bennie Gallen in the Cappry goal made a few good saves to deny the visitors.

Noel O’Donnell gave Bonagee a lifeline on the stroke of half time when he headed home following a series of corners.

Cappry went further ahead in the 50th minute when Sean McBride received the ball and he beat the defence and crossed the ball to Alan Gethins who scored to the corner of the net.

Bonagee tried to reduce the deficit creating numerous chances but to no avail.

Cappry’s fourth goal came in the 79th minute when Sean McBride received a pin point cross from Aaron Kelly, he beat the defence to once again cross for Alan Getins to score his second. Bennie Gallen made a wonder save in the 82nd minute to keep the score as it was.

Alan Gethins and Calvin Bradley were best for Cappry. Goalkeeper John Carr was best for Bonagee.

Cranford came out on top in this local derby with Kevin Doherty scoring the winner with 15 minutes to go. In a dull first half Cranford looked the more likely to score only for some fine goalkeeping by John Matthews in the Milford net.

At the start of the second half Cranford created a few good chances but the Milford defence made a few important blocks in the box and also cleared the ball off the line.

The first goal came on the hour mark when Cathal Mc Gettigan burst forward and drove the ball to the top corner from 20 yards.

Five minutes later a penalty was awarded to Cranford. Chris Carr calmly slotted the ball right down the middle of the goal.

The winner came from a corner and overall Cranford deserved the 3 points. Best for Milford were John Matthews and Cathal Mc Gettigan and best for Cranford were Kevin Doherty and Andrew Mc Fadden.

Glenea came out on top in this local clash, making sure all three points remained in Glasserchoo.

It was Gweedore who stuck the first blow in the 12th minute when Eamonn McGee managed to deliver a great cross from a tight angle and veteran Tomas Diver got on the end to finish high to the net.

Within three minutes Glenea had a chance to equalise when Ciaran McFadden found space, his powerful shot was well saved by Michael McKelvey in goals for Gweedore.

The equaliser did come in the 18th minute when Mark Harley made a great run to the by-line and his inch perfect cross was met by Ciaran McGeady who picked out the top corner.

Ciaran McGeady found himself through on goal again five minutes later, but not realising he had time, his hurried effort drifted wide.

Gweedore were unlucky not to be in front again in the 37th minute, Odhran Mac Niallais unleashed a 30-yard strike that rattled the crossbar and Tomas Diver failed to capitalise on the rebound. T

he second half started with Ciaran Mc Geady having a strike from 12 yards with Mc Kelvey getting strong hands on it, happy to concede the corner.

Glenea got their second goal in the 57th minute, Ciaran McGeady who was a thorn in the Gweedore defence all afternoon was brought down in the box and Darren Ferry made no mistake from the resulting penalty.

In the last 10 minutes both teams had chances to add to the scoreline.

Gweedore had Ciaran Mc Hugh clip the post with a strike and Mac Niallais making Joe Coll pull off a top save while at the other end, McGeady and Ryan McFadden made the Gweedore keeper pull off a few good saves. Ciaran McGeady and Odhran Mac Niallais were the standout players on the day.

This game kicked off at a cold but dry Darney Park and Swilly pushed from the start, creating a chance after only six minutes which was headed over the bar.

Two minutes later Corey Byrne had to be at his best to get down to save to his right from a rasping shot. The breakthrough came for Swilly in the 18th minute when a shot from James McCahill found the back of the net.

Ten minutes later Swilly doubled their lead when Marty McDaid found the net after a mix-up in the Dunkineely defence.

Swilly took advantage of their dominance ten minutes from half-time when Tyler Dunnion got on the end of a cross to slot home.

Dunkineely started the second half better but had few chances and Swilly extended their lead in the 55th minute when a corner was saved on the line only for Marty Doyle to convert the rebound.

Swilly added another goal on 63 minutes, having been awarded a free kick on the edge of the box Tyler Dunnion stepped up and drove the kick under the Dunkineely wall and into the net.

Swilly added their final goal ten minutes from the end when Matty Sweeney found the net.

Dunkineely pushed for a goal and were awarded a free-kick from 20 yards which Mark Hutchinson hit, his effort was destined for the bottom corner but the Swilly keeper got down well to push the ball away.

A good team performance from both sides.

Raphoe took this game by the scruff of the neck and played some fine passing football throughout earning themselves a deserved win.

Raphoe took the lead after 15 minutes when a shot from Kyle Mullin hit the net and they got their second goal five minutes later when DJ Kelly swivelled on the edge of the box to find the top corner.

Glenree were competing well around the pitch but couldn’t find a defence splitting pass to punish the visitors.

In the 34th minute Raphoe got their third when a free-kick was whipped in an ended up in the net.

The visitors again started the second half sharply and got their fourth goal from Paddy Kelly when a flick on at the near post landed right on his head to nod into the net in the 56th minute.

The next goal came through DJ Kelly when he skipped past a few defenders to find the bottom corner in the 58th minute. Kelly completed his hat-trick in the 68th minute from the penalty spot.

The final goal of the game came in the 84th minute when Kelly did well down the wing and found Darren Hughes who finished well.

Man of the match was John Manus Caldwell.

Deele Harps scored twice in each half to collect three points from their visit to Carrickboyle.

They deservedly led 2-0 at the break but didn’t have thing all their own way as Gweedore United levelled within ten minutes of the start of the second half. But Deele were strong and went on to get two further goals to claim the points.

The game was a hard-fought encounter. Liam O’Riordan went close early on for Whitestrand with Ross Hamlyn replying for Lagan.

Strand’s Darren Ferry then forced Damien Mc Fadden into a fine save. Liam O’Riordan broke through on 15 minutes to open the scoring for Whitestrand.

They doubled their lead on 30 minutes when Kevin Loughrey converted a penalty. At this stage Whitestrand were well in control. Lagan began to get their act together and responded with John Rodgers heading home a Ross Hamlyn free-kick.

The second half was a keenly fought with Lagan pressing hard for the equaliser. Josh Hay got on the end of a Ronan Carlin cross but Kyle Byrnes saved well. He then produced another fine save from a Ross Hamlyn free as Lagan pushed forward.

Whitestrand then scored a crucial third with a swift counter-attack, Kevin Loughrey raced through from halfway to score.

Lagan responded again with Ross Hamlyn scoring from another penalty. The final twenty minutes was end to end with Josh Hay and Jack Canning going close for Lagan with Darren Ferry and Kevin Loughrey threatening for Whitestrand.