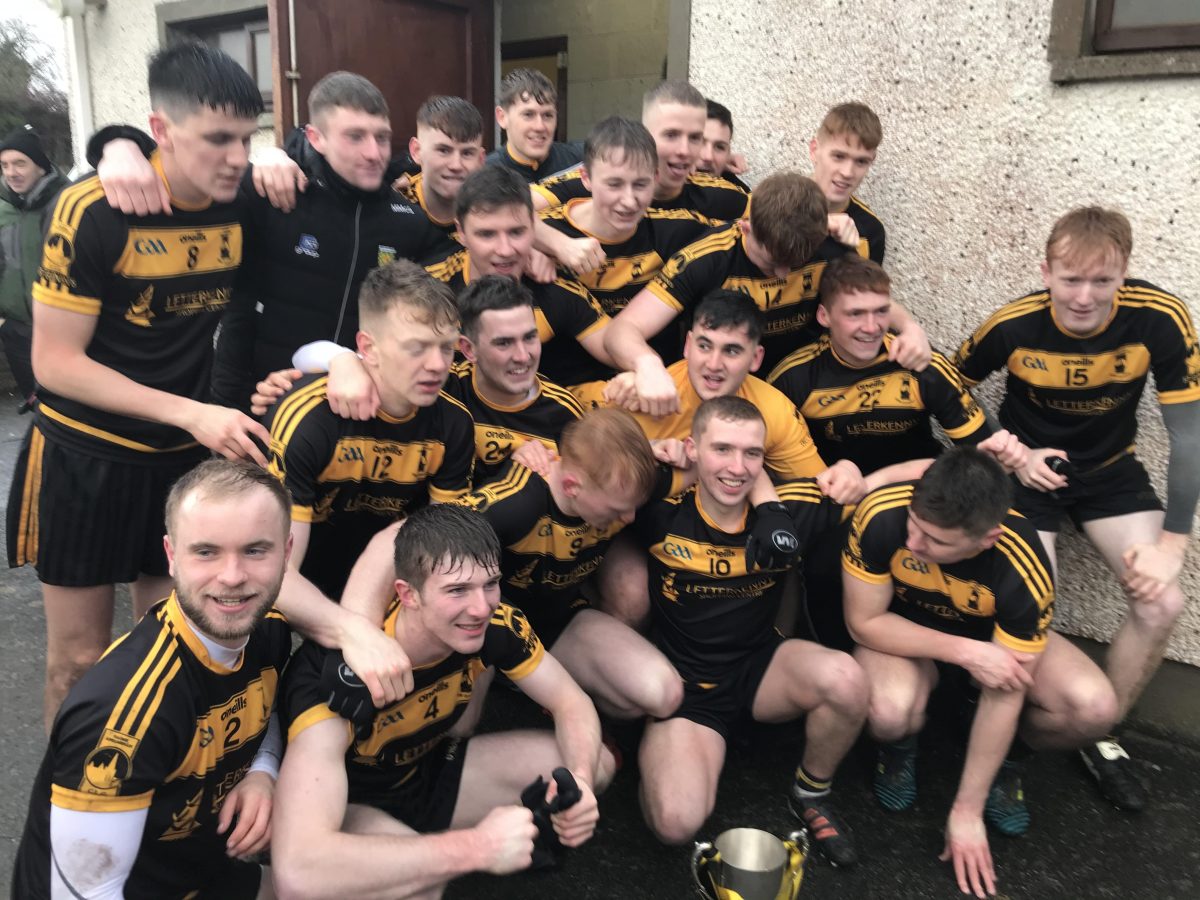 ST EUNAN’S made it back-to-back successes at County Under-21 with a comfortable win over Naomh Conaill at St Mary’s Park in Convoy.

Niall O’Donnell, the Donegal forward, kicked 1-3 from play with Padraig McGettigan knocking over 1-1 to compliment   the Cathedral Town team’s defence who produced an incredibly discipled performance – and the result was beyond doubt from the early part of the second half.

Naomh Conaill lost both Eoghan McGettigan and Oran Doherty to red cards – second half blacks adding to first half yellows – late on.

O’Donnell scored three first half points and was joined on the scoreboard by Padraig McGettigan and his brother Sean, whilst the only point that Johnny McLoone’s Naomh Conaill managed was when Eoghan McGettigan was on the mark on 18 minutes.

Jeaic Mac Ceallabhuí was black-carded in first half injury time for a blatant pull-down on Kevin Kealy and off went one of Naomh Conaill’s most influential players.

The Letterkenny side went in at the break with a 0-5 to 0-1 lead. Conditions could’ve been worse  initially and were probably feared worse although that said, it was awkward enough at times for both sets of players.

At half-time, there was a rumble of thunder and lightning and match referee Marc Brown knew he’d have to keep his wits about him as it was almost dark at 10 minutes to two and on went the floodlights and the second half was impossible with a gale force wind and umbrellas almost getting ripped from their shafts.

Two  St Eunan’s grabbed two goals at the start of the second half put St Eunan;s 2-5 to 0-1 ahead. Naomh Conaill had shown their durability to come from 10 points down and defeat Killybegs in the semi-final and they needed snookers again in Convoy.

The first of those goals was somewhat fortuitous. as Padraig McGettigan slapped home a dropping ball from John Kelly, who was looking to score a point.

Then, two minutes later on 35, O’Donnell clipped in off the underside of the crossbar as St Eunan’s nipped possession from Naomh Conaill as they tried to work it out from the back.

Nathan Byrne pointed a free on 37 minutes for Naomh Conaill’s second point of the day, as the rain receded once more. St Eunan’s were very firm at the back with so many of their players having had experience of the senior championship this season, where they were undone by none other than Naomh Conaill by a point in the semi-final.

Sean Roarty cleared off the Naomh Conaill line from Sean Halvey with nine minutes to go to deny St Eunan’s a third goal. Two minutes later, Eoghan McGettigan was sent off for a black-card offence – adding to his first half yellow – for a trip on Brian McIntyre.

McIntyre brushed himself down to add a point from the next passage of play and John Kelly added a point soon afterwards.

Naomh Conaill did manage a late goal from Nathan Byrne on the turn to give their support some sort of consolation. However, at the other end, O’Donnell pointed, as did Ciaran Moore. Oran Doherty was given his marching orders for taking out Niall O’Donnell in the lead-up to the score.