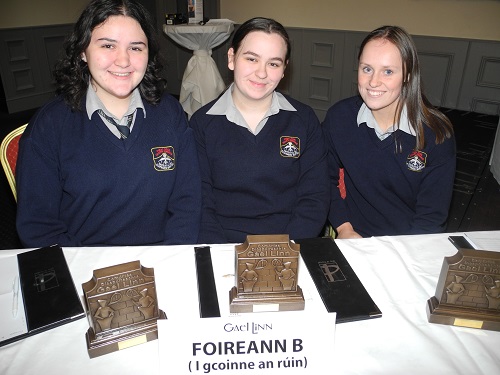 The senior debating team from Pobalscoil Ghaoth Dobhair were one of two teams chosen to advance to the All-Ireland finals of Comórtas Díospóireachta Uí Chadhain 2020.

The Regional Finals were held in the D Hotel, Drogheda last week.

The finals will take place on January 22, 2020 and are most likely to be held in Galway.

‘Tá todhchaí gheal roimh an Aontas Eorpach’ (The European Union has a bright future) was the motion down for debate and as expected, Brexit was mentioned once or twice!

Afterwards, it was announced by the adjudicators, that the two teams that would be joining the other two teams from Connacht and Munster, in the All-Ireland senior finals, were Pobalscoil Ghaoth Dobhair and Coláiste Eoin from Dublin.

Recognising the high standard of debating achieved by all the participants, Gael Linn presented awards to each speaker on the night.

Almost 50 teams have taken part since the beginning of the school year.