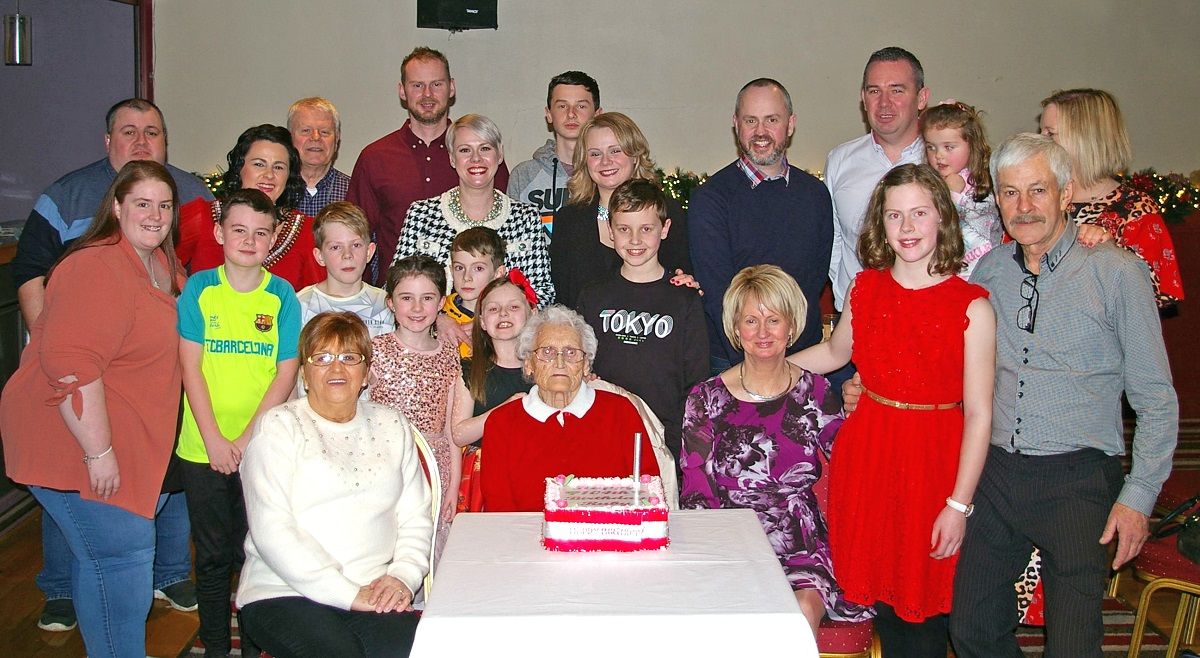 The popular Castlefinn native, who is one of Donegal’s oldest residents, rang in the New Year on Tuesday at Arena 7 Letterkenny as she marked another birthday achievement.

Born in 1915 to George Crawford and Elizabeth (nee McBride) of Castlefinn, Ruby has lived a long and interesting life. She was the eldest of five children and worked in Porter’s Shirt Factory from the age of 14 to 62.

She married her childhood sweetheart James Druce in 1956 and the couple were well-known for travelling around the town in James’ Honda 50. James sadly passed away in 1970.

Still an active lady, Ruby made the headlines in October by visiting the cinema for the first time in 80 years. A keen film and TV enthusiast, Ruby was treated like royalty on her outing to see Downton Abbey at Century Cinemas Letterkenny. 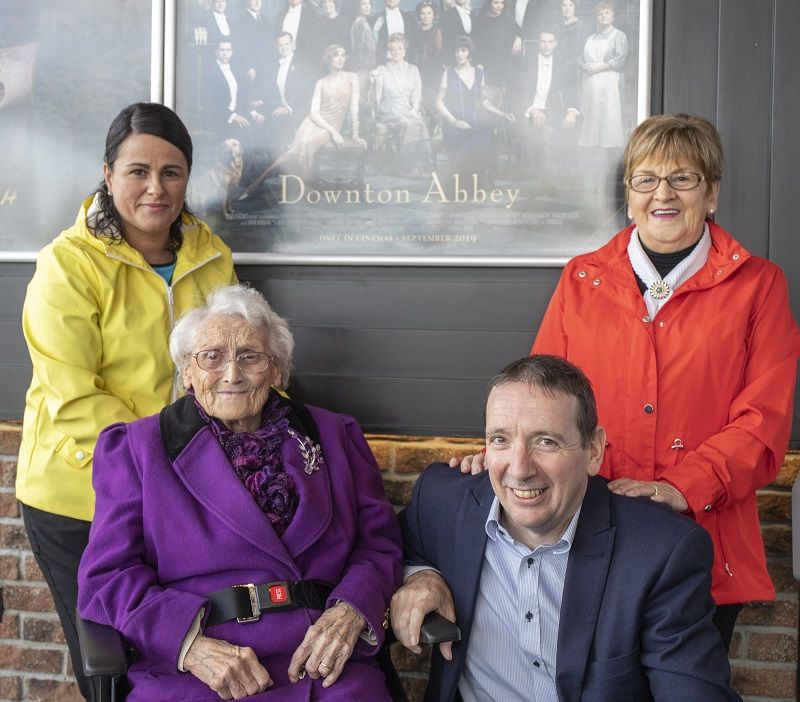 103 yr old Ruby Druce with her god-daughter Donna and niece Margo being welcomed to Century Cinema’s by proprietor Mark Doherty on her first vistit to the movies since 1944. (North West Newspix)

Tuesday night’s party was attended by over 25 family members – and four generations.

Ruby’s family and two nieces Margo Butler from Letterkenny and Carmel Harron from Castlefinn organised the party, but it was Ruby herself who booked the event with Arena 7 owner Enda Nicholls. Ruby has had four birthday parties at the venue and was kindly presented with a hamper from the Arena7 team on Tuesday night. 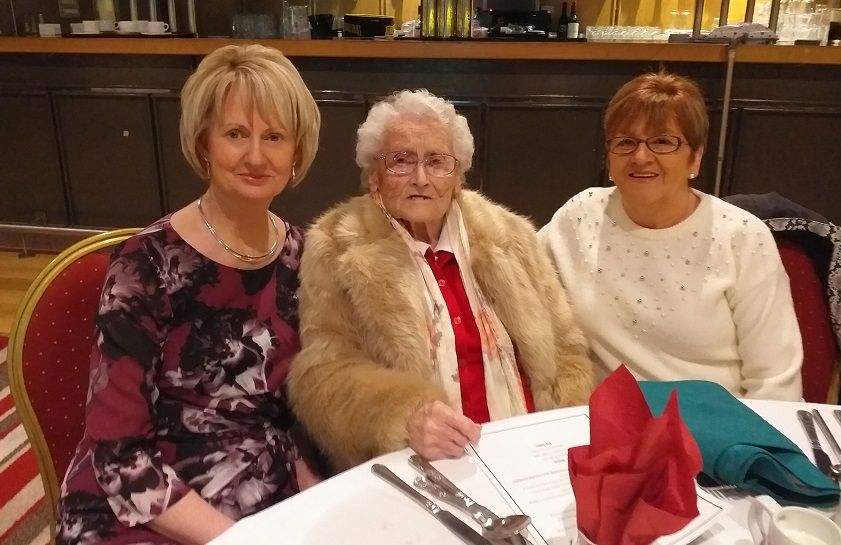 Ruby with her two nieces – Carmel Harran from Castlefinn on left, Margo Butler from Letterkenny on right

“Ruby is an extremely popular lady who always gets a lot of visitors. Her phone never stopped on the day of her birthday and we had a brilliant night celebrating at the party,” Martin said.

A highlight for Ruby was celebrating the party with so many young people around her. “Ruby loves children and they love her. We have 11 grandchildren in the family and she can name them all,” Martin said. 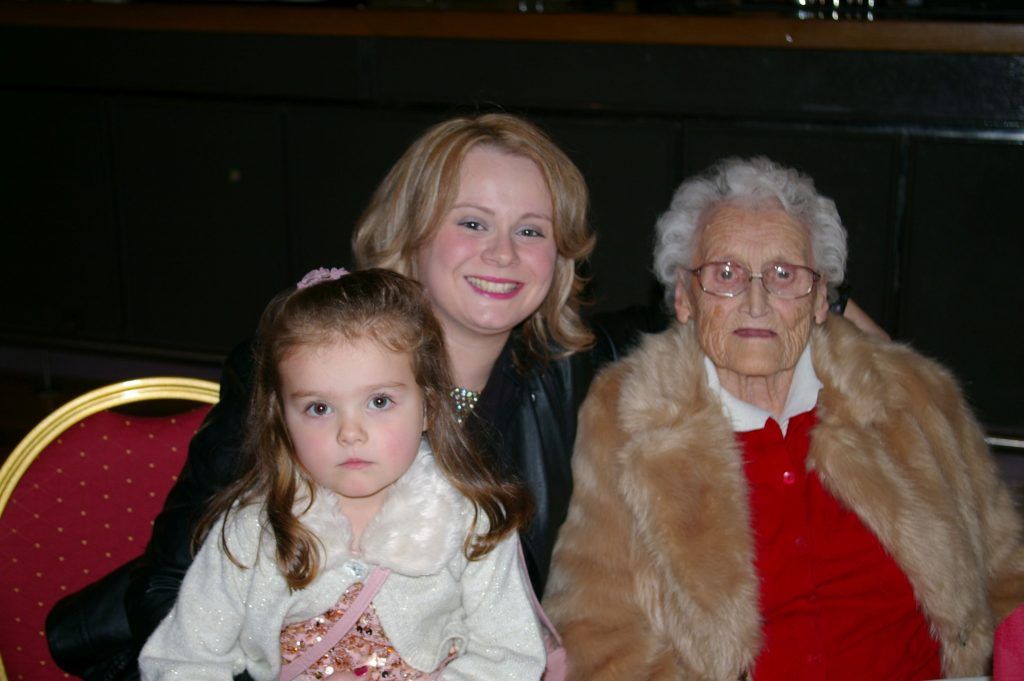 Included among the children was young Ruby, aged 4, who also celebrates her birthday in December. With almost 100 years between the two Rubys, it truly was a special gathering of generations.

Thanks to Martin Harron for sharing photos from the party.