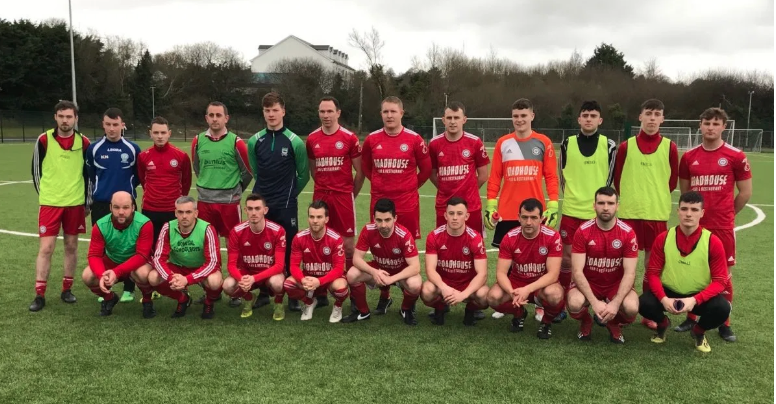 Donegal League – Convoy, Swilly press on in Divisions 1 and 2: Full roundup from today

Click here to read full report on this game

A Kieran Friel goal was enough to give the home side a hard-earned victory over Milford at Park View on Sunday.

Milford were the better team in the early stages and went close through Kyle Black and Mark Wilson but both efforts were saved by Chris O’Donnell in the Castlefin goals.

As the game progressed the home side started to get into it and had efforts through Friel and Barry Tourish. Castlefin took the lead in the 30th minute when a Barry Tourish through ball found Kieran Friel who calmly ran on to score.

Friel should have scored again just before the break but his shot went narrowly wide. Castlefin dominated the play in the second half but were restricted to long range efforts.

The home side went close to increasing their lead in the dying minutes of the game when a Raymond Foy shot from the edge of the box was tipped around the post by Milford keeper Caolan McGettigan.

After a scoreless first half at Station Road where Cranford defended superbly throughout it was all level at the break.

It wasn’t until the 67th minute that the dreadlock was broken when Kevin McHugh turned well and fired home to put the Tigers ahead.

It looked like Kildrum would see the game out but there was a late sting in the tail as Cranford finished off a fine move with just three minutes remaining in the game to earn themselves a valuable point.

Click here to read a report on this game

Keadue Rovers continued their excellent home form with this vital win which moves them well up the table. On a blustery day for football it was Drumkeen who were the brighter team at the start and on nine minutes their full back was just wide with an effort that went low past the far post.

On 14 minutes Keadue had an effort ruled out for offside. The visitors were again unlucky when Lee Guthrie’s effort was saved by Danny Rodgers and the follow up was also saved.

Keadue were content to hit on the break and it was a scrappy end to the opening half with both sides cancelling each other out.

The second half started with a hail shower making conditions difficult but both sides to their credit moved it about well. Adam McCaffrey went close on 53 minutes when his effort went over the bar.

The visitors again pressed hard around the hour mark but didn’t create much in the way of chances. Keadue almost had a penalty on sixty-five minutes when Calum Boyle was fouled but the subsequent free kick was saved.

Keadue made two subs on 70 minutes and they were to bear fruit as five minutes later some good interplay between brothers Maurice and Peter McGee led to the keeper being rounded and sub Ryan Connors tapping into an open net.

Drumkeen reacted well and were almost level only for an excellent Danny Rodgers save. Keadue made it safe on 87 minutes when a long ball over the top found Adam Mc Caffrey who laid it off to Ryan Connors to finish low to the net for a 2-0 win.

A team effort from a plucky Drumkeen outfit while best for Keadue were Calum Boyle and Maurice McGee.

The ‘71 got back to winning ways with a good win over a youthful St. Catherines side at Rab’s Park.

It was the away side who started the better and Eoin Mc Gonigle in nets kept the home side in it with both Gallagher and Barker both testing him. Then a free kick from 25 yards was pushed over by McGonigle.

This got the ‘71 into life and Michael Sweeney broke the deadlock on 18 minutes when he fired home from six yards after great work from Patsy Friel.

Evan Hewitt was causing the away defence all sorts of problems and he cooly sent Johnny Nanny through on goal where he beat Mullan from 10 yards to double the lead.

Kerrykeel maybe should have had the game out of sight in the later stages of the first half but Mullan made some great saves to keep St. Catherines in the game.

St Catherines started the second half well but Paul Friel and Marty McAteer were keeping them at bay. The home side were guilty of missing a few guilt edge chances but Mullan again came up with some great saves to deny both Sweeney and Little.

With 10 minutes to go St. Catherines got one back when a free from Gallagher somehow ended up in the net, by-passing everyone. Kerrykeel did not panic and Paddy Carr made the points safe when he finished well after great work from Michael Sweeney.

The win keeps the ‘71 in the mix for promotion and on this showing St. Catherines should have enough to stay in the division.

Glenea picked up all 3 points at Glasserchoo with a comfortable win over Drumoghill. Both teams exchanged early chances with Sean McBride shooting over in the fourth minute for Glenea while Conor Temple forced a save from Shaun McClafferty.

Glenea broke the deadlock in the 26th minute when Shaun Curran put in an inch perfect cross for McBride and he made no mistake from two yards with his header.

Drumoghill came close in the 40th minute when Richie Moore played in Anthony Doherty but McClafferty was up to the challenge with two quick saves.

Glenea were the first to threaten in the second half when McBride played in Michael Barry but Liam O’Donnell got down well to push the shot wide. Within a minute Glenea were two up, Kevin Mulhern drilled a low ball across goal and John McFadden tapped in.

Glenea were in control now and made it 3-0 in the 60th minute, Martin Maguire split the defence with a great pass and Darren Ferry fired past the ‘keeper.

Drumoghill kept battling and came close with Richie Moore, but couldn’t find a way past McClafferty in nets.

Luke McCarry is claiming goal number four for Glenea after his shot from the edge of the box was dropping into the goal after the keeper got his hand to it, John Mc Fadden tapped in to make sure even if it was already over the line.

Rodgers managed to get a consolation goal for Drumoghill in injury time with a good strike from 25 yards. Shaun McClafferty, Martin Maguire and Sean Coll best for Glenea while Richie Moore stood out for Drumoghill.

With Greenbrae unplayable, this match was switched to Dreenan. There wasn’t much action of note early on as the game got choked around midfield.

Ballybofey took the lead after twelve minutes when Michael Lafferty flighted a perfect ball into the Lifford penalty area and Shaun McGowan headed it past the diving keeper.

Five minutes before the interval Damien Glackin doubled the Ballybofey advantage when he chipped the Lifford ‘keeper.

Lifford did have a few decent spells during the second half and they wasted a great chance to get back into the game when they shot wide in a one on one situation.

Kevin McBrearty was best for Lifford with Ballybofey producing a decent team performance.

Convoy took the lead on the 8th minute with JP Malley squaring the ball for Darren McElwaine to tap the into the net. Malley came close to making it two for the home side, shooting from 25 yards with the ball coming off the crossbar.

Rathmullan dominated possession for the rest of the first half but the Convoy defence held strong keeping Rathmullan came close to equalising before half time but their shot went wide.

Paddy Dolan made it two for Convoy in the 48th minute with a great solo goal turning the defender, running up the wing and firing home.

Convoy had a few more chances with Garry Brolly forcing a great save from the Rathmullan keeper and Anthony Bogle shooting wide. Paddy Dolan got his second of the match in the 90th minute with a carbon-copy of his first goal.

Gweedore United started the game with a strong breeze to their backs and they pushed forward early on and were rewarded after 9 minutes when Sean McFadden shot from the right and past Corey Byrne in the Dunkineely goal.

Gweedore scored again when they took advantage of sloppy play by Dunkineely and broke away, this time it was Ciaran McFadden who found the back of the net.

Gweedore kept up the pressure and just before half-time Corey Byrne was forced to save, pushing a shot away from his top left corner.

Gweedore started the second half well. Despite Dunkineely’s best efforts they could not take advantage of the wind. In the 75th minute an excellent shot from Ciaran McFadden from outside the box beat Jamie Kelly who had taken over from Corey Byrne in the Dunkineely goal.

Gweedore added a fourth goal when they were awarded a free kick on the edge of the box, Mark Mc Fadden despatched it to the Dunkineely net.

With 10 minutes to go Jamie Kelly saved at his right-hand post but was unable to hold onto the ball and it broke into the path of Ryan Kelly who scored.

It was Dunkineely who scored the last two goals the first when Dylan Henry turned the ball into his own net before Adam Duddy scored the consolation goal for Dunkineely when he struck in injury time.

The match started at a frenetic pace and Swilly won an early penalty which was superbly saved by Whitestrand keeper Paddy Kelly.

Swilly were undeterred by this early setback and they took the lead from a corner that was headed in by Marty McDaid. Taking the lead spurred Swilly on and they doubled their lead at the mid-way point of the half when McDaid got his second with a shot from outside the box that creeped into the bottom corner.

Just before half time Swilly inflicted a killer blow when McDaid again took aim from outside the box and fired into the top corner to complete his hat-trick.

Whitestrand started the second half well but Swilly were first to every ball and the fourth goal came when a ball was fired across the box and it bounced in off an unfortunate Whitestrand defender. The game was over as a contest at this point but credit to Whitestrand who kept going and Kevin Loughrey fired home through the keeper’s legs.

The game largely petered out after this and Swilly went back to Ramelton with a well-deserved victory.