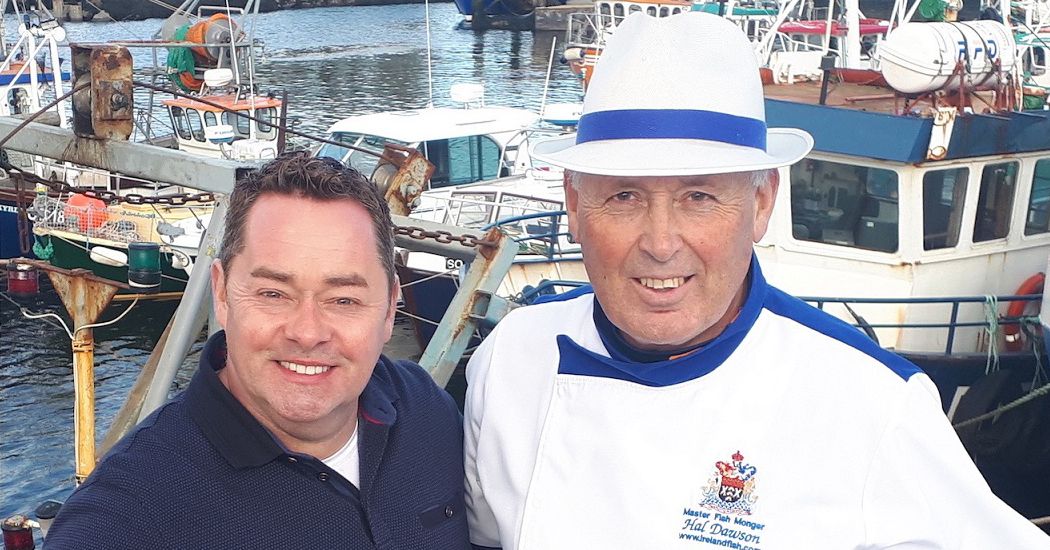 Celebrity Chef Neven Maguire will reveal how Donegal is making waves in the seafood sector when he features the county on his RTE series this month.

The dining delights of Inishowen will be the focus of an episode of ‘Neven’s Irish Seafood Trails’ on RTE One on Wednesday 12th February.

The programme will see Neven travelling to Ballyliffin, Moville and Greencastle to meet well-known food ambassadors and producers. He’ll also make time for a little adventuring on scenic Lough Foyle.

World Chowder Champion Chef Kieran Duey Doherty of Nancy’s Barn in Ballyliffin will feature on the show to share his winning recipe with Neven.

Neven’s next stop will be Greencastle, where he meets Hal Dawson, Ireland’s Master Fishmonger. Hal will give Neven some expert tips on fish filleting using locally caught fresh hake; from finding the right type of knife, to some simple and useful cuts.

Neven with Hal Dawson in Greencastle

At Moville, chef Brian McDermott, who runs the Foyle Hotel, will show Neven his recipe for locally sourced pan-fried John Dory with a green vegetable broth and bacon.

Staying in Moville, Neven will then head to Inish Adventures for a sea kayaking trip with instructor Adrian Harkin. This is his first attempt at sea kayaking, and after a slightly hair-raising capsize, Neven will paddle out into the beautiful waters of Lough Foyle.

There are sure to be a few familiar faces on this episode of Neven’s Irish Seafood Trails and viewers are set to learn some fascinating facts about Donegal seafood. Tune in to see the show on RTE One, Wednesday 12th February at 8.30pm

Donegal will be catch of the day on Neven Maguire’s seafood series was last modified: January 29th, 2020 by Rachel McLaughlin