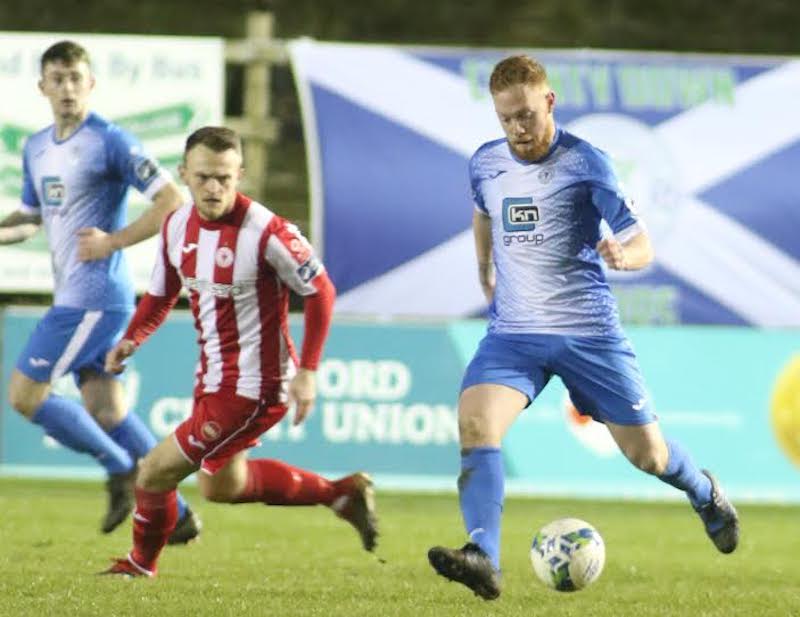 NEW SIGNING Karl O’Sullivan struck the only goal of the game to give Finn Harps an opening night win over Sligo Rovers.

O’Sullivan pounced on 56 minuets to break the deadlock as Harps scored a deserved win.

Last season, it was the 16th game and a 3-0 win over UCD in May before Harps recorded their first Premier Division win.

In front of a healthy attendance of 2,237, Harps made sure that their followers didn’t have to endure the same long wait to get off the mark.

Eleven minutes into the second half, O’Sullivan bundled home at the back post after Dave Webster headed down from Mark Coyle’s delivery.  Coyle whipped across goal after taking a short-corner fro the quick-thinking Ryan Connolly.

O’Sullivan’s goal ensured that there wouldn’t be a first scoreless League meeting of these teams by the Finn at the 43rd attempt.

Sligo appeared energised by the concession and Ronan Coughlan might have done better when he drove well over the top on 65 minutes.

Sligo threw in former Harps winger Jesse Devers for the final 13 minutes, but the Showgrounds men couldn’t claw it back.

In added time, Ronan Murray drew a fine save from Mark Anthony McGinley, who kept his sheet clean.

In 2019, McGinley kept nine clean sheets in 19 appearances to win the club’s Player of the Year Award – and shutouts will be vital once more to survival hopes.

Harps showed plenty of early promise and Sam Todd, his neck muscles stretching to their limits, was just unable to connect with a Cretaro free while O’Sullivan twice tried his luck from distance, but was unable to trouble the Sligo ‘keeper Ed McGinty.

O’Sullivan was one of five debutants included from the off by Horgan with Shane McEleney, Kosovar Sadiki, Webster and Connolly.

Sligo boss Liam Buckley fielded newcomers Darragh Noone, Will Seymour Teemu Penninkangas and Garry Buckley, but the Bit O’Red were slow to start.

Buckley had a chance to test home net-minder McGinley in the 24th minute, but a tame attempt failed to trouble the Ards man.

Moments earlier, Finnish defender Penninkangas couldn’t get the necessary direction on a heads from a Noone free kick.

With the second half still warming up, O’Sullivan squeezed home and Harps were on their way.

Horgan named new striker Cameron Saul among the Harps subs. The 24-year-old Englishman arrived from a spell in America and his clearance just arrived in the last 24 hours, but the Londoner didn’t feature.

Harps are back in derby action again next Friday as they face Derry City at the Brandywell.