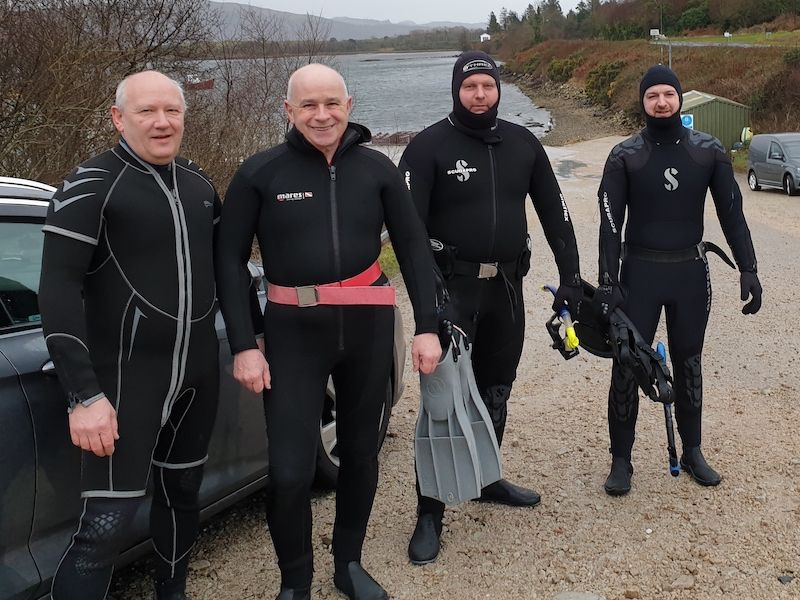 FOR Sheephaven Divers it was a case of another weekend – another storm, this time Storm Dennis but nonetheless it was business as usual as the divers got into the water on Saturday and Sunday mornings.

As boat dives were out of the question the divers returned to the safety of snorkels in Cranford on Saturday and PortnaBlagh on Sunday.

The Cranford snorkel went south along the shoreline, which falls away to over two metres quite steeply from the water edge and consists of a mixture of shale, sand and eventually silts in deeper water.

As would be expected in this area there were good numbers of Shore Crabs and it would be also be expected to see small Wrasse and Gobies, along with the various types of Anemones and Sea Squirts.

In-water conditions were cold at around 5 degrees Celsius but clear at over 5 metres horizontally, conducted in over 30 minutes.

Sunday mornings forecast also prohibited any thought of a boat dive, but with a southerly air flow PortnaBlagh harbour was well sheltered from the predicted weather.

The divers were able to safely conduct a 30 minute snorkel in the general area of the harbour and while there were bit of a chop thrown up by the wind there was no swell breaking into the shore.

Water temperature here was slightly warmer at 8 degrees Celsius, but there was no in-water visibility at all.

As the message of open water swimming gets out to more and more people, whether that is for general health or just a sense of well-being, past members of Sheephaven SAC are returning to the club, all they need now is for some good diving weather to get the maximum out of their sport.

Another weekend, another storm for Sheephaven Divers was last modified: February 17th, 2020 by Chris McNulty