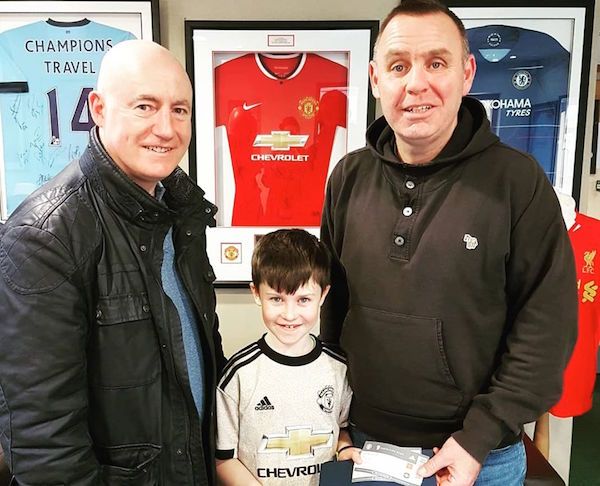 Premiership tickets round off amazing week for daring Daragh!

Could the week get any better for cheeky Daragh Curley from Glenswilly?

Er, well actually it has.

We were first to bring you the amazing story of how the 10-year-old Ma Utd fan wrote to Liverpool manager Jurgen Klopp asking him to lose more games because it was making him sad.

Amazingly, the German wrote back and said that he could as millions of Liverpool fans wanted his team to win.

Daragh’s story went viral after it appeared on Donegal Daily and he appeared on media outlets around the world.

He even appeared on RTE’s Late Late Show alongside his dad Gordon’s hero Roy Keane!

But the icing on the cake came at the weekend when the big-hearted people from Champions Travel in Letterkenny presented with tickets for a Man Utd game in May.

He was presented with the tickets by Champions Travel’s Kevin Ward.

Sadly it’s not Anfield but no doubt Daragh (and whoever he chooses to bring!) will enjoy his trip to Old Trafford.

Premiership tickets round off amazing week for daring Daragh! was last modified: February 24th, 2020 by Stephen