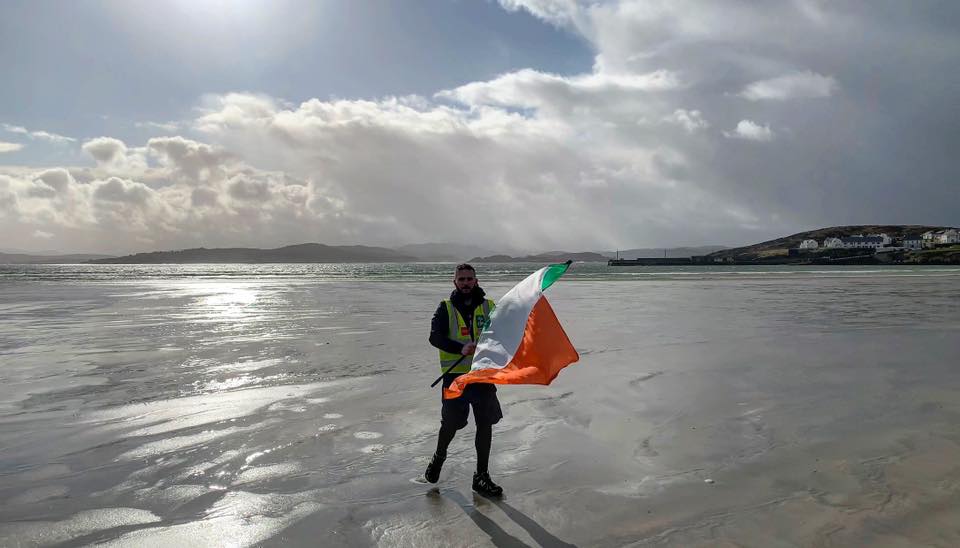 Listen: Noah Coughlan on his mission as Run For Rare reaches Donegal

NOAH Coughlan, a 33-year-old American, is half way on a unique run through Ireland, during which he hopes to to raise money for BUMBLEance and raise awareness for rare diseases.

Noah embarked on Run For Rare on February 15 in Cobh, County Cork , and will finish his voyage in Dublin on St Patrick’s Day.

This weekend Noah arrived in Downings before making his way to Letterkenny on Sunday. Today, he ran to Ballybofey and will move onto Donegal Town and Bundoran before heading to Galway. The run concludes with a run across from Galway to Dublin to complete a ‘perfect number 4’, Cobh-Downings-Galway-Dublin.

“I see a lot of culture, a lot of history and very nice people,” he told Donegal Daily/Donegal Sport Hub in Letterkenny today.

“I’m really looking forward to seeing the rest of Donegal.

“I’ve been plotting this for five years. I ended a run in America on Independence Day. I wanted to honour my grandfather and honour the Coughlan name so what better place to finish than Dublin on St Patrick’s Day.”

Back in 104, Noah’s grandfather, Myles, left Ireland never to return.  Part of his ambition is to honour the memory of his grandfather. Noah now has dual citizenship and today was day 17 of 32.

He said: “Every day is dedicated to an Irish family. The ultimate goal is to raise the profile.”

The 965km journey is currently taking in Donegal and locals are encouraged to donate to help BUMBLEance.

Launched in 2013, BUMBLEance is the children’s national ambulance service, with a fleet of 13 ambulances. It is the world’s first interactive ambulance purposefully designed for children, with the capacity to operate the latest medical equipment and inter hospital communication systems,

A feature length documentary to chart Noah’s exploits is currently in production.

His welcome to Ireland happened to be the wettest February on record!

“Storm Dennis was packing winds of 150 miles per hour when I left Cobh,” he said on a much drier morning in Letterkenny. “Locals have said that February was unusually wet. The first week was sideways wind and sideways rain on very narrow roads.”

Noah has a backpack on his back and will be, where the roads and conditions allow, be flying the Irish tricolour. Give him some support if you meet him on your travels!

Listen: Noah Coughlan on his mission as Run For Rare reaches Donegal was last modified: March 2nd, 2020 by Chris McNulty