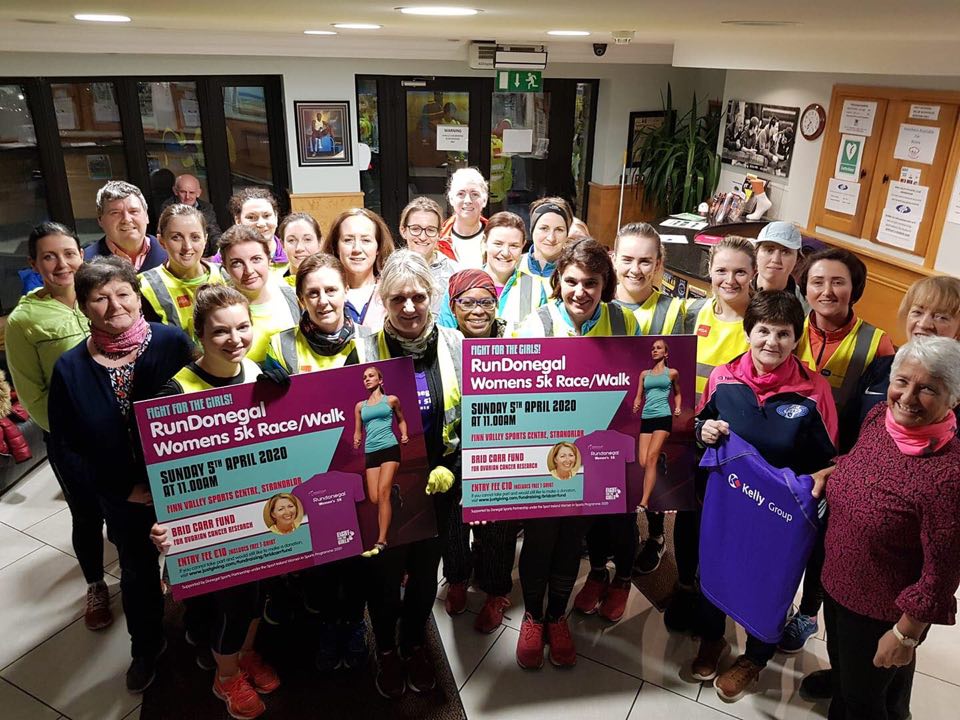 Countdown is on for 2020 RunDonegal Womens 5k

THE countdown to the annual Rundonegal Womens 5k at Finn Valley Centre is on its April 5th at 11am with registration on the day until 10.30am.

This event now being hosted for a number of years has benefitted various charities over the years and indeed raised €7513  in 2019 on behalf of Ovarian Cancer research in memory of Brid Carr, a young Glencolmcille lady who sadly passed away some years ago.

Brid a nursing sister in Great Ormond Street Hospital was misdiagnosed on a number of occasions ,. The proceeds will again go to Ovarian Cancer Research, per Breakthrough Cancer Research and sponsorship once again for the sought after t-shirts has been generously supplied by the Tim  Kelly Group, London.

An announcement will be made on the Rundonegal Womens 5k Facebook site re pre-entry in the coming weeks.

The first group of runners to add their support were the Finn Valley AC women pictured here with event organisers.

It’s important to point out this venture have co-funded a three-year Phd scholarship in in Ovarian Cancer Research and that Ovarian Cancer rates in Ireland are 24 per cent higher than the European average with 272 deaths each year yet survival rates have increased.

Race Director Grace Boyle said: “It’s an opportunity for the women of Donegal  to come join together and #Fightforthegirls”

Countdown is on for 2020 RunDonegal Womens 5k was last modified: March 5th, 2020 by Chris McNulty