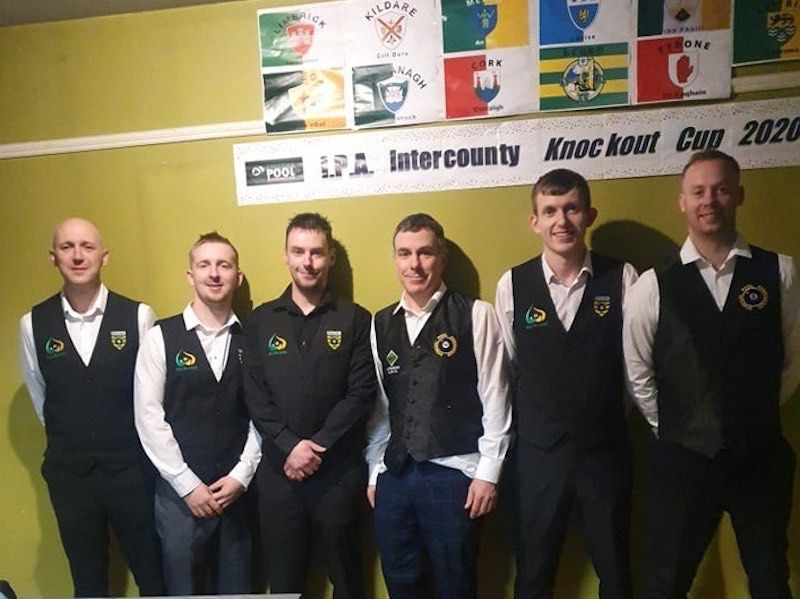 DONEGAL’S A team travelled to Kildare this weekend to compete in the Inter-County knockout cup and only two frames separated them from overall victory against Leitrim in the final.

The Donegal lads were optimistic about their chances, having recently won the RB Q-Sports Invitational Cup.

Indeed, the Donegal captain, Shaun Sharkey, has just returned from captaining the men’s Irish A-team at the European Championships in Malta, and Bundoran’s Liam Travers represented the Irish B-team at that event.

In the semi-final Donegal were up against long-time foes, Tyrone. The match was nip-and-tuck in the early stages, but the Donegal lads surged into a 10-5 lead by winning all five of their scotch-doubles matches. Tyrone fought back but Donegal kept apace with their resurgence to record a 13-9 victory.

The final saw Donegal face a very strong Leitrim contingent. The match ebbed and flowed or a long time until a surge by Leitrim saw them establish a commanding 11-8 lead. Donegal won the next two to keep them in touch, and the teams shared two more frames to leave it poised at 12-11 in Leitrim’s favour.

On table 1, Donal Curran took command of his frame and looked odds-on to level the match, but on the other table Jamie Gaffney from Leitrim cleared the table from his break to lift the title.

A disappointing end to the tournament for the Tir Conaill men but it augurs well for the upcoming All-Ireland Championships in Killarney, where the Green and Gold will be hoping to go one step further than their magnificent effort in reaching last year’s final.

Anyone interested in playing competitive pool and perhaps representing your county should be aware that the Donegal Pool Association run competitions and county qualifiers in Ballybofey’s Donegal Q Club. Further information is available on the Donegal Q Club Facebook page or by contacting Michelle Morris, 0861927910.