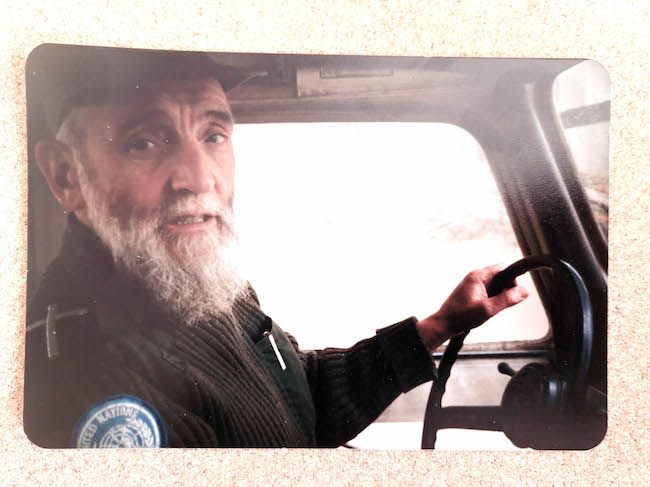 DD Motoring: A difficult journey ahead…..

A decade ago I had the job of driving my uncle Fr. Mark down to Ards from Letterkenny Hospital.

Little did I know that day it would be the last time we would ever travel the road together.

A few months before that I also drove Mark to Ards the first time he was sent home from hospital after his accident.

That day even though he was nervous about going home after spending the best part of a year in hospital, he deflected his fear with humour by jarring me on my choice of transport for this important journey.

His words that day were “A man like you with connections in the motor trade might have worked it to have a better yok on hand for this, a most important journey, and what did you land up at the front door of Letterkenny General hospital to take your recovering uncle home in, – an old battered up blue van.”

A photo from 1986 of Fr Mark with fellow soldiers at the living quarters damages by sharpnel in the Lebanon.

I could have told him that how practical and how easy I had thought it would be for him to get in and out compared to the lowered height of a roof of a family car but I knew he was only taking a wind out of me, so I said nothing.

As I eased the van slowly out over the speed ramps for fear of jilting his recovering neck injury the van died out. My uncle slowly rotated his elevated head carefully and slowly around to me, making full eye contact before saying “Don’t ask me to give you a push, now, Brian I’m in my pyjamas.” A fit of nervous giggles came over both of us which was probably more dangerous for his neck than the journey home itself.

On our last journey down from Letterkenny hospital also in another van he was still jesting about collecting him in a van.

On arriving in Ards that day for some reason I asked Fr. Mark did he do blessings on vans. He gave me a searching look that travelled far inside me. “Mmm, I do,” was his reply following by a short silence. “Well will you bless this van for me then?”

My grandfather’s old Ford van with my granny at the door in Letterkenny ready for the long trip to Cork to visit her son Fr. Mark.

In my mind, I was thinking it was the first time I had ever ask my uncle to bless any car or van that I ever owned.

For me, it’s different when your uncle is a priest. It wasn’t about disrespect, more about just asking more than anything else. Fr. Mark got out of the van and started looking around his pockets for something. “Is it petrol or diesel?” he asked. Panicking I replied “It’s diesel, why, what difference does that make?” “Not a bit difference,” Mark replied with a smile. “I’m only asking you about your van Brian. I’m not ready to bless it yet, I need you to go into the Friary and get some holy water for me.”

Frail in body but strong in faith that day as I watch Fr. Mark blessed my van and then shared a memory with me how his father and mother, sisters and brothers travelled from Donegal to Cork to visit him when he was going on for the priesthood, also in an old Ford Van.

Putting this motoring piece together these weeks I had no photos of Mark in any of the vans that were used to take him down to Ards those days, of worry covered by humour but I came across old photos on a different journey that Mark had travelled from his days in the Irish Army on overseas duties in the Lebanon.

The familiar face of Fr. Mark Coyle in Ards

One of those old photos with the round corners, still has the smell of printing developer and fixer has Fr. Mark behind the wheel of one of the Army jeeps taken in January 1988. I have a feeling that was his last tour of duty overseas. Another one taken in April 1986 with four local dignitaries at a gathering and there’s one of the living accommodation in the Lebanon which came under attack in his time there. Fr Mark never thought as a man of peace that his vocation would take him to a war-torn country but it did and he embraced the challenge.

In the weeks ahead we will all be at war of a different kind when we battle against the invasion of the Coronavirus, both medically and because of the unknown ahead a feeling of great fear. My memories of my uncle who I probably didn’t ask enough help from when he was on this earth will be one person that I’ll be thinking of a lot in these coming months to give me strength and some self-belief to battle in our very difficult journey on the road ahead.

Fr Mark with local dignitaries in the Lebanon