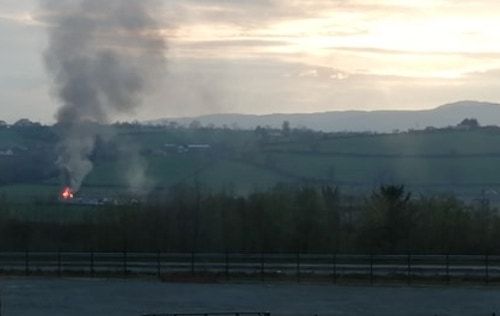 A FIRE has broken out at a disused caravan at the Big Isle near Manorcunningham.

Emergency services have been alerted to the blaze, which broke out within the last hour.

Residents nearby raised the alarm.

There are no houses in the immediate vicinity of the site, which is close to the Wonder Years Creche.

The fire comes just two days after an orange fire warning was put into place. The warning is to continue until midday on Tuesday, April 14.

The Department of Agriculture said: “Arising from current conditions associated with Atlantic high pressure systems a high fire risk is deemed to exist in all areas where hazardous fuels such as dead grasses and shrub fuels such as heather and gorse exist.

“Based on recent fire incidents, most ignitions risks appear to be associated with illegal burning of upland vegetation.

“There may also be increased ignitions risk on sites with public access arising from the forthcoming Easter Bank Holiday Weekend, depending on levels of usage under current movement restrictions.

“Fire behaviour is likely to be influenced by light to moderate wind speeds and may be further moderated by intermittent light rainfall in some areas during the lifespan of this warning.”