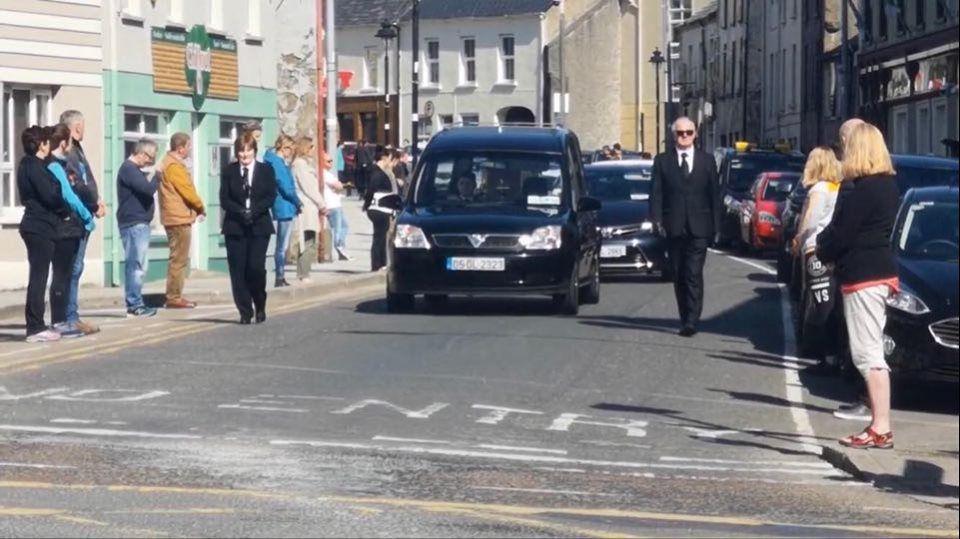 THE people of Letterkenny came out to pay a solemn tribute to Paddy MacIntyre this afternoon.

Observing physical-distancing measures, a guard of honour was form on the Main Street as Paddy’s remains were taken from his home at Ard O’Donnell.

Paddy had a huge passion for Gaelic Games and particularly the St Eunan’s GAA club and was an employee at the Mount Errigal Hotel for over thirty years.

A regular at Mac’s Deli, Paddy also enjoyed the craic in Blake’s Bar.  Poignantly, the hearse paused at Blake’s Bar for a moment’s reflection as Paddy was taken from his home at the ‘Burmah’ to his final resting place at New Leck Cemetery.

A funeral mass was celebrated by Fr Kieran Harkin at St Eunan’s Cathedral and streamed online for the public to watch with no access allowed during the coronavirus pandemic.

Predeceased by his parents Sarah and John, former editor of the Donegal People’s Press, Paddy is survived by his wife Catriona (neé Gallagher from Glenties), son Brian, daughter Sinéad, brothers Martin, Sean, Eunan and Peter, sisters Geraldine, Mary O, Brid and Anne and a large circle of relatives and friends.

Video below by Brian McDaid …