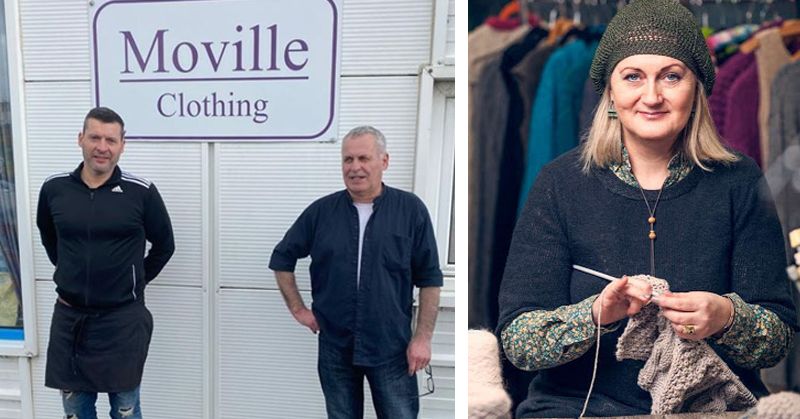 Goodwill from Moville leads to ‘Ireland’s Soundest Town’ of the month award!

A PPE production project in Moville has led to the town being named as Ireland’s Soundest Town in the month of April.

Moville was crowned with the ‘Soundtown 2020’ award this morning on TodayFM as part of their national competition with Cadburys Ireland.

The award was earned after the town rallied together for the #PledgeScrubs campaign for frontline workers battling Covid-19. The project, started by Donegal designer Edel MacBride, involves sourcing funds for shirt makers ‘Moville Clothing’ to create scrubs for staff at cost price.

The campaign has so far raised an amazing €67,000 with high quality scrubs being delivered across the sector.

And that innovation and support for the campaign caught the attention of the Soundtown judges.

Local man Michael Skelly put forward a nomination for Moville in March and forgot all about it until he got the call from TodayFM on Thursday. He was told the judges had narrowed it down to two towns, and the winner was eventually revealed today on Weekend Breakfast with Alison Curtis.

“I nominated the town for the great community spirit, always pulling together to support anything,” Michael told Donegal Daily.

As the first Soundtown 2020 winner, Moville will be rewarded with a special plaque and a massive hamper of Cadbury goodies this month. They will also be put forward for a chance to win the overall ‘Ireland’s Soundest Town’ prize when it is announced in November. The overall winner will get €10,000 to spend on a community project of their choice.

Click here if you wish to support the #PledgeScrubs project: https://www.gofundme.com/f/pledgescrubs

Goodwill from Moville leads to ‘Ireland’s Soundest Town’ of the month award! was last modified: April 18th, 2020 by Rachel McLaughlin