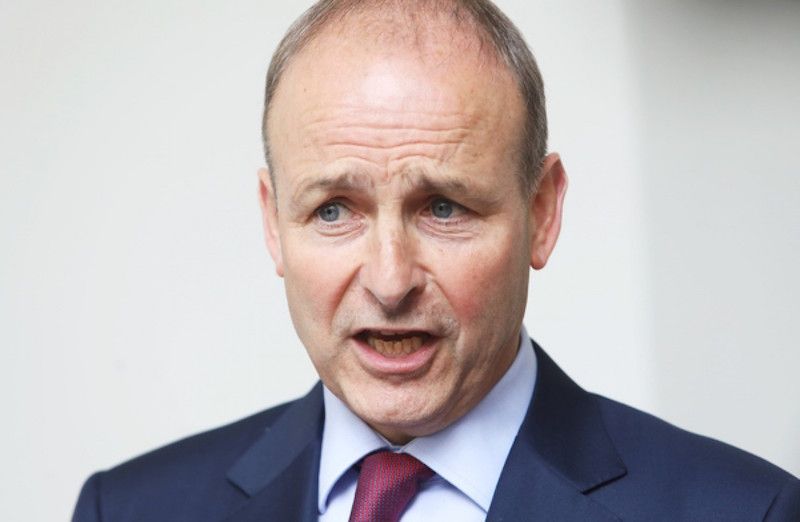 written by Staff Writer May 4, 2020
FacebookTweetLinkedInPrint

Fianna Fail councillors in Donegal have written to party leader Micheál Martin warning the party will be “destroyed” in the next general election if it goes it coalition with Fine Gael and the Green Party.

The councillors, represented by Councillors Ciaran Brogan and Patrick McGowan, said they wanted to express their opposition to the plans to form a national government.

The letter says that councillors have consulted grassroots members oin Donegal about their opposition to a coalition with Fine Gael and the Green Party.

And they say the same people who collect for the party at church gate collections feel “used” because of the lack of consultation over the issue of any future Government.

The following is a copy of the letter, seen by Donegal Daily, which has been sent by Fianna Fail councillors in Donegal to Micheal Martin.

We write to you in an attempt to highlight our grave concerns and bitter disappointment at the ongoing attempts by the Fianna Fáil leadership to form a coalition government with Fine Gael.

As the elected members of Donegal County Council, we are at the frontline of both membership engagement and community feedback and interaction. Thus, we feel very well placed to provide you with the “on the ground” feedback from County Donegal on the proposed formation of a government between Fianna Fáil and Fine Gael. Naturally, we would have hoped to have been consulted on this crucial matter, but we now feel compelled to articulate our views.

At the outset, it is worth mentioning that we all canvassed in GE 2020 under the backdrop of Fianna Fáil, providing for a change and ruling out any coalition with Fine Gael. In fact, as party leader, you gave a commitment (January 2020), which we all agreed with, ruling out entering any government with Fine Gael on the basis that it did not represent change. As such, our message to the voters in Donegal during our canvass was predicated around “change” and “not forming any government involving Fine Gael” after the election.

Furthermore, the Fianna Fáil organisation in Donegal, who has been in contact with each of the Councillors, feels completely ignored by the Fianna Fail leadership and headquarters on this matter. Accordingly, we are using this correspondence to address some of our concerns. For instance, the grassroots members of our party work tirelessly and always answer the call of duty during elections and church gate collections, and are now articulating to us that they feel completely “used” to canvass and collect money for the party, while not being consulted on any key matters such as this government formation process.

We feel that our membership should have been consulted prior to any formal formation talks with Fine Gael. Clearly, this did not occur. However, we implore you to ensure every member of the party, using the OMOV process, has an equal input to the formation of any government, including the one suggested in this communication.

Critically, we have formed the deeply held view, which we hope you will acknowledge and appreciate, that if Fianna Fáil now proceed to form a government with Fine Gael, we will:

2. Completely undermine our republican, historical and established principles which have served Fianna Fáil well since our formation;

3. Allow Sein Féin to staunchly establish themselves as the main opposition party and alternative political or establishment force in waiting; and,

4. Cause our party to be destroyed in forthcoming electoral outings, losing many seats, presumably at the 2024 local elections.

This correspondence is written following a wide-ranging discussion amongst the Fianna Fáil councillors here in Donegal on the proposed FF/FG coalition. It is hoped that you as Uactarán Fianna Fáil, will take our genuine and deeply held views on board and act accordingly.

The recent engagement between Fianna Fáil and the Green Party around government formation also raises some further extremely concerning aspects worth highlighting here, given the anti-rural agenda of the Green Party. As you know, Fianna Fáil has always advocated for rural Ireland and farm families. The demise of rural Ireland and the agricultural sector under the last government has created unprecedented levels of rural-urban division lines in our country. For instance, the fabric of rural Ireland has been decimated over recent years with an anti-rural national development plan (Ireland 2040), the lack of adequate support for small farmers, the inadequate provision of universal broadband, and steps to prevent local people obtain planning permission for houses in their own townlands. Additionally, the lack of adequate investment into the rural County and Regional road network and rural towns has been crippling. Therefore, any move to include the Green Party and their urban-based and climate-centred agenda would further exacerbate the urban-rural divide and create further devastation to rural counties like Donegal.

As you know, Ireland and most of the countries worldwide are facing recessionary periods in the immediate future due to COVID. Therefore, those who enter the next government will have to introduce measures to bridge the fiscal gap.

As you will know, the current job losses far exceed anything we have seen before in Ireland. Unfortunately, this means unpalatable fiscal policy measures will have to be taken.

The next government will have to focus on how to pay for this outlay in the long run, while such fiscal corrective measures will come with highly negative electoral consequences for the prescribers. Contrary to the suggested “fairytale” giveaways contained in the rather abstract published framework document, taxes are most likely to rise, especially if expected demand for more spending post-COVID materialises.

Conversely, having taken all of these factors on board, we feel the best option for Ireland and Fianna Fáil at present is to engage in constructing a national unity government. Such a government would include all of the political parties and groupings, which would be time-bound. This would represent the mandate and responsibility placed on all who were elected to office in GE 2020.

Surely, if Fianna Fáil is interested in putting the country first, then such a proposal should be the only option under consideration. Additionally, it would have the benefit of insulating our party from electoral destruction at the next electoral contest.

I hope you will view this correspondence as a well-meaning, heartfelt and constructive communication. We believe the future of our country requires a strong and robust Fianna Fáil party to protect democracy, protect the vulnerable and strive for social justice at every turn. However, any coalition arrangement with Fine Gael would not only jeopardise and demolish this, but it would also change the democratic and political landscape in our country for the generations to come.

We sincerely hope you will take this impassioned plea on board.