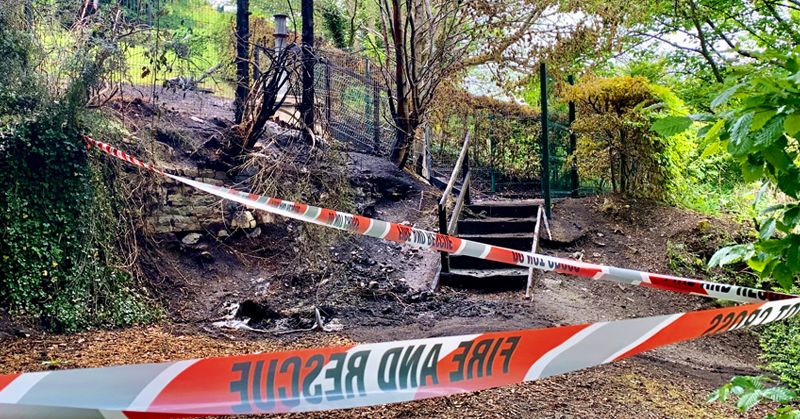 Gardaí are carrying out a full investigation to find those responsible for a fire at Letterkenny Town Park last weekend.

CCTV footage is being sought after a popular slide was destroyed in a blaze on Saturday night. The fire broke out between 9.30pm and 9.45pm.

The fire has been described as an ‘attack on the community’ and gardaí are treating the incident as an act of criminal damage. The scene remains cordoned off.

A number of lines of inquiry are being followed, including queries on the sale of fire accelerants in the local area in the lead up to the fire.

Gardaí say they will be calling to premises that sell accelerant to see if anyone bought small amounts on Saturday evening. Business owners and petrol station owners are also being asked to report if any persons called to their premises that evening and possibly filled a jerrycan of petrol.

Gardaí are also seeking all available CCTV footage from the park which will be viewed as part of the investigation.

A public appeal has been launched to urge anyone who was in the Town Park area between 9pm and 10pm on Saturday 9th May to contact gardaí if they observed anybody in the area. Gardaí would like to speak to anybody in the park between those times to see did they witness any groups or anyone on their own that seemed “a bit untoward”.

Meanwhile, the public is being asked to report any other information that may help gardaí identify the person/persons involved. People are being asked to report if they noticed a family member or housemate arriving home on the night in question with a smell of smoke or accelerant off them.

“Whoever started this fire, should they start a fire again elsewhere, the consequences could be life threatening,” warned Garda spokesperson Grainne Doherty.

Anyone who can assist with the investigation is being asked to call Letterkenny Garda Station 074-9167100 or the Garda Confidential Line 1800 666 111.