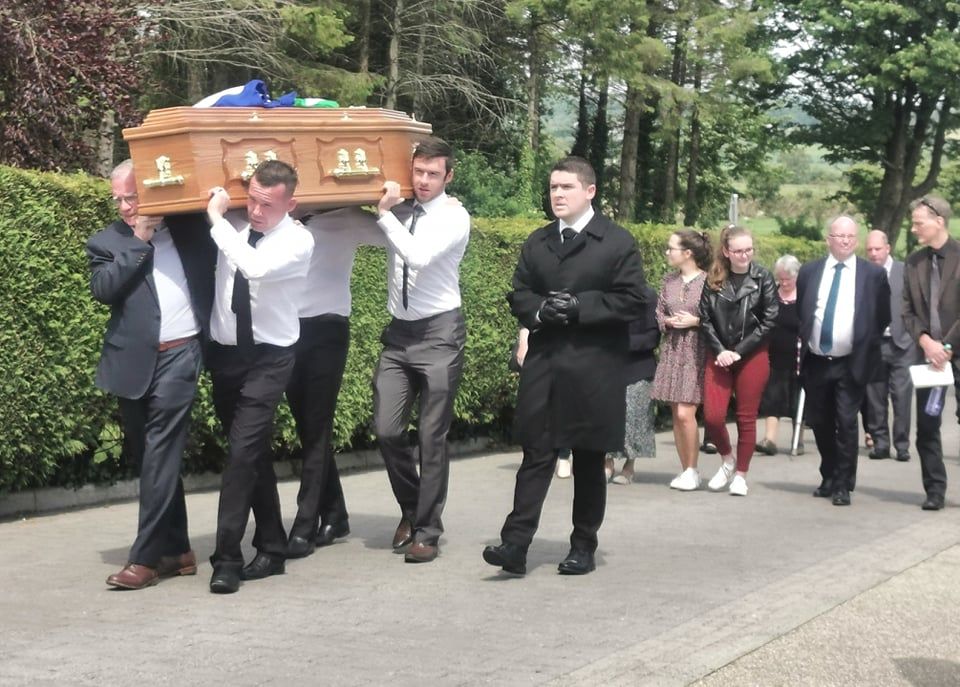 SOIL from his beloved Finn Park was placed on top of the coffin as the late Seamus McKelvey was laid to rest this afternoon.

The lifelong Finn Harps fanatic (77), late of Carricknamana, Killygordon, was one of Donegal’s best known and most loved football personalities.

A long and selfless service to Curragh Athletic was marked in 2011 when he was presented with a Lifetime Achievement award by the Donegal Junior League.

It was for his unwavering support of Finn Harps that he will perhaps be best remembered.

At Finn Park, Seamus McKelvey wasn’t simply a part of the furniture.  Rather, he was part of the very structure of the place; a grain of the very soil lowered into the grave with him today.

Following Seamus’ passing, after a battle with illness, former Finn Harps goalkeeper Ciaran Gallagher mentioned: “No matter what ground we went to in Ireland Seamus was always there.”

And that was the thing: Seamus McKelvey was ALWAYS there. He had supported Harps since before their admission into the League of Ireland in 1969 and rarely missed a game, home or away.

As Harps’ own tribute read, Seamus was there ‘through thick & thin, year after year’. He traveled the land with his trusted companions Seamus Gallagher and Harold Lindsay and he had ‘his spot’ at the wall in front of the stand at Finn Park.

Daren’t anyone watch a match from that perch, not that the chance ever arose given the promptness with which Seamus would arrive for games, well in advance of the warm-up, where a friendly smile would greet players and staff as they set about their work.

“He will be remembered as a proper football man,” Fr Frankie Lynch told his funeral mass at St Patrick’s Church, Crossroads this afternoon.

Jerseys of Finn Harps and Curragh Athletic adorned the coffin as Seamus was carried through a physically-distant guard of honour on route to the Church in the Crossroads sunshine. It was just the sort of afternoon he’d be out for one of his walks.

Legendary Harps goalkeeper Gerry Murray and current assistant manager Paul Hegarty were among those in attendance.

Seamus was married to Mary for 54 years – ‘a marriage made in Heaven,’ as Fr Lynch said – and he is also survived by son Declan, daughter Deirdre and a large circle of family and friends.

Fr Lynch said: “Mary was the love of his life and his two children were the apples of his eye.

“Seamus was an avid reader and encouraged his children to read.

“He kept a diary and he was a good record keeper, a good journalist in that he kept a journal of all the events of the club as well as having collections of photographs and results. Everything was collated. He visited the club on a daily basis to have a chat about matches, players and teams.

Seamus McKelvey at a function in 2008 with Ann Kelly, Mickey McGlynn and Gareth Reid

“He was a well-read man, who read books constantly and he consumed the newspapers.”

Seamus spent many years working at the Donegal Creamery and at Herdman’s factory. In later years, he worked on the FÁS scheme around the Crossroads and Killygordon areas.

At his native Curragh Athletic, Seamus served as the Club President and was a stalwart of the club for many decades, having served in roles from player to manager to administrator.

He was a trustee of the club and was one of the driving members who delivered the new facility for the club. His lifelong friends Frank Kelly and John O’Loughlin led the Curragh Athletic representatives to his funeral Mass today.

In paying tribute, Curragh said: “From the early seventies, Seamus has been an active member of the club, from Team Manager to Chairman, Secretary and Treasurer as well as groundsman in the early years of the club.”

During some of the early years, Seamus  was the chief organiser of the Curragh Cup and dined often on the story of how the draw was conducted. Quizzed on who was present, Seamus would smile: ‘Well, Mary and myself were there’. Pushed further on witnesses, Seamus delivered the classic: ‘Well, the television was on!’

An avid follower of all levels of Donegal football, Seamus – a goalkeeper in his own playing days who also won a senior championship medal with Sean MacCumhaills in 1963 – left an impression on anyone who met him.

Former Harps midfielder Pat McCann relayed a week in the life from August 2013, which provided a small snapshot of Seamus’ unstinting support.

Harps were drawn at home Cobh Ramblers in the FAI Cup and had the same opposition away from home the following week. Harps were rocked when John Meade’s injury time goal, cancelling out Kevin McHugh’s opener, meant a Monday night replay at St Colman’s Park and two away trips to Cobh in the space of five days.

Almost 900 kilometres and a 12-hour round trip on week days was a daunting assignment for the squad, lest of all supporters. “Seamus was the first face seen standing at the wall both times,” McCann recalled.  “Unbelievable supporter and an unbelievable man.”

Harps legend Kevin McHugh remembered a ‘complete gent who was always in a positive mindset.’ Even in the darkest days, his enthusiasm for the club never dipped.

McHugh said: “One of the best supporters I had the pleasure of meeting back in 99 and almost every game in between home and away.”

It wasn’t just at Harps that Seamus was known.

His affectionate persona, not to mention the knowledge with which he spoke about the game – and Seamus knew football – meant he struck a relationship with many opponents.

“I got to know Seamus & his two mates better than any other opposition fans in the league. He always had plenty of abuse for me during the game but then a wink & a smile when it finished. The league has lost one of its great characters.”

For those of us reared on a diet of Harps, he was a constant presence whose encyclopaedic knowledge was told with an exuberance that made the heart beat a little faster, regardless of what nugget was being extolled.

As Harps historian, Bartley Ramsay put it: “It’s not going to be the same going to games anymore.”

A part of Finn Harps died on Thursday.

It was only right that a bit of the old place went with him.

A part of Finn Park goes too as Seamus McKelvey is laid to rest was last modified: May 31st, 2020 by Chris McNulty