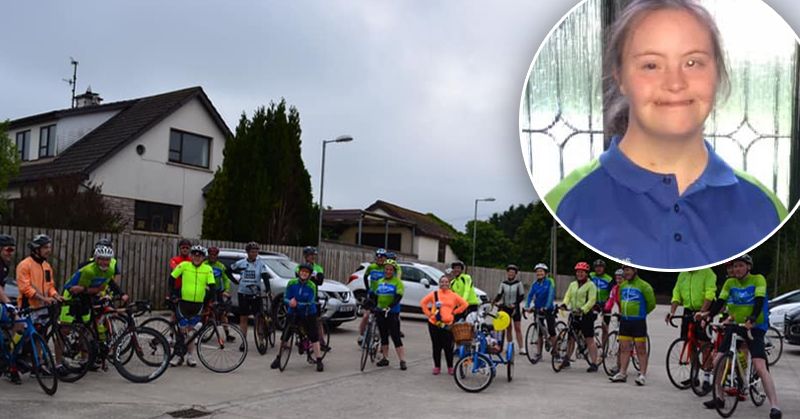 The Finn Valley cycling community was out in force this week to celebrate the end of Amy Alexander’s hugely successful charity challenge.

Amy, aged 19, completed her own ‘Tour De Cross’ by cycling 15km around her home area in Killygordon in two weeks.

The challenge was in aid of the Drumboe Respite Centre, where Amy herself attends regularly. And she smashed all targets by raising an incredible €3,700 on GoFundMe.

Amy’s two weeks of adventures in all weathers captured the admiration of the entire community. Her final kilometre on Tuesday became a major event, with the Finn Wheelers Cycling Club pedalling out to surprise her and accompany her to the finish line.

“Amy was on a high after the finale of her challenge, she loved the excitement of seeing people standing out clapping and cheering for her and she really felt like a superstar,” said Luiseach Alexander, Amy’s cousin.

Not only did Amy cycle every day, but she became the star of her own video series to promote the fundraiser. The entertaining videos chronicled Amy’s outstanding training and discoveries along the way.

Luiseach said: “Amy is sad that her 15k challenge has come to an end, but is quickly cheered up by watching her videos back and hearing a few well-done comments from the Facebook page. She understands that just because the challenge is over doesn’t mean she won’t be going on her daily cycles.”

The support of the community was a major factor in helping Amy stick to her goal along with her well-earned rewards, Luiseach adds.

“Anyone who knows Amy knows she has a massive sweet tooth and there were more than a few treats put in her basket on cycles from her loyal supporters in the Cross, this was definitely one of Amy’s highlights! As well as when she cycled down to get herself a milkshake, probably one of the quickest cycles she did.”

Amy and her ‘backroom team’ would like to send a huge thank you to everyone who has commented, shared and donated to the worthy cause of Drumboe Respite centre.

“A massive thank you to the Finn Wheelers who accompanied Amy on her final kilometre, as I’m sure they could tell this was a massive surprise for Amy who enjoyed every second of her moment in the spotlight. To everyone who has beeped and cheered and gave Amy big waves not only on her final cycle but every cycle during the challenge, it meant the world to her and made her look forward to her cycles every day,” Luiseach said.

Amy recorded her own video to thank everyone after this unforgettable journey: