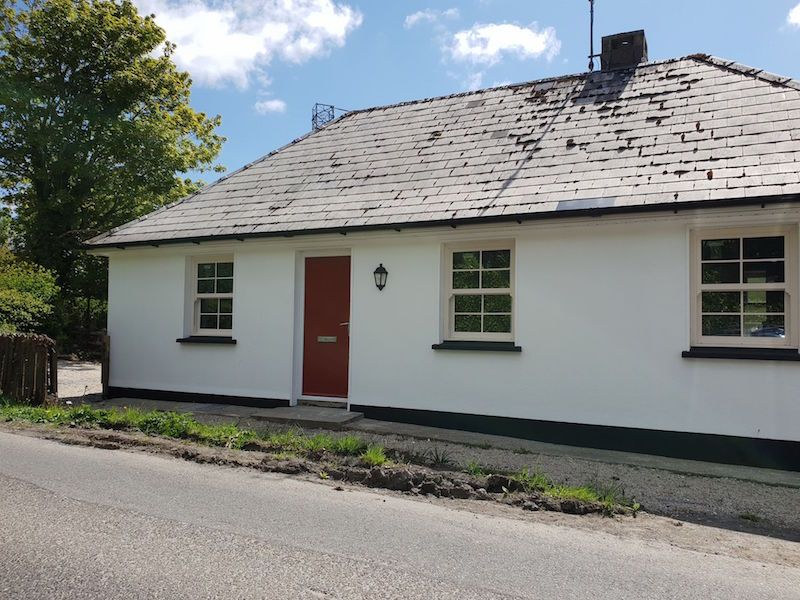 Appeal after windows removed from historic Donegal cottage during renovation

A woman who is restoring a historic cottage in Letterkenny has appealed for the building’s windows to be returned after they were taken during the renovation.

Catriona Woods has spent the past year painstakingly restoring Kiltoy Gate Lodge to its former glory.

The cottage, on the site of the old Unifi factory, dates back to 1810 but has undergone a complete renovation during this time.

The cottage is described in the National Inventory of Architectural Heritage as a quaint thatched cottage of 1837 and noted to be one of Donegals remaining gate lodges by An Taisce, the National Trust for Ireland.

Catriona has been left heartbroken however, when the original mahogany framed windows were taken from the side of the house.

After months of agonising, she decided to replace the windows but wanted to put them on a different part of the site.

Catriona revealed “I’ve been restoring the cottage, officially known as Kiltoy Gate Lodge, for just over a year and doing as much of the work as possible ourselves with the help of a few good local workmen.

“Restoring the cottage has been a bigger job than first expected but its slowly and surely nearing completion. The windows were a particularly difficult decision. The original small single paned glass windows in mahogany frames with original hinges and latches added so much character to the cottage but several window specialists advised to replace them.

Some of the original sash windows which were taken from the side of Kiltoy Gate Lodge.

“It wasn’t an easy decision and after literally six months of considerations, the windows were reluctantly replaced with triple glazed sash windows. We planned to construct a shed or glasshouse beside the cottage using the original windows so that they remained a complimentary feature of the cottage and also carried with it the story of yesteryears.

“The windows were left to one side of the house ensuring they did not get damaged and unfortunately, they went missing last week.”

Catriona said someone may have thought they were being dumped and helped themselves to them.

She added “I am appealing to them to return the windows as they are very much wanted. They can contact me directly, or just leave them back where they found them. The road is commonly used by walkers and runners and someone may have noticed these being taken, maybe they can recall some information, please get in touch.”

The house itself was originally constructed around 1810 by the Boyd family, an influential family of Letterkenny and also linked to estates at Ballymacool woods.

The cottage was first constructed for Rev William Boyle who was the Reverand at the local Church of Ireland church and subsequently lived in by scholarly inspectors.

In more recent years, from the 1900s, the cottage was owned by Letterkenny’s renowned Thomasina Kelly and her husband Billy and two children. Thomasina is remembered for her activation of Letterkenny Tidy Towns and some twenty five years involvement in the National Trust for Ireland.

While owned by them, it underwent its fist alterations, but thatch roof and three bay windows remained. Later owned by Unifi, it unfortunately underwent significant alterations, almost a rebuild and many of its original features were lost.

Catriona said that recent months have been testing on the restoration but she is determined to bring back the cottage to what it once was and preserve it into the future.

She adds “The Covid lockdown has slowed progress but it is hoped restorations will be complete in coming weeks and we will return this cottage to a habital cosy cottage, retaining its title as ‘Kiltoy Gate Lodge’.

“Any information of the windows would be greatly appreciated and I am appealing to the good nature of this person to hopefully return these to where they found them.

“Also, I would love to hear from anyone who has original photos of the cottage and any history or family connection to it. It would be great to add some more history to this lovely little cottage.”

Anybody who may have mistakenly taken these windows thinking they were being thrown out can leave them back or contact Donegal Daily on info@donegaldaily.com and we will arrange to have them collected.