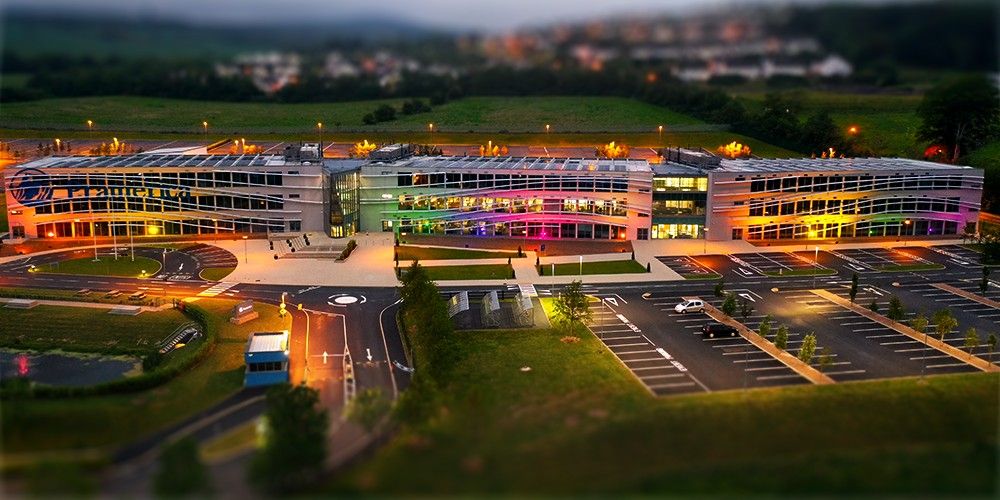 All systems go as Pramerica embrace new ways of working

Pramerica, the largest employer in Donegal, has found remote working to be a ‘game-changer’ as employees adapted to overcome Covid-19 challenges by working from home.

The multinational saw just 1 to 2 per cent of their employees working at their Letterkenny campus during the Covid-19 lockdown.

With more than 1,650 employees in all working for Pramerica, that meant many hundreds of their staff worked from home these last months, most of them across Donegal.

“The broadband is remarkable here,” Shane Grant, director of facilities for Pramerica, said.

The campus was made available for up to 500 people on short notice if there were a connectivity problem, but Shane said the numbers of people who used the campus remained fairly steady at 1 to 2 per cent.

In addition, Pramerica only paused recruitment for two weeks during the lockdown, then began to hire staff remotely, sending applicants online applications that provided a remote experience of the work, and meeting with them through the company’s own video platform.

The company closed their small satellite premises in Buncrana, Donegal town and Gaoth Dobhair for the lockdown because of the difficulty in managing social distancing there.

The Pramerica Campus in Letterkenny

Overall, Shane said, only about a dozen Pramerica staff could not manage working at home due to connectivity issues.

“Donegal is well up on our game in the broadband,” he said.

Pramerica had been monitoring the Covid-19 situation and anticipated a lockdown was coming. About 10 days before the government called on people to work from home where possible, they tested their business continuity – their ability to have people work from home – with about a quarter of their staff.

“Every company tests their business continuity regularly, but we had never tested it to such a scale,” he said. “We were lucky – that gave us a head start.”

He sees the new way of working as a massive game-changer. Staff developed more autonomy in the lockdown, adapting their hours to get their work done while managing home and family responsibilities. For example, because Pramerica’s parent company, Prudential, is headquartered in Newark, New Jersey, that meant local employees could start work earlier in the morning, before their own family demands on broadband increased in the midday hours.

“The staff used their own initiatives in dealing with that,” Shane said.

He has a weekly online call with about 50 managers, “and from day dot there hasn’t been an issue.”

“That’s down to the employees themselves,” he said.

The success of video meetings also means that Donegal employees will not have to travel to Newark as often as they had in the past for meetings.

He said Pramerica will follow government protocols in terms of returning to the Letterkenny campus, and will also reduce campus capacity by two-thirds before then. That means nearly 1,500 desks on the campus will be reduced to about 500, to allow for social distancing.

And that means more people will work from home more regularly, with staff sharing desks for those days they are in the office and daily deep cleans of the campus. He said they expect about half the staff to remain full-time remote workers, though anyone not in an at-risk category will be asked to come in once a month to touch base with colleagues.

A survey Pramerica took of its employees recently indicated staff would support the new arrangement: Out of about 1,400 respondents, only 92 people said they wanted to return to the office full time.

“It’s not the end of big campuses, but you have to change the way you operate,” Shane said. “Why can’t you work from home three days a week, and come in for collaboration and the social aspects of it? Then we’ve got the best of both worlds.”

It’s about using the space more wisely while cutting down on internal movement and giving people more agile working environments, he said.

And the move to remote working can also be good news for rural areas like Donegal, he said, particularly given the housing and transportation costs in big cities, and other benefits of rural living that the pandemic identified.

“A lot of companies are looking in this direction again,” he said.

For more on working from Donegal email economicdevelopment@donegalcoco.ie or call 074 91 72363.