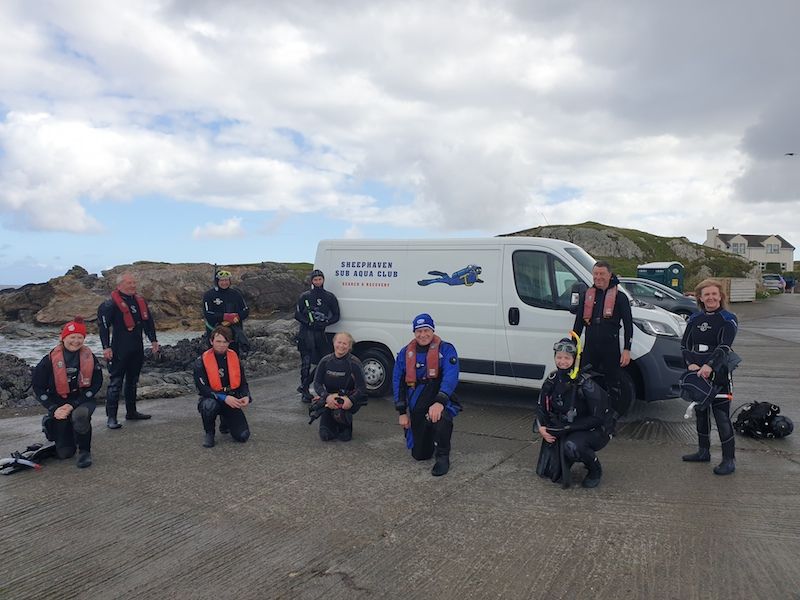 SHEEPHAVEN divers enjoyed a tremendous trainee dive on Sunday morning when the recent southerly winds had created sea conditions that had allowed the water visibility to clear to over 15 metres horizontally.

The divers had left from Portnablagh in Dive Boat Deirdre under the helm of Anne Boyle, who had given up her dive to provide dry coxswain duties and brought the divers around Breaghy Head to Pat McGee’s, where they conducted their dive in one stick.

Pat McGee’s is one of the divers favourite trainee dive sites, as it is has a combination of shelter in the shallows and a lovely reef further out to sea that falls off to a depth of over 20 metres.

The clear water allowed the divers to observe a wide variety of marine animals, which included various starfish, anemones and sponges species, while the shellfish were represented by some marvellous lobsters and brown crabs.

Any of these observations would have been worth a dive in their own right but seeing an additional two species was marvellous – first the divers met a super example of a monkfish camouflaged in the rocks and then nearby a butterfish resting out in the open on the seabed.

The monkfish was bigger than usually observed at well over half a metre in length and in the clear water all the features of its colouring and the spiny edges on its pectoral fins were easy to make out.

With the scientific Genus name of Lophius there are a number of species, including what appeared in this case to be Luphius americanus which ordinarily grow to a length of 1.5 metres, they are flattened in structure, which allows them to hide on the sea floor.

These fish are lunge predators and need to be treated with the greatest of caution, so the divers kept well out of its attack range, just in case of any nasty surprises.

The butterfish was very docile and wasn’t concerned about the divers at all and again because of clear conditions its outstanding features, which include a series of spots along its dorsal fins, were easily observed.

Surface to surface times of nearly 40 minutes were conducted in cosy waste temperatures of 14 degrees Celsius.

After completing the dives everyone was recovered onto the dive boat and returned to Portnablagh, just as the forecasted wind began to pick up.

There they joined the snorkelers who had completed their morning’s activities in the vicinity of the Golf Course, where they had enjoyed perfect visibility of the seabed though-out their snorkel, which is a fitting tribute to what a Irish scuba diving has to offer to those who would in the past ventured to foreign parts.

Now that international travel restrictions might limit people’s ability to experience an activity based holiday, they could look at an Irish challenge instead and in particular consider recreational diving with Sheephaven SAC in the pristine waters off the Donegal coastline.

Finally a special word of thanks goes to Louise Rowland and to Timmy Boyle of Atlantic Composites, who respectively designed and sponsored the new livery on the Sheephaven SAC van – it is very effective indeed and will without doubt serve the club well in promoting our presence into the future.