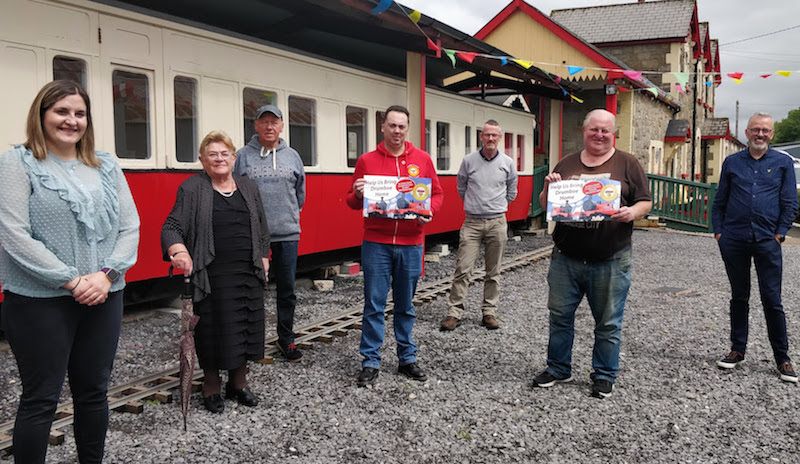 Famous steam engine on track for return to Donegal!

One of Donegal’s most famous steam engines is on track for a return to its rightful home.

The Donegal Railway Heritage Centre has announced the pending return of Donegal’s most famous steam engine, Drumboe to Donegal Town.

Early in 2019 a campaign was launched to raise the funding to take the steam engine back.

Now having received donations from across the island of Ireland and further afield, including from Graham Forbes (grandson of CDR Manager Henry Forbes), The North West of Ireland Railway Society and many others, that dream is a reality.

It would not have been possible without Donegal Local Development CLG who came in with the main part of the €100k project with a grant of €65k, leaving now only a small amount remaining to raise.

Mark McDaid, Chair of Donegal Railway Heritage Centre said they are delighted to secure the funding for the bulk of this project to deliver this milestone heritage and tourism project for Donegal.

He said “As well as returning Drumboe to presentation state, and transporting her back to Donegal Town, the funding will also be spent on restructuring the site at the front, building a new platform, building a canopy over the engine and other stock, lighting her as well as work to the front of the station.

“We would like to thank Donegal Local Development CLG and all of our benefactors who have made this ambitious, but much needed project, possible.

“Drumboe will become the centrepiece of Donegal’s railway museum in Donegal Town, making it a landmark tourism project drawing locals and visitors alike to the region, thus making it more sustainable.

“More importantly however, it will have a positive impact on the local community and County, in the economic regeneration of the region, our heritage and in increased pride.”

He added “The project can be of great benefit to the community of Donegal and tourists alike, helping to bring the Donegal Railway back to life through the return of this famous Donegal steam engine to Donegal Town.”

Niall McCaughan, Manager at Donegal Railway Heritage centre described the return of the engine as a “game-changer.”

“We have recognised for some time that in order to properly celebrate our unique Donegal Railway Heritage, the largest narrow-gauge network in the British Isles, the one thing that was missing was an original Donegal Steam Engine.

“Having Drumboe back on site will be a game-changer, not only for the museum but for Donegal Town and the County. However, our ambitions don’t stop there. We are still looking at a bigger plan in the medium-long term to open up a bit of track and once again have train stock running in this part of Donegal.”

The landmark project will take up to 12 months to complete. The museum will continue to operate during this time.

If members of the public wish to contribute towards the remaining small shortfall to cover some additional work on the project, they can do so by simply clicking the button below or through the website at http://donegalrailway.com/donate/ or by contacting the museum directly.