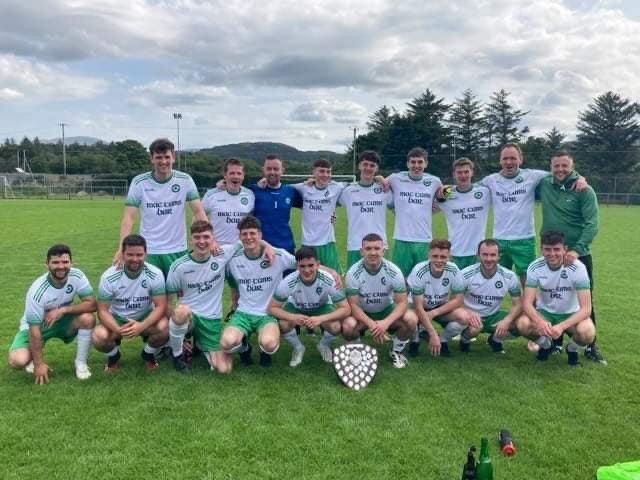 Clonmany Shamrocks sealed the league title and an immediate return to premier division football next season with  a big victory over Aileach Res at Shamrock Park.

Clonmany took the lead in the 8th minute when Shane McCaul’s pass from wide on the right slipped Mark McLaughlin in behind the Aileach defence and he shot low to the net giving Dylan Clarke no chance.

They doubled the lead in the 10th minute when Mark McLaughlin drove into the box before squaring to Damien Duffy but Dylan Clarke pulled off a good blocking save and the ball broke kindly to Steve Harkin 12 yards out and he drove the ball to the roof of the net.Shane McCaul tried his luck in the 16th minute from the right hand side of the box but saw his dipping shot land on the roof of the net.

In the 21st Aileach’s Stephen Doherty had Patrick Harkin back-pedalling to cover his shot from half-way but it cleared the Clonmany crossbar. Clonmany scored their third in the 25th minute when Mark McLaughlin controlled Fearghal Harkin’s pass on the edge of the box and turned inside ,past his marker before unleashing a rasping shot to the top right hand corner of the net giving Dylan no chance.Aileach had a good spell of possession after Clonmany’s third goal and Denim McLaughlin set up Stephen Doherty in the 39th minute but he shot wide of Patrick Harkin’s goals.

Aileach pulled a goal back in the 42nd minute after Denim McLaughlin was barged in the box and he stepped up himself to shoot low to the bottom right hand corner with Patrick Harkin diving the wrong way.This seemed to spur Clonmany on and in the 44th minute Fearghal Harkin shot from the left hand edge of the Aileach box but saw Dylan Clarke save his shot but Mark McLaughlin was following up to gather the loose ball send a low shot past the prostrate keeper to complete his hat-trick.

Clonmany began the second half as they had ended the first and they made it 5-1 in the 56th minute when Alex McFadden and Shane McCaul combined on the right flank and Shane crossed for Dean Harkin , who broke across the Aileach box and shot low to the net ,beating Dylan at his left hand post.Clonmany made a raft of substitutions after this fifth goal and three of these subs combined in the 66th minute to make it 6-1.

First Adam McLaughlin crossed from the right of the box ,to Niall McLaughlin who made a darting run into the box before setting up Jason Devlin , who found the top left corner of the net.They made it 7-1 in the 68th minute when another sub, Matthew Brennan collected a pass wide on the left wing and his cross-come -shot drifted over Dylan Clarke at his near post and into the bottom left hand corner  of the net.Clonmany wrapped up the scoring in the 87th minute when Jason Devlin’s pass sent Adam McLaughlin away his shot from a tight angle beat Dyan Clarke at his near post and seal an immediate return to the premier division.

At the second time of asking Clonmany Celtic clinched the division 2A league title with a hard fought two nil win over Redcastle at Shamrock Park on Saturday evening .

In beautiful conditions the home side took the lead after ten minutes when Karol Harkin rounded the keeper and squeezed the ball home from a very tight angle.The visitors competed throughout and on 37 minutes a Terry McColgan header looked destined for the top corner but Kieran Friel made a brilliant save tipping the ball over the bar. In a tense second half defences dominated and the longer the game progressed the more nervous the home side seemed to get. Those nerves were quenched when Niall McDaid  turned back the clock with a brilliant goal.

Receiving the ball with his back to goal he turned well beating a defender before rounding the keeper and slotting home to spark jubilant scenes among supporters and players alike.

Culdaff got a great start   to this game played in ideal conditions at Caratra Park when Jack McLaughlin converted a penalty in the 8th minute after Niall Gordon had been  upended.

But the visitors got back into the game on the half hour when Gerard  Gill controlled well twenty yards out turned and despatched a crisp low effort to the bottom corner. The remainder of the half saw defences on top and neither keeper troubled. The home side regained the lead six minutes into the second period after a Mark Doherty cross was parried by Ronan Bonner and McLaughlin pounced to drill home.

Bonner made a good save to deny McLaughlin but was helpless to stop the Culdaff striker from completing his hat trick on 68minutes. Gordon split the visitors defence with a fine pass for Mclaughlin to race clear and drill low to the corner. It became four one on 75 minutes after McLaughlin pounced on a poor pass to advance and when his low effort was saved by the legs of Bonner the ball fell to Gordon to slot home.

Culdaff completed the scoring when a superb Liam Doherty pass found substitute Sean McGrenaghan on the right and he showed tremendous composure to cut inside and drill home.

Clonmany didn’t heed this warning when Diver broke again two minutes later and squared to Cian Burke who tapped home from six yards out to open the scoring.  Clonmany equalised in the 10th minute after Lee Coyle and David McGonigle set up Michael Devlin whose right foot shot beat Kyle Harkin at his near post.

Clonmany should have taken the lead in the 15th minute when Aaron Harkin set up Tiernan McDonald  but Kyle Harkin blocked at the edge of the box and it broke to Thomas Comiskey but he shot wide of the goals from the edge of the area. Clonmany  did take the lead in the 32nd minute when Michael Devlin received a throw in on the left side of the box and turned a defender before slotting low home across the goals and into the far corner.

Carn responded and home keeper Cillian McCarron made a good save from Dayton Cooke’s free kick on the edge of the box in the 35th minute to tip it over the crossbar. The visitors  equalised on 42 minutes when Dion Diver latched onto a breaking ball from a Clonmany  corner and broke upfield to draw Cillian McCarron from the goals and round him to slot home.

Clonmany almost scored just after the restart  when Thomas Comiskey curled a shot from the edge of the area which came back off the post with Kyle Harkin beaten. At the other end Cian Burke broke upfield and out paced the Clonmany defence to shoot into the side netting.

Carn took the lead in the 52nd minute when they stole a Clonmany kick out with Sean O’Donnell breaking forward to cross for Cian Burke to sweep home at the back post.Clonmany should have equalised in the 66th minute when Lee Coyle’s cross from the left was met by Thomas Comiskey at the back post but he connected with it too well and he shot over the bar.

As play swung from end to end Carn’s Dion Diver went close in the 75th minute when his shot from the left of the box grazed the crossbar. Clonmany also went close  in the 85th minute after  Tiernan McDonald broke into the Carn box but his lob over the advancing Kyle Harkin only found the roof of the net. The visitors sealed the win and kept their title ambitions on track   in the closing minutes with Cian Burke sealing his hat trick with a tidy finish past Cillian McCarron.