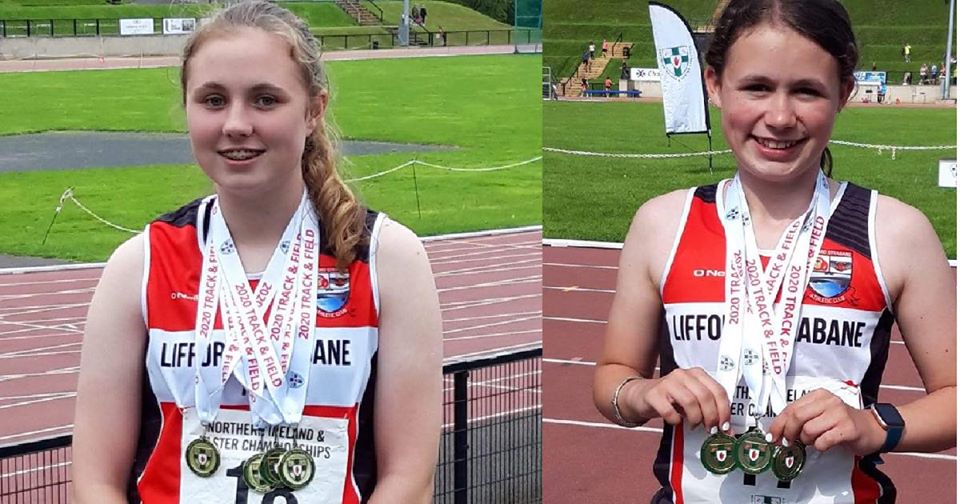 THERE was Donegal success last weekend at the Ulster Under-14-17 Track and Field Championship at the Mary Peter’s Track in Belfast.

Ulster was the only province to hold a championship this year and there were some memorable tales.

There were many other success stories, including that of Riona Doherty of Finn Valley AC, who claimed a treble haul of gold medals.

Lifford-Strabane AC left with 14 gold, 10 silver and eight bronze, including a whopping seven medals between the Gallen sisters.

Her sister Caoimhe Gallen won three gold in the under-14 hammer, shot and discus.

They are the daughters of former Donegal athletics star Sharon Foley, a regular competitor in the Irish vest.

Una O’Donnell claimed under-16 hammer and discus silver medals as well as a bronze in the shot.

Cranford AC star Oisin Kelly won gold in the under-17 800m and the long jump.

Oisin’s 6.13m winning long jump was a new personal best, while he led from gun to tape to claim the 800m crown.

Daire McDevitt left with a trio of medals: gold in the long jump and triple jump and bronze in the 250m hurdles.

Niamh Moohan won the under-17 300m hurdles and claimed a silver in the 100m hurdles.

Mark Galvin just missed a medal in the javelin, as did Patrick McDaid in the under-17 800m.

Parlour won the Under-16 girls 80m hurdles. In only her second time competing in the event, Parlour powered home in 12.47 seconds, shaving 0.5 seconds off her previous best.

In the 200m, Parlour was almost a full second ahead of her nearest rival as she left with a third gold medal in 26.18 seconds.