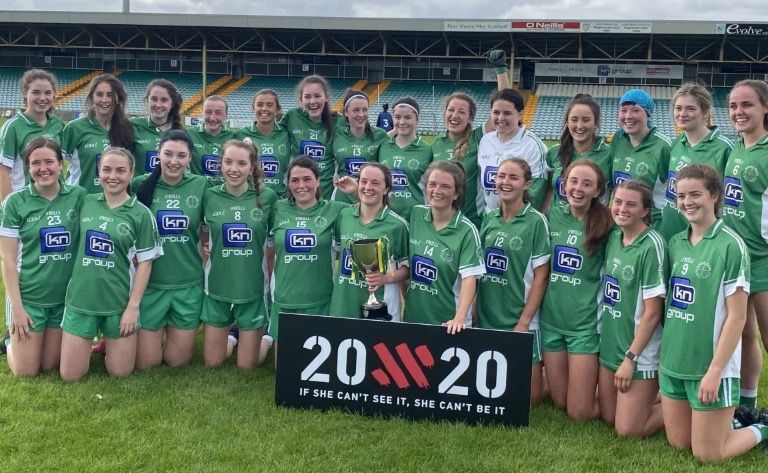 Glen Campbell’s team looked as though they were going to get involved in a shootout early on before tightening things at the back after the break, when they went 25 minutes without conceding. They also had 10 different scorers on the day.

The contest began at a ferocious pace and it was the St Naul’s side managed by Glen Campbell who made the early running.

By the eighth minute, they were 1-2 to 1-0 in front with Enya Gallagher finding the net for the Mountcharles-based outfit when she took on a pass from Annaleigh Breslin before planting past Aisling Nee in the St Eunan’s goal. That added to Layla Alvey and Breslin’s points beforehand.

The opening goal of the game came on seven minutes, a delightful lob by Anna Flanagan. The Letterkenny team began assert themselves and managed to produce a fine second goal on 14 minutes, which was finished by Shauna McFadden.

That made the score 2-2 to 1-4 for St Eunan’s and from then until the end of the half the goals might’ve stopped but both teams showed great capabilities in scoring points.

Niamh Walsh put over a couple of fine scores for St Eunan’s and for St Naul’s, Emer Shovlin, Niamh Boyle, Eilish Ward, Annaleigh Breslin and Amy Shovlin were all on the mark to level it up.

Claire Doherty of St Eunan’s had a goal chance right at the end of the half to give Alan O’Connell’s team an interval lead, only to see her shot saved by Rhiannon McNeely.

At the other end, St Naul’s did take their chance when it came as Breslin pointed right on the whistle for a 1-9 to 2-5 lead.

St Eunan’s opened the second half scoring through Walsh, her third of the afternoon, while Niamh Byrne had a good effort on goal for St Naul’s but Lee was equal to the attempt.

Scores were becoming hard to come by but Emer Shovlin’s free and a second Aoife Greene edged St Naul’s two up, 1-11 to 2-6, by the second half water-break.

St Naul’s passed up on a great chance to move five in front when Caoilfhinn Deely’s penalty on 50 minutes was saved by Nee in the St Eunan’s goal and Ward’s pinged the rebound off the crossbar and the Cathedral Town team could breathe a sigh of relief.

Annaleigh Breslin also clipped the crossbar, with the ball going over it, with her fourth point of the game and a three-point lead with eight to play. Catherine Campbell pushed the advantage out to four and Niamh Brown to five.

St Eunan’s only managed three points in the second half, with two of those when they were chasing the game from Laoise Ryan. Enya Gallagher and Breslin, her fifth from play, sealed the win to the delight of St Naul’s.