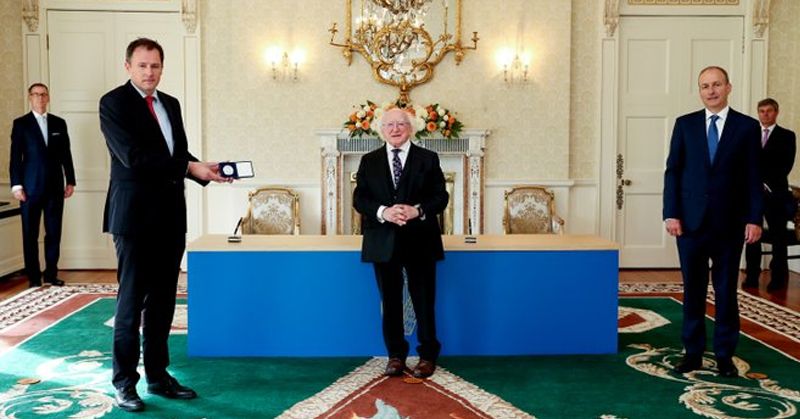 Charlie McConalogue has been officially appointed as the new Minister for Agriculture, Food and the Marine.

The Donegal TD received his seal of office from President Michael D Higgins this evening following nomination by Dáil Éireann.

The Fianna Fáil TD is the third person to take on the role since the coalition was formed in June. He succeeds Dara Calleary, who resigned last month over his attendance at the Oireachtas golf society dinner in Galway. The previous Agriculture Minister, Barry Cowen, was sacked in July following the controversy over a drink-driving ban he received four years ago.

Speaking today, the Taoiseach said McConalogue will “discharge his role with distinction”. McConalogue’s background lies in farming in Donegal and he has a keen interest in the sector as the former agriculture spokesperson for Fianna Fáil.

Taoiseach Michéal Martin said: “Deputy McConalogue’s knowledge of this area is both deep and broad, a proud native of both Donegal and the Inishowen Peninsula, he brings with him a perspective rooted in communities which have always been defined by their spirit and their determination to shape a more prosperous future.”

The key issues facing McConalogue’s department in the months ahead will be Brexit and the reform of the Common Agricultural Policy.

Wexford TD James Browne will succeed Deputy McConalogue as Minister of State for Law Reform at the Department of Justice.