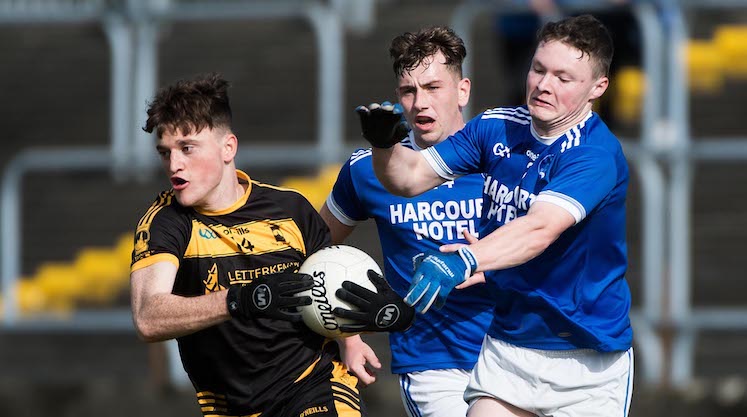 ST EUNAN’S completed the quartet for the Donegal SFC semi-finals when they breezed past Bundoran at O’Donnell Park – winning by 29 points having scored eight goals.

With Kilcar and Gaoth Dobhair getting frights against St Michael’s and MacCumhaill’s respectively, St Eunan’s certainly hit the ground running and by half-time were 12 points in front.

Then, three minutes into seven minutes injury time that certainly wasn’t welcomed by Bundoran, goalkeeper Ashley Mulhern was black-carded for hauling down Brian McIntyre in the square.

Johnny Boyle, the Bundoran full-back, had to go in goal as Niall O’Donnell nonchalantly down the middle. Substitute O’Donnell added an eight goal in the sixth minute of injury time.

The goal came when a ball from Padraig McGettigan effort dropped and as Eoin McGeehin challenged goalkeeper Ashley Mulhern, it broke loose to Niall O’Donnell who prodded home on seven minutes.

Points in that spell came courtesy of Caolan Ward, O’Donnell and James Kelly and tight after the water-break Sean McGettigan drove right at the heart of the Bundoran defence to plant a second goal, adding to Padraig’s point beforehand.

Bundoran finally got off the mark in the 16th minute through Alan Russell. However, St Eunan’s remained comfortable and by two minutes before half-time were 2-5 to 0-2 ahead, with Gary Clancy and Paul Brennan scoring for the visitors.

A third St Eunan’s goal really knocked the stuffing out of Terry McCann’s team, with Padraig McGettigan slapping home on 29 minutes when Shane O’Donnell blazed through to provide the assist. It was 3-6 to 0-3 at the break.

Last year at the same venue, Bundoran had miraculously pulled back an eight-point deficit in the final 15 minutes to take then Ulster champions Gaoth Dobhair to extra-time before eventually bowing out 2-20 to 2-17. It looked like they’d need something similar today.

On the flipside of that, Bundoran has been beaten 8-13 to 3-12, also against Gaoth Dobhair in the last eight in 2018. That’s the feeling they’ll have today.

Brian McIntyre opened the second half scoring for St Eunan’s and Ward smashed home a fourth goal on 35 minutes for a 4-7 to 0-4 lead.

With McGowan sent off, Peter Devine was also black-carded for the original foul so it was 14 against 14 for a few minutes. Ward, moments later, strode through and shot for goal again, only to hit the base of the post before Spratt was dismissed for use of the foot.

Eoin McGeehingot himself a goal in the 55th minute when he was on hand to tuck home a rebound after goalkeeper Mulhern saved initially from Conor O’Donnell.

The flame-haired substitute was unlucky on that occasion but two minutes later, goaled himself when he smashed the ball through Mulhren’s legs. Niall O’Donnell’s penalty and O’Donnell’s second goal completed the route.