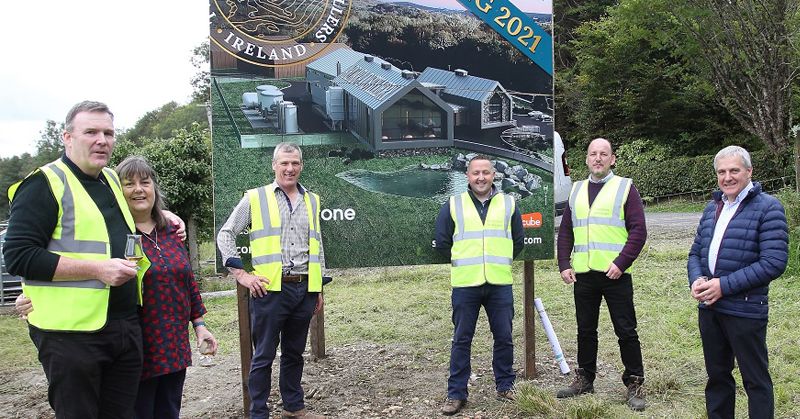 The first sod of the new Sliabh Liag Distillery in Ardara has been turned, paving the way towards a new distillery and visitor attraction for Donegal in 2021.

Members of The Ardara Town Traders’ Association gathered in the Showfield this week with the founders of Sliabh Liag Distillery to turn the sod on the site.

The turning of the sod culminates in a busy period for the Donegal distillery, which over the last two weeks has raised €1.5 million via crowdfunding to fuel the next phase of its expansion.

James and Moira Doherty, the founders of Sliabh Liag Distillers, alongside the construction team who gathered in the Showfield this week to turn the sod on the site of the new Ardara distillery, which will open in 2021.

James Doherty, who founded the distillery with his wife Moira, said plans for construction are full steam ahead following the huge response to the investment raise: “We’ve been a little overwhelmed by the response to our crowdfund with over 800 new investors becoming part of the Sliabh Liag Distillers’ family in the past two weeks. Our funding took yet another giant leap forward this week with the announcement that three of our existing shareholders have committed an additional quarter of a million euros to the business; seeing existing investors of such industry standing confidently expand their stake in our company is a fantastic endorsement of what we are aiming to achieve by reclaiming Donegal’s distilling heritage.”

Moira Doherty, co-founder, went on to say: “It feels like this day has been a long time coming and we wouldn’t have got here without the support of our architects, Gavin and Michael of Corner Stone Associates, Hugh Gavigan for the land and the enthusiastic welcome of the Ardara community. So, we say a big thank you to all our supporters near and far for helping us get to this momentous point.”

Demand for the distillery’s brands is gathering international momentum, says James: “Over the past week, we’ve taken a raft of new orders from existing customers for products across our range. Russia, Finland and Germany have submitted orders with Italy and Australia expected this week – Dark Silkie and An Dúlamán are proving particularly popular and make up 90% of the volumes ordered. Production at our Carrick Distillery has stepped up another gear and the bottling line is busier than ever.”

Pictured (front) are James and Moira Doherty, the founders of Sliabh Liag Distillers, alongside James’ mother Rose Doherty, who lives in Meenacannon, Kilcar alongside the construction team who gathered in the Showfield this week to turn the sod on the site of the new Ardara distillery, which will open in 2021.

Stephen McCahill, Chairperson of the Ardara Town Traders’ Association, said the community in Ardara is delighted that Sliabh Liag Distillers has begun construction of its new distillery.

“This is an exciting day for the town and we look forward to supporting founders, James and Moira Doherty, as they seek to reclaim the distilling heritage of Donegal and make the Sliabh Liag peninsula to Irish whiskey what Islay is to Scotch,” Stephen said.

“James tells me his grandfathers were poitín men, so it’s in his DNA, but his and Moira’s passion for sharing Donegal’s distilling heritage with the rest of the world has driven this project forward time and again! Sliabh Liag Distillers’ new state of the art facility will offer an industry-leading visitor experience to sit alongside all that Ardara town has to offer on Donegal’s Wild Atlantic Way, placing Ardara at the centre of Donegal and Ireland’s growing and vibrant whiskey tourism scene.”

Gavin Shovelin one of the designers said: “This is an iconic project for Donegal and to be able to design these buildings for my hometown is really special. We have designed the still house to be modern, practical and sympathetic to the area reflecting the vision Moira and James had and I am looking forward to the benefits that this project will bring to our local community.”

In August, Sliabh Liag Distillers reclaimed Donegal’s whiskey heritage with the first legal distillation of whiskey in nearly 200 years. The company also bridged the Atlantic and 200 years of history with the arrival of its spirts in the United States last month, marking the first time in almost 200 years that a batch of spirits from Donegal was dispatched to the United States.