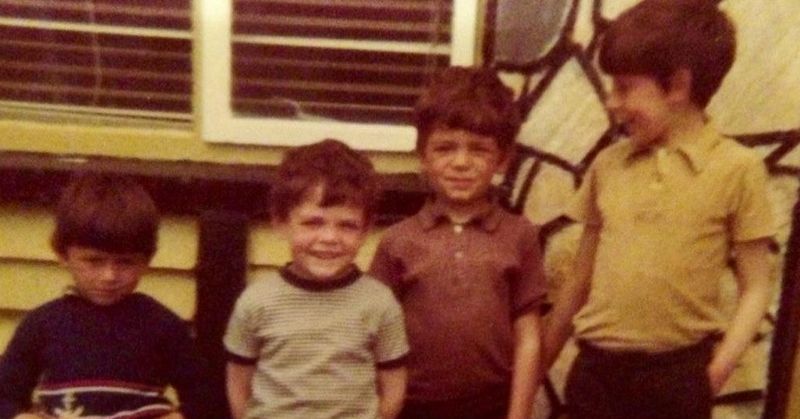 This week, columnist Brian McDaid takes a trip down memory lane to a place in Glencar Letterkenny where rich childhood memories still bloom.

I recently found the gate into a field that no longer exists. It happened when I went back to using an Apple phone after two years of working with an Android. Maybe it was me, maybe it was age or maybe it was a shift in systems and maybe it was there all the time on the android phone but I couldn’t see it. I assumed that the access had become no longer available to look at old maps from years ago.

My father taught me how to read maps, he worked with them with the ESB in the 50’s and 60’s when they rolled out the rural electrification drive. 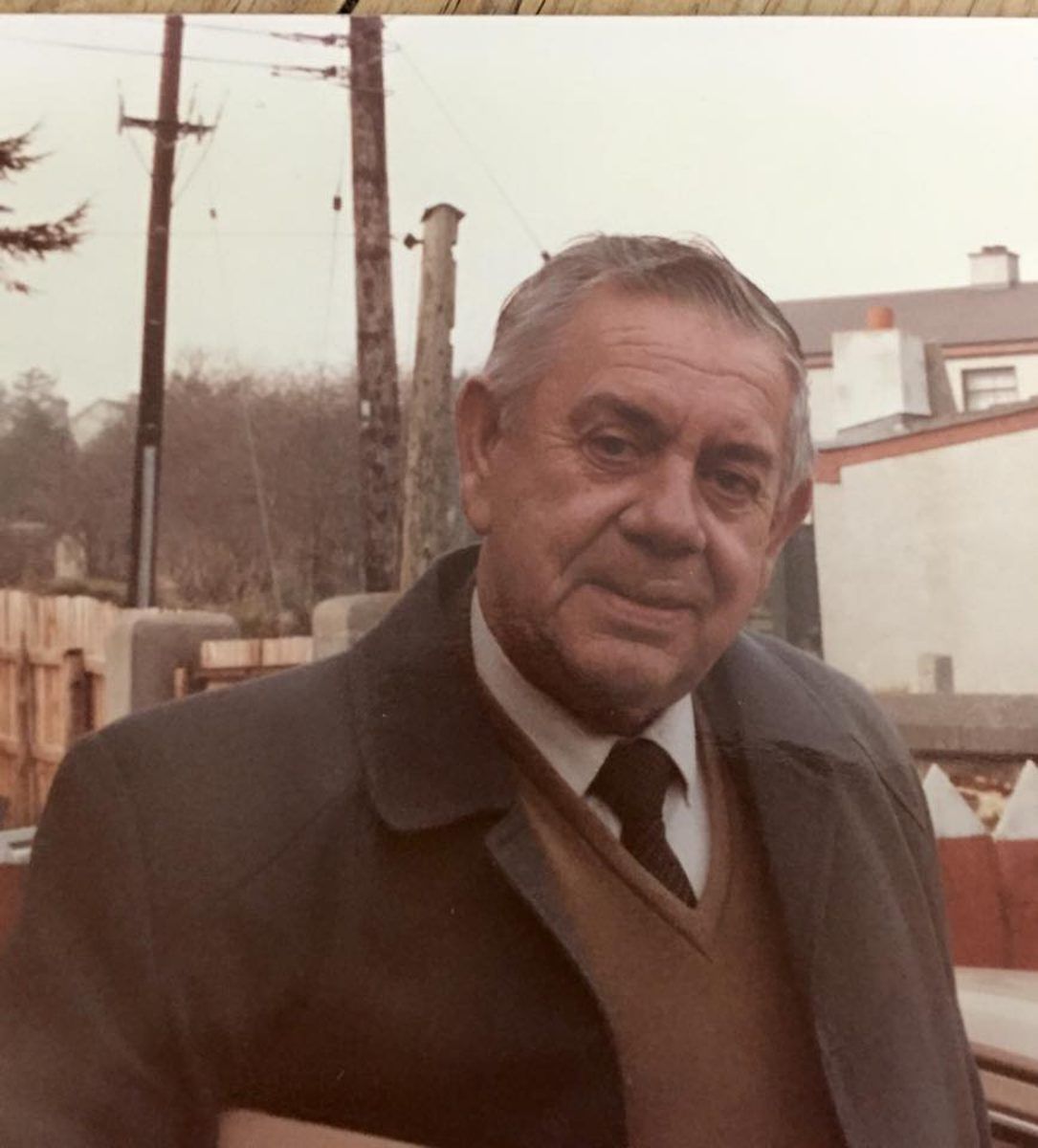 My father, Fred Mc Daid pictured at the back of Wolfe Tone Place who enjoyed a sing-song with hits like Shamrock Shore. Photo Brian McDaid.

Years on and through the technology of OnLine Ordnance Survey Ireland (OSI) and the Apple phone, which I’m a bit better at getting my way round, I was able to discover old historic maps for Ireland once again going as far back as 1837 again, all the old ditches, fields roads streams were there once again. 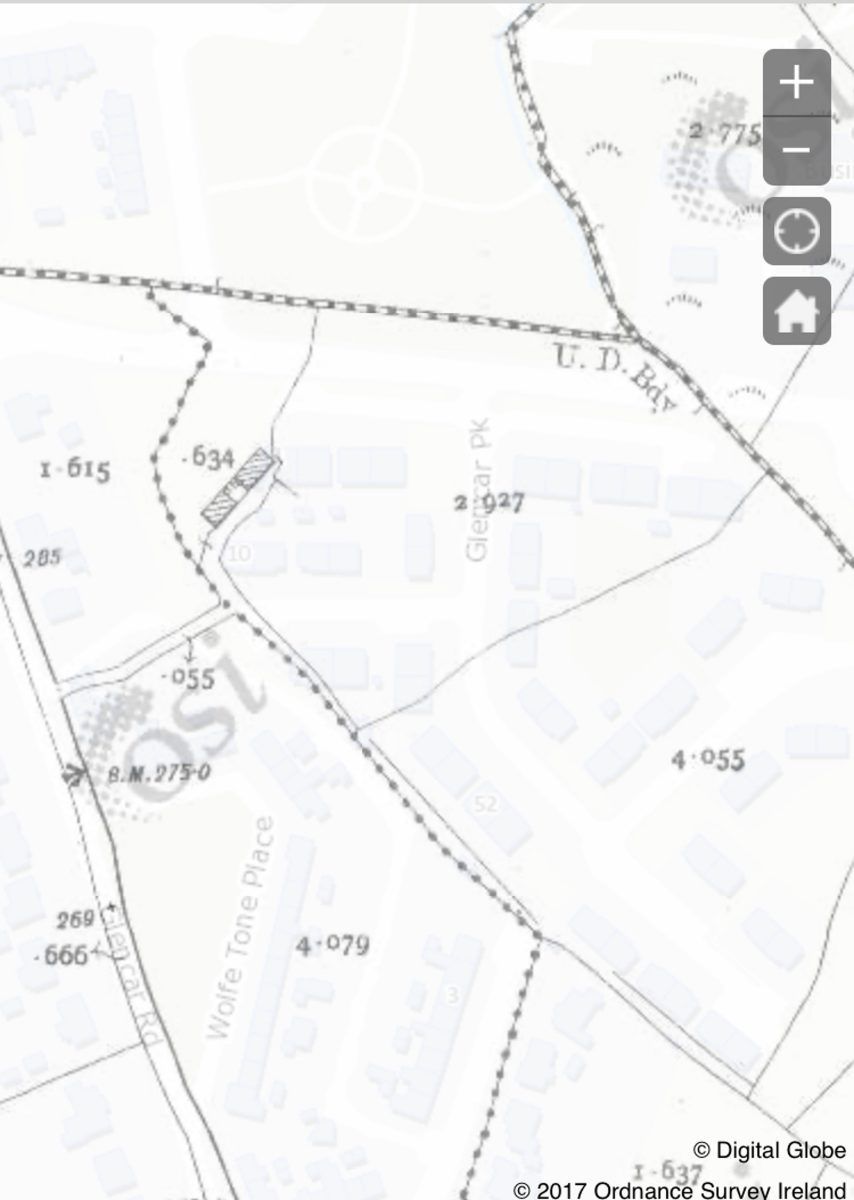 A map from over 150 years ago showing where fields once were that made the sites for Wolfe Tone Place and in Later years Glencar Park. And where the map is marked with Urban District Boundary (U.D. bdy) is the location of our Shamrock Shore. Photo Brian McDaid.

Gateway to the past.

And there it was, on the old black and white map, that old gateway into one of the fields at the back of our house in Wolfe Tone Place. Willie Crawford owned two fields directly behind our council estate, 34 houses built on 4 Acres of land in front of it, not even 4 acres if you were to take the area of the two greens of ‘up the fronts’ and ‘down the backs ‘ as they were known. Before our homes were built there, the map says it was an old quarry. 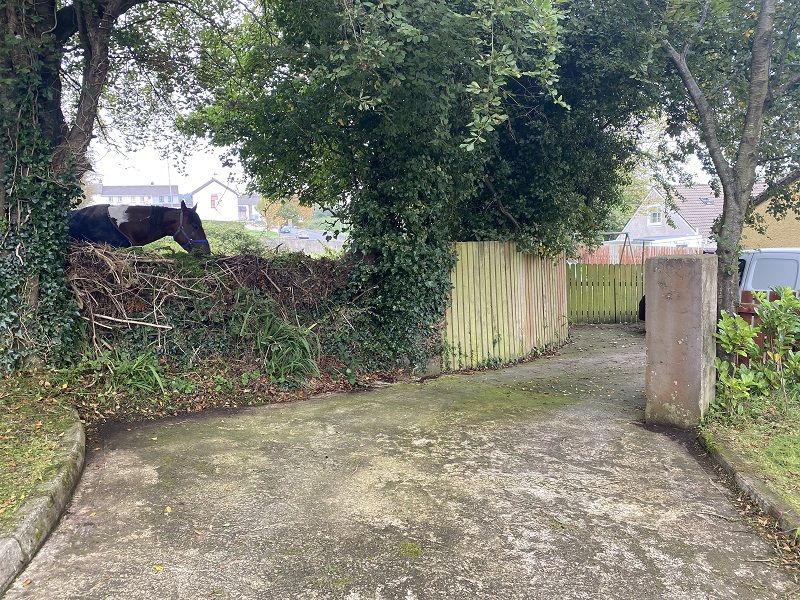 The old gateway into Crawford’s fields which now is a side entrance to a home in Glencar. Photo Brian McDaid. 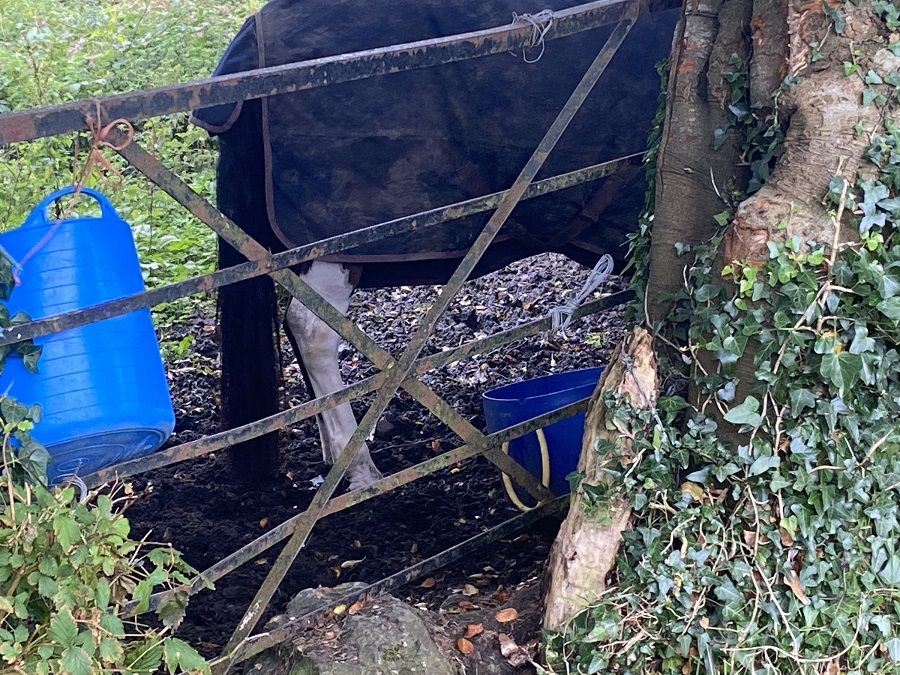 Possiblly whats left of Crawford’s old gate now used to block at gap in the hedge along the ditch in Crawford filed. Photo Brian McDaid.

Crawford’s bottom field was 4 acres and the top 3, that was 7 acres of adventure, of escape, of freedom, on days when you needed to get out of the routine that sometimes were difficult.

Looking at the 5 sided shape of the upper field on the map on my phone every so often in the last few weeks I find myself back walking through that old gate through the Benweeds and careful not to step in cow dung, I’m back in the 70’s and these fields seem massive. 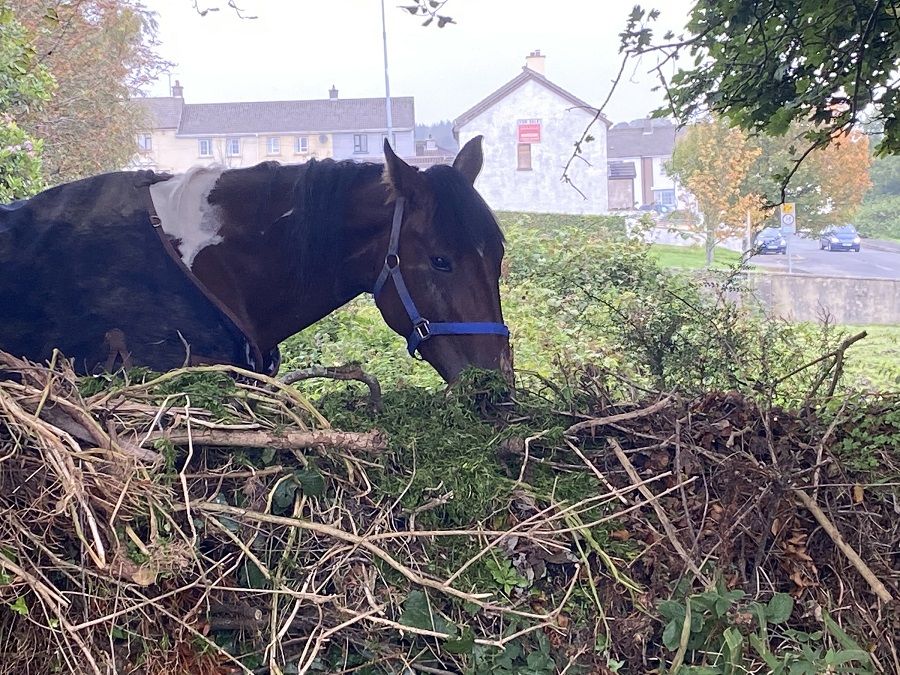 Bobby the horse pictured along where the old ditch was of Crawford Field in Glnecar. Photo Brian McDaid.

My father was nearly happier that we played in the back fields rather than the green at the front of our home, he was from the country, Pluck, near Manorcunningham where Willie Crawford was also from, who owned the fields before he moved into the town.

At the bottom of the top field there was a wee tree-covered triangle where two streams merged and headed on downhill. It didn’t seem to be in Crawford’s fields or Kelly’s fields or Mc Dermott’s fields, all of which were in the town lands of Sallygraine, Glencar and Ballyboe respectively.

In under the trees was a connection for the three townlands, along what then was the Letterkenny town boundary with streams surrounding it. It was a place covered in a carpet of big clover leaves which we as children let on were shamrocks, hence the name Shamrock Shore that we christened this hideaway we had found. It was our wee island on summer days all to ourselves. We were the Glencar version of the Famous Five, four brothers and a dog called Lassie that would follow us down the fields. 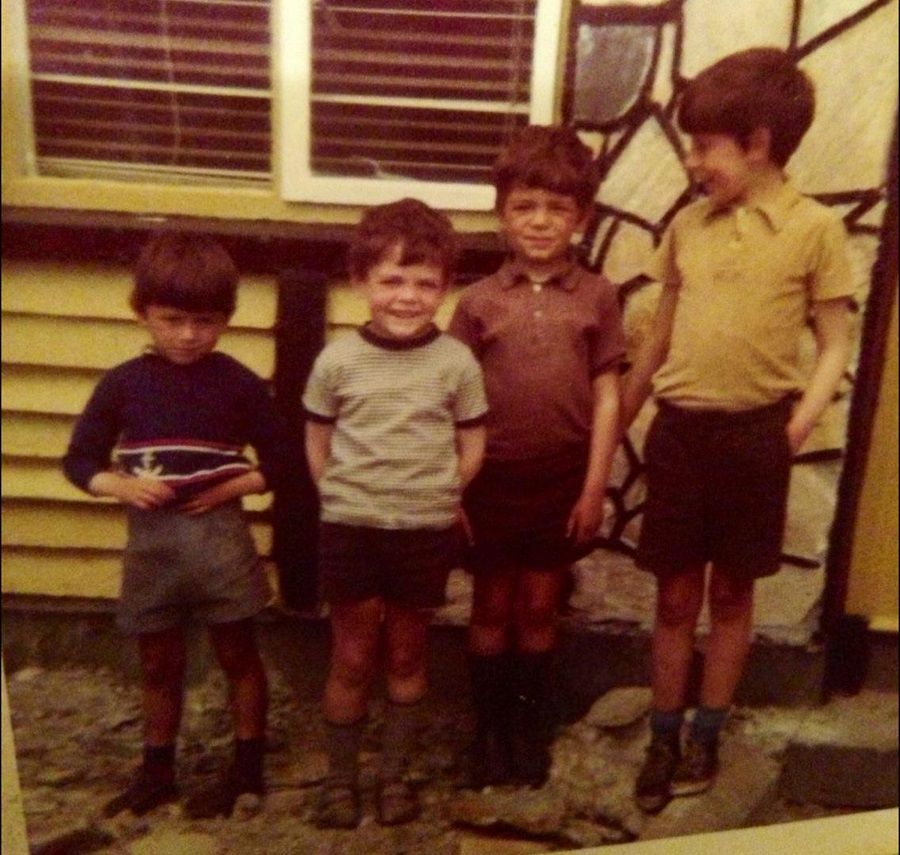 The famous five (minus the dog) who made many’s an adventure to Shamrock Shore in Glencar on the long summer days.

You could spend hours, or what seemed like hours to us as wains in that hide out. A place away from the chores, like dishes to be washed or beds that had to be made in a house minus one of your parents. Shamrock Shore or Paddy’s Green Shamrock Shore, to give it its full title, was one of the songs that my father would sing into an old cassette tape recorder when he had a few drinks. A song we would belt out of us in the middle of the trees in our Shamrock Shore.

From Derry Quay we sailed away on the 23rd of May
We were boarded by a pleasant crew bound for Americay
Fresh water there we did take on, five thousand gallons or more
In case we’d run short going to New York far away from the Shamrock Shore

Our place felt like the words of the song and when we headed off on our adventure, not to America but just to the bottom of Crawford’s field. We seemed miles from home.

What we didn’t know was one of us would follow the words of the song to America, Nelius the second oldest who has lived for the last 35 years in Boston.

Crawford’s fields are long gone, the homes of Glencar Park are there now, and what of Shamrock Shore is under the sprawl of a bigger Letterkenny.

This week I have traced the same old spot in my childhood to where a set of traffic lights stand right in the middle of what once was our Shamrock Shore that’s along the Circular Rd near the Glencar Shopping Complex. The old streams which flowed around our hideaway are now underground but one of them can still be seen up in the green area in front of Dr. Mc Ginley Rd where a small foot bridge spans over it. 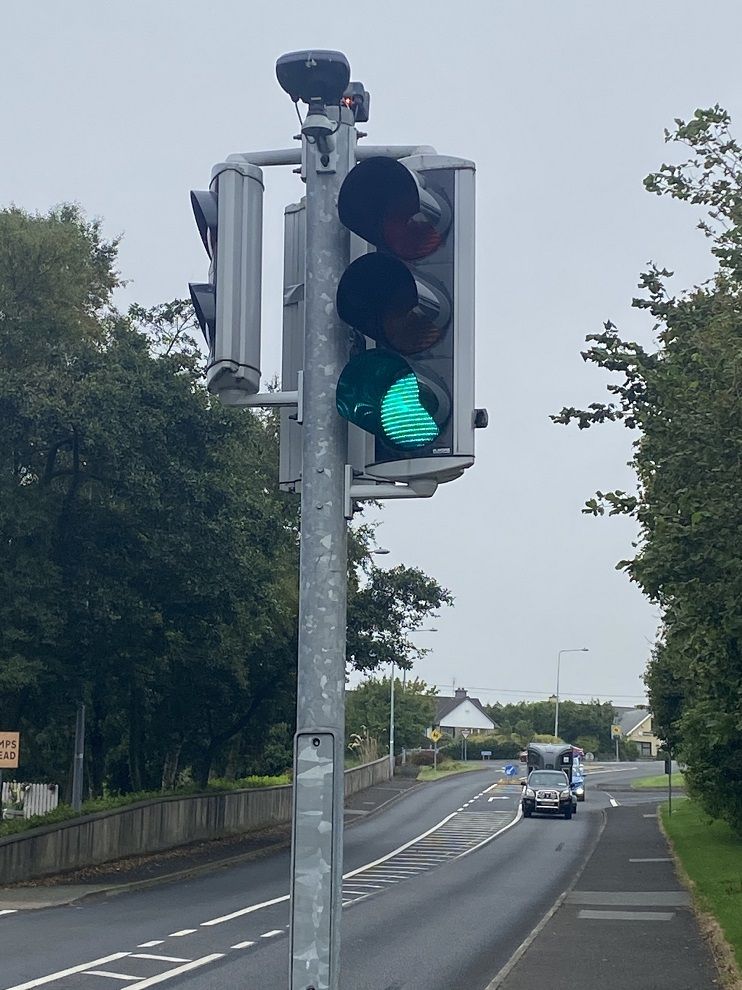 Traffic light now marks the spot where our shamrock shore was in the days of our childhood. Photo Brian McDaid. 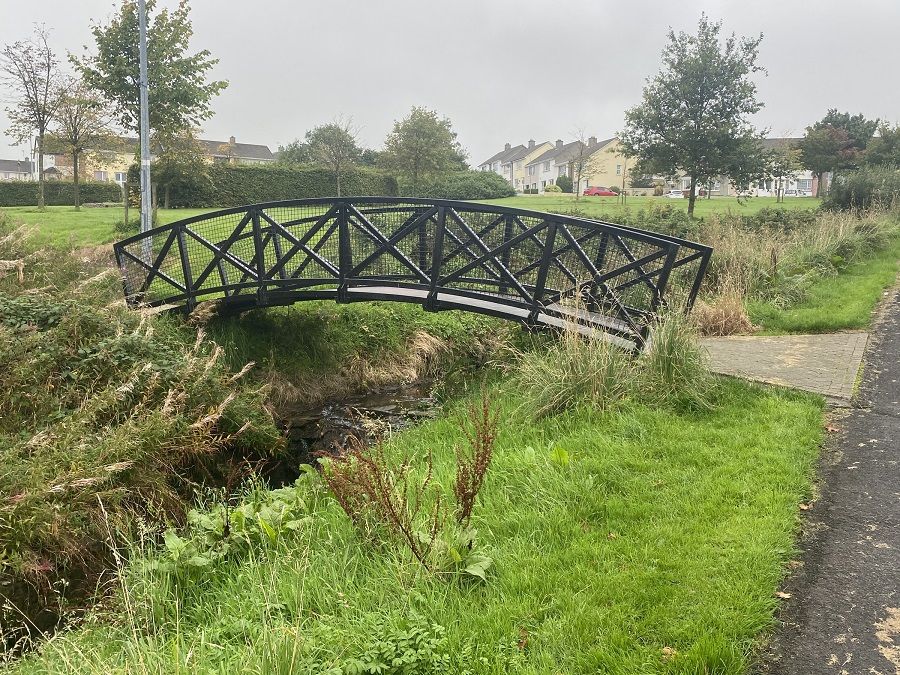 A beautiful foot bridge over one of the streams that once flowed past our Shamrock Shore near Dr. McGinley Rd. Photo Brian McDaid. 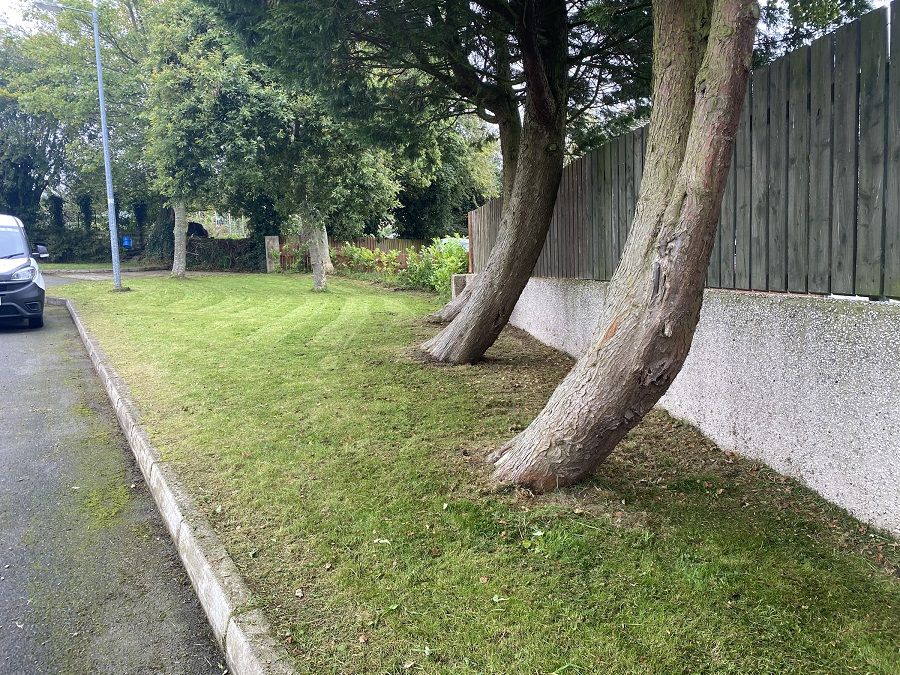 The backs of Wolfe Tone Place beautifully cared for by local residence and the Tidy Towns group. Photo Brian McDaid.

On an evening at the end of the summer, before the children made their way back to school, the traffic lights brought the traffic to a stop. Pedestrians had pressed the bottom but got a break in the traffic and nipped across before the lights turned red. They left the cars sitting at a red light. With no pedestrians crossing then, as if by magic, four children, three boys and a girl followed by a wee dog cross over what once was our Shamrock Shore to head on an adventure of their own.

Traffic light now marks the spot where our shamrock shore was in the days of our childhood. Photo Brian McDaid.