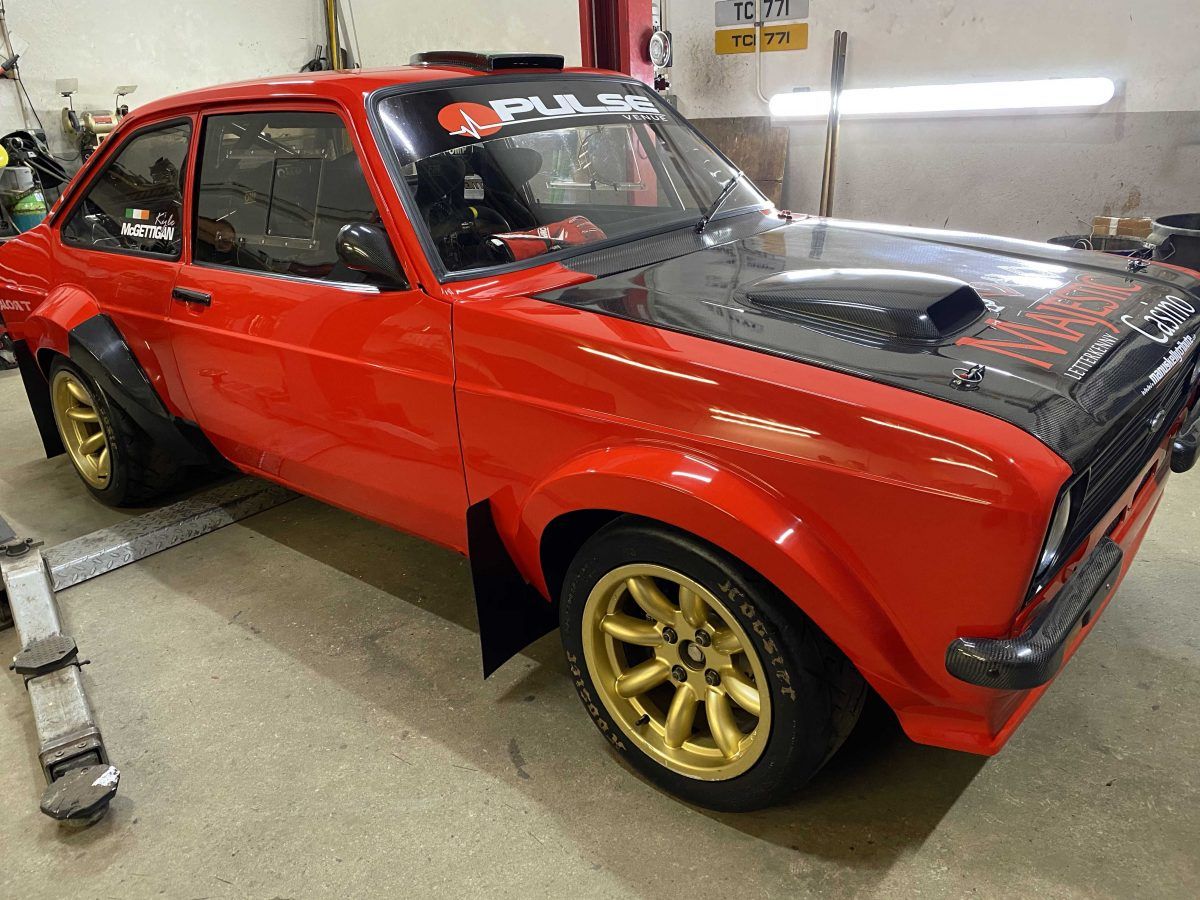 THERE is space for only three cars at Reid Motorsport workshop on the outskirts of Letterkenny.

There is a lift near the front door, a heavy work bench runs along the back garage wall. Everything is functional in this space; only a few old number plates tucked in behind a pipe running along the top of a wall would ever give you any idea of some of the history that is created with the cars that were built in this workshop.

With the present restrictions in place should have meant that it would have been a quiet year for a local rally team which Paul Reid runs – but that wasn’t the case.

This year, club men have taken advantage in the break in rallying to refurbish their rally cars.

At present the finishing touches are being put to the beautiful Mk2 Escort of Letterkenny’s Kyle McGettigan.

The red on this car is just breathtaking, an Audi S range colour beautifully finished with gold coloured rims. McGettigan’s Escort would have been more recognisable in white but recently the car underwent a very impressive colour change to red. 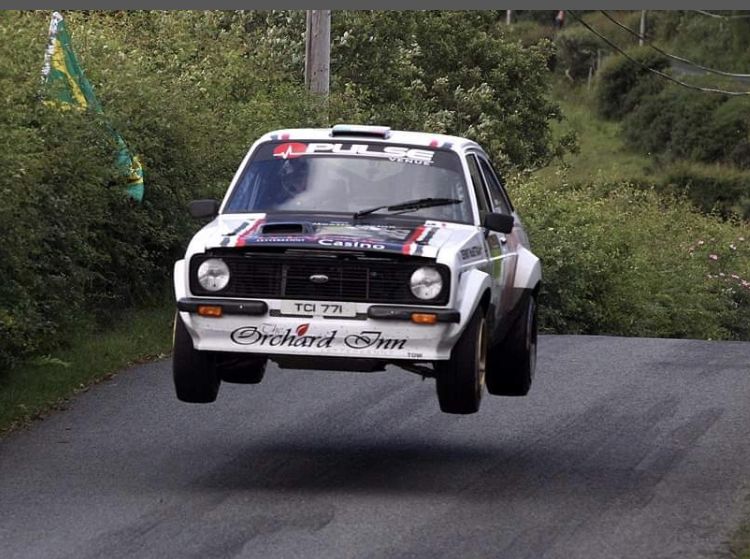 Letterkenny’s Kyle and Dale Mc Gettigan on full attack on the Gartan stage in their escort which is run by Reid Motorsport. Photo Brian McDaid.

Across from it, a Toyota Starlet is sitting over along the bench and, as with most cars that Reid Motorsport builds, is powered by local engine builder Kevin Gallagher (KGP).

Looking under the bonnet of this car the attention to detail that Paul Reid puts into the preparation of everything that he turns his hand to, be it a completion car to the restoration of a road car to the understated preparation of his present project, is evident.

There is always a project on the go in Paul’s workshop. A two-door Mk2 Ford Escort shell is just completed, a ground-up rebuild sitting on a few supports at the side of the garage. It will be on the move soon to be painted before it returns to complete the rebuild at the workshop. 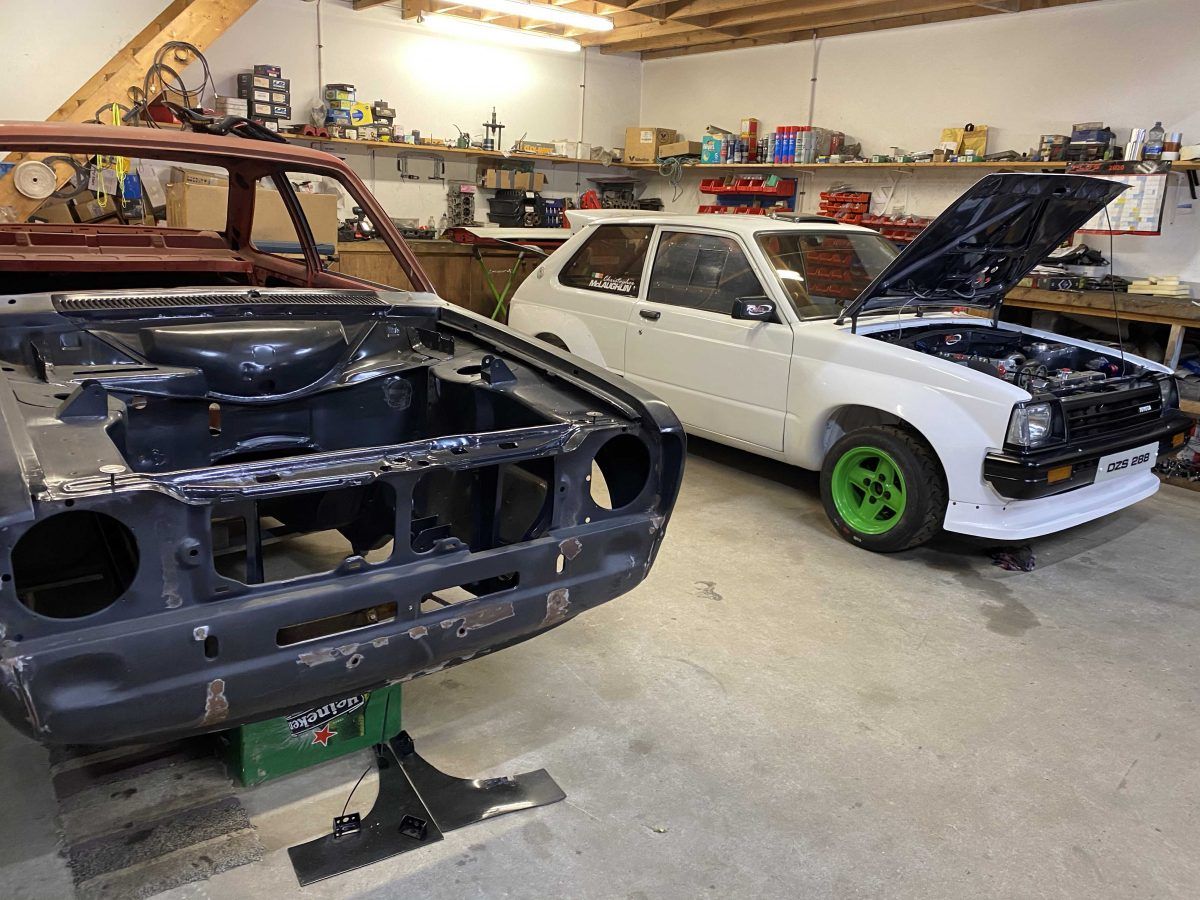 The different stages of development of building a rally or road car at Reid Motorsport. Photo Brian McDaid.

When the cars are finished it will look like a classic Mk 2 Escort or a ‘sleeper’ as Paul describes it, but underneath it the finish will have something very special under the bonnet.

This year has been very different for Reid Motorsport who ordinarily would be on the road nearly every second weekend servicing at one rally or another for the many different local rally crews that leave the servicing and the tuning of their rally car to this local rally team.

Paul started servicing rally cars for his brother Karl who navigated for Paul Gallagher in their Toyota Corolla and over the years.

Paul’s servicing of rally cars has expanded to include other local teams specialising in mostly rear wheel drives. This included winners like Declan Boyle and the late Manus Kelly all were serviced by Paul Reid in their days of rear wheel drive rally cars.

In a normal rallying season, Reid Motorsport could be running as many as 12 rally cars on the weekend of the Donegal International Rally. 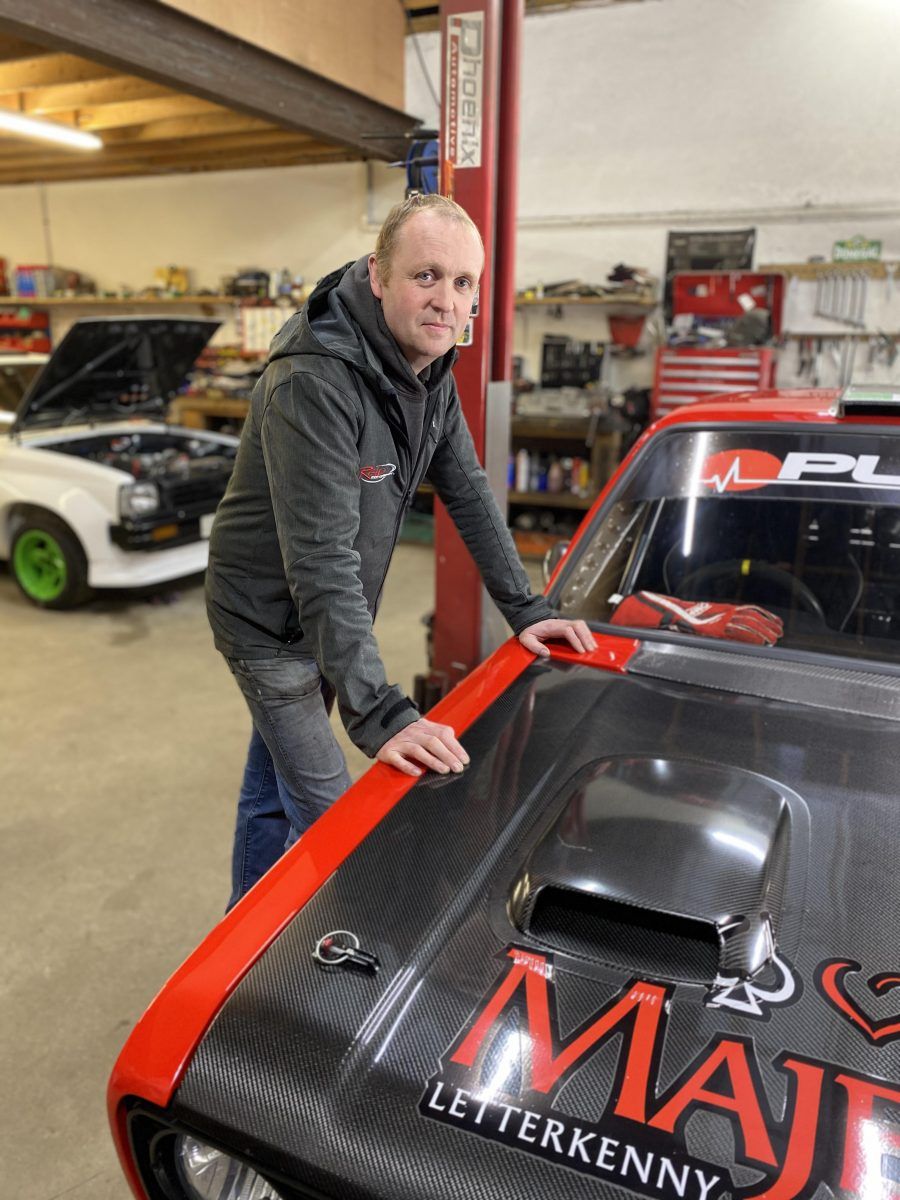 Paul Reid at his workshop in Illistrin Photo Brian McDaid

Over the years Paul has developed a local crew that work as a team on the weekend of the rally to meet and deal with rally crews as they come off the stages into service.

The crew in the car will give the service crew information on arrival if they just need the car fuelled up and a routine check done or if the car needs more work done.

If they have brokem something that’s when they will focus on that car by putting extra manpower on to get it repaired and back out within the allocated time. That’s where Paul’s attention to details of every car that they prepare and run for competitors come into play.

Paul will know every car inside out as he more than likely built the cars himself. He also backs up that first hand information with a database for each car.

Paul also has the benefit of being a good driver himself, competing on a good few rallyies himself with his brother Karl on the notes, so he can relate to drivers demand when they arrive into service.

Reid Motorsport focuses its efforts in the preparing and the running of the two wheel drive car like the Escorts, Corollas and Starlets, all of which transmit the power on to the road through the back wheels and also runs a few front wheel drive Civics. It is ini the national, or modified, as they’re called that Paul’s specialty lies. He’s not focused on the four wheel drive WRCs or R5 cars. 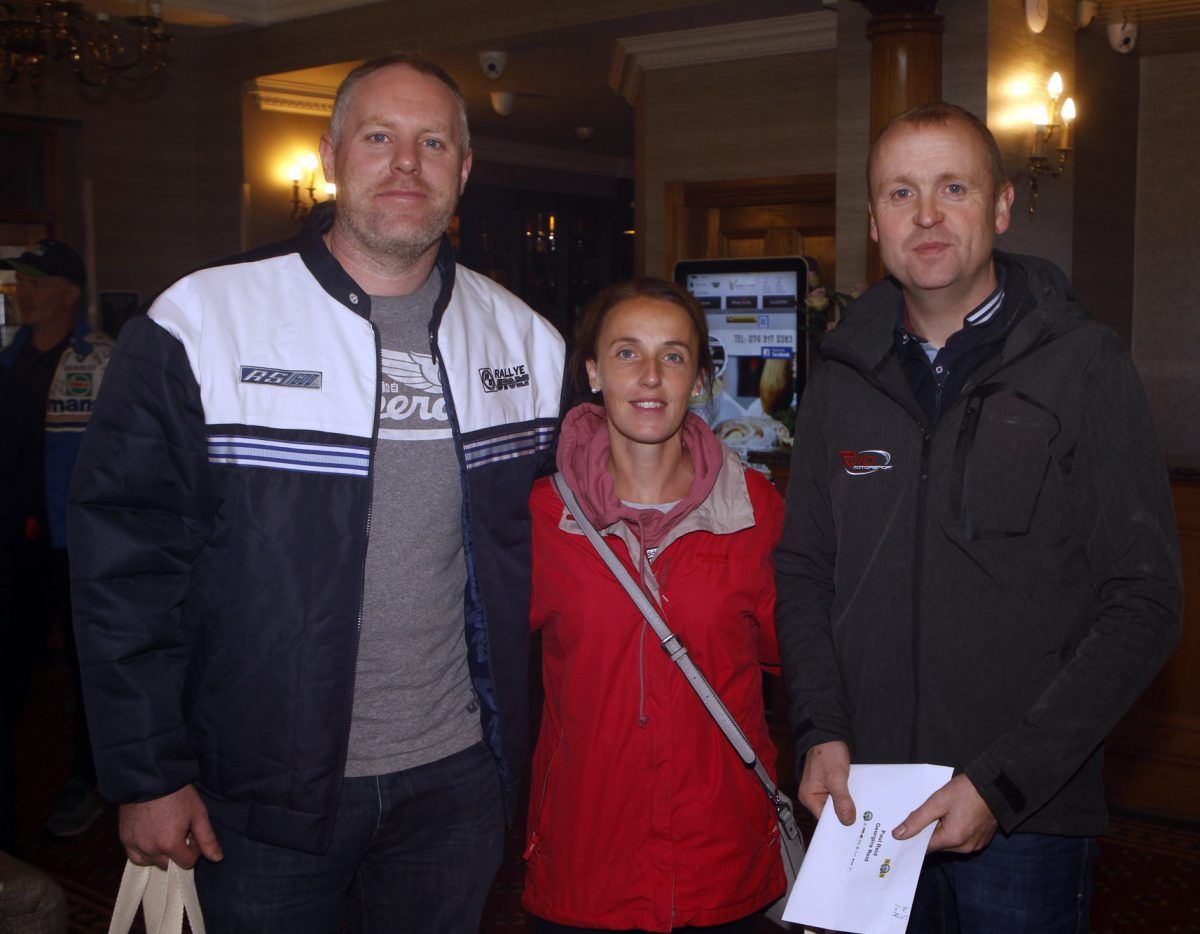 A Donegal Rally would not be a Donegal Rally if it didn’t have Ford Escorts there. They are the cars that draw the crowds to the events. They may look like the escorts that won in the hands of Ari Vatenan, Brian Nelson, John Lyons and our own Vincent Bonner – all outright winners in their day – but nowadays cars like these in looks are still getting the hair-standing-on-the back-of your-neck reaction when drivers like Damien Tourish lands at a junction at speed, carrying that momentum through the junction thanks to his talent as a driver and the development of tyres brakes and suspension on these old Escorts.

Damien is just one of the Donegal drivers that Paul looks after the servicing for. Tourish is a man of few words who is more likely to let his driving do the talking.

In the lockdown Tourish’s car has had a full manicure and spa treatment in rallying terms and is presently back to a basic beautiful blue at Reid Motorsport. Inside the car also has had a major rebuild and the car is back out on the road and has a small one day rally under its belt. 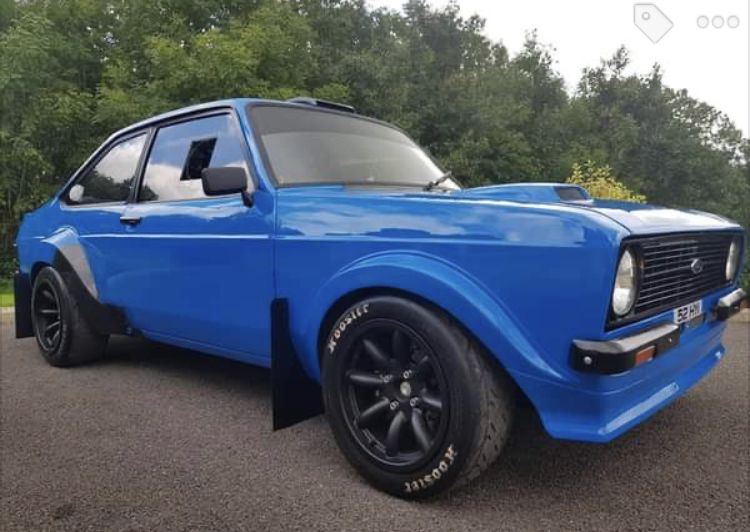 OUT interview with Paul was planned for Monday evening, but this moved to Tuesday evening when Paul was called away to deliver and collect a few cars on Monday.

On Tuesday evening we planned to meet at 6pm and at 5.30pm Paul sent me a text which included his post code, just in case I got lost. As it happened I did get lost – not in finding Paul’s workshop but got lost in time,

It’s coming nearer to 40 years since I first turn right at the Illistrin and right into Reids, Paul’s parents house Charlie and the late Lottie Reid (four doors down) and parked up in their backyard in my white Mk2 Ford Escort 1600 Ghia.

It’s a house where the planning of many successful Donegal Rally from international to navigation was planned out by both Charlie and Lottie, who were as passionate about preparing and running the rally as their son Paul is today in the way he goes about building and preparing cars for competitors as if they were his own car.

Back in the day if you came to the front door of the house you were a stranger, you needed to know just to come on in and stick the kettle on and soon you would have a few to share a pot of tea with you. Or at Reid’s Autofactors on the Port. Road, where the art of conversation was never lost. 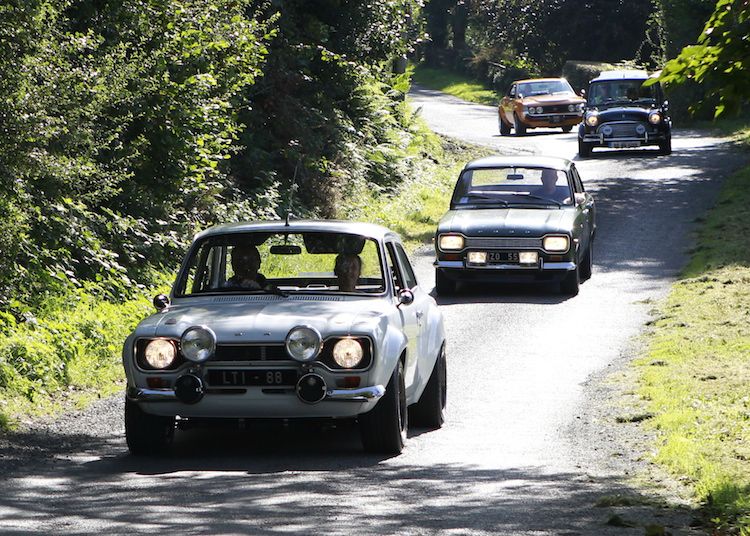 On Tuesday evening, Google Maps told me it would take me eight minutes to make the journey from Letterkenny out to Reid’s in Illisrtin.

What it didn’t tell me that it would take two hours to do a 20-minute interview, but sure I knew that anyway – and away as happy on that road less travelled. Call it Donegal rallying heritage, call it whatever you like, these are the places that memories are recounted on a wet Tuesday, not that long past the anniversary of Lottie’s passing.

I can still hear her laugh, and her passion for motorsport is in good hands.

Paul gave up a day job to concentrate on his business of motorsport shortly after his mum passed away now with the support of his wife Gorgina and indeed all the Reid family including Charlie (who still plays an active part in servicing come Donegal Rally time), Paul has a quality of appreciation the history of any car that he works on and also has the knowledge for the road ahead in this sector. 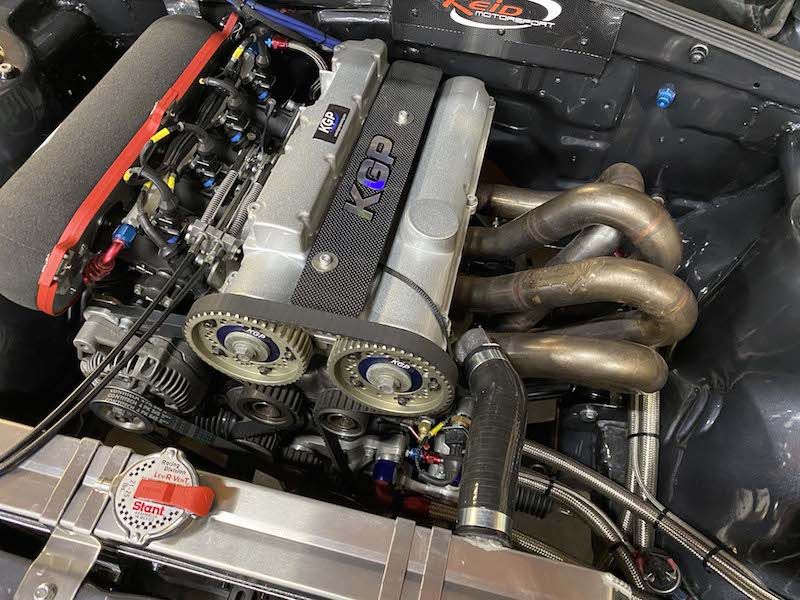 A view under the bonnet showing the attention to details of one of the cars built by Reid Motorsport Photo Brian McDaid.

Suggesting that he was the Donegal version of Sydney Meeke, who was the builder of all the great back wheel drive cars for the likes of Fisher, Bonnar, James Mc Daid and John Lyons to name but a few, Paul was quick to flatten a podium I was trying to put him on.

“I’m as happy working on a car for a rally or getting a car to the end of a restoration project as I am getting someone’s car ready for an NCT test.

“Maybe we are doing our bit to keep these modified cars up to spec but at the end of the day I’m just enjoying my work”, a slightly embarrassed Paul Reid replied.