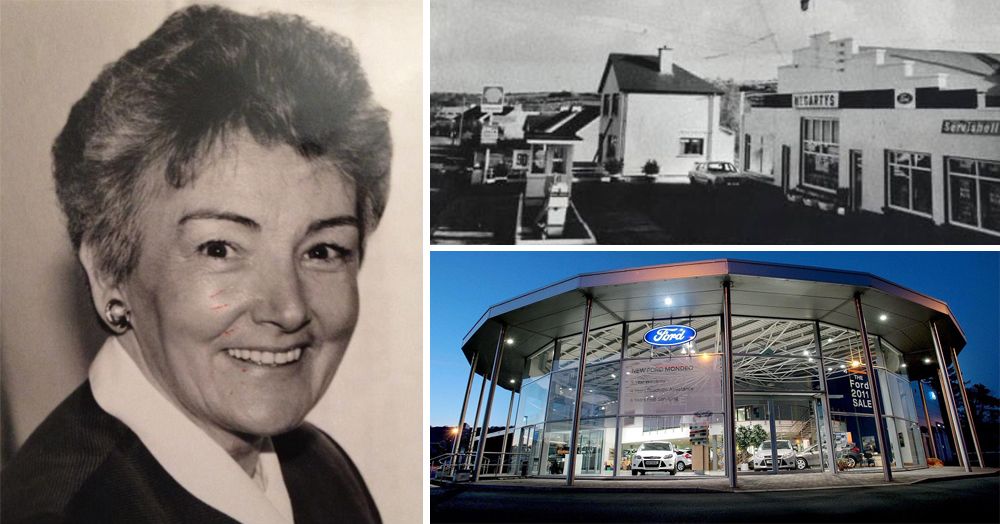 As Hegarty’s Garage in Letterkenny celebrates their 60th year in business, our motoring columnist Brian McDaid looks back on the story of the family garage with a dear former colleague.

It only seems like yesterday since Hegarty’s, then called Hegarty’s Auto Services, were celebrating 30 years in business at the old garage in Ballymacool.

Andrew and Paul Hegarty are now the second generation of the Hegarty family and a third generation Eoin Kelly, Katherine’s son all work in the family business which is now on the way up the Mountain Top at Carnamuggagh.

Chatting to Andrew Hegarty this week, called after his father Andy, we recalled a lot of memories about Hegarty’s down through the years. Then Andrew said the familiar words echoed in the new showroom, ‘You better see Martha’. 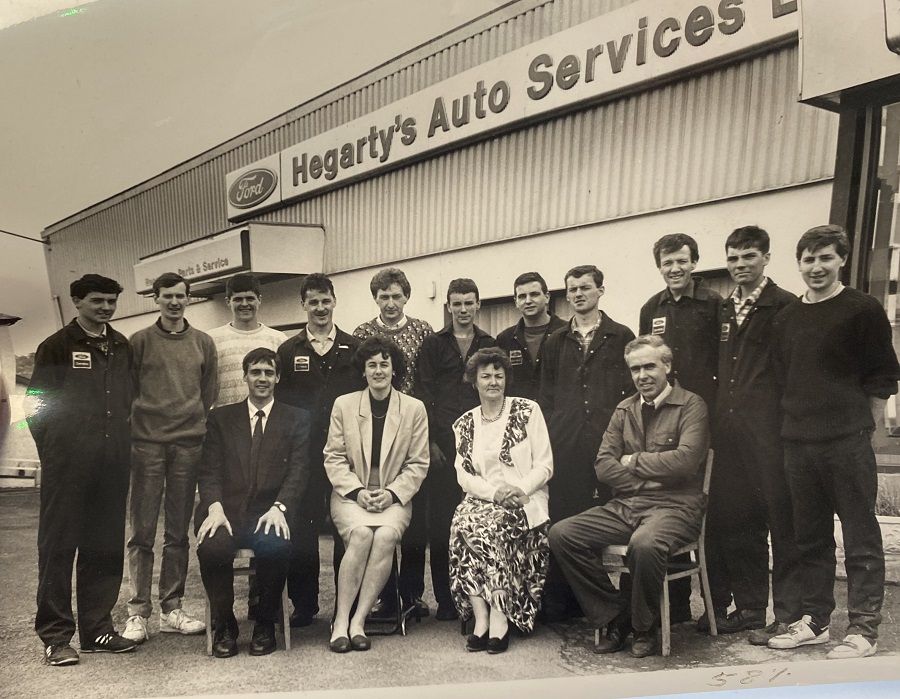 Staff at Hegarty’s garage in Ballymacool. 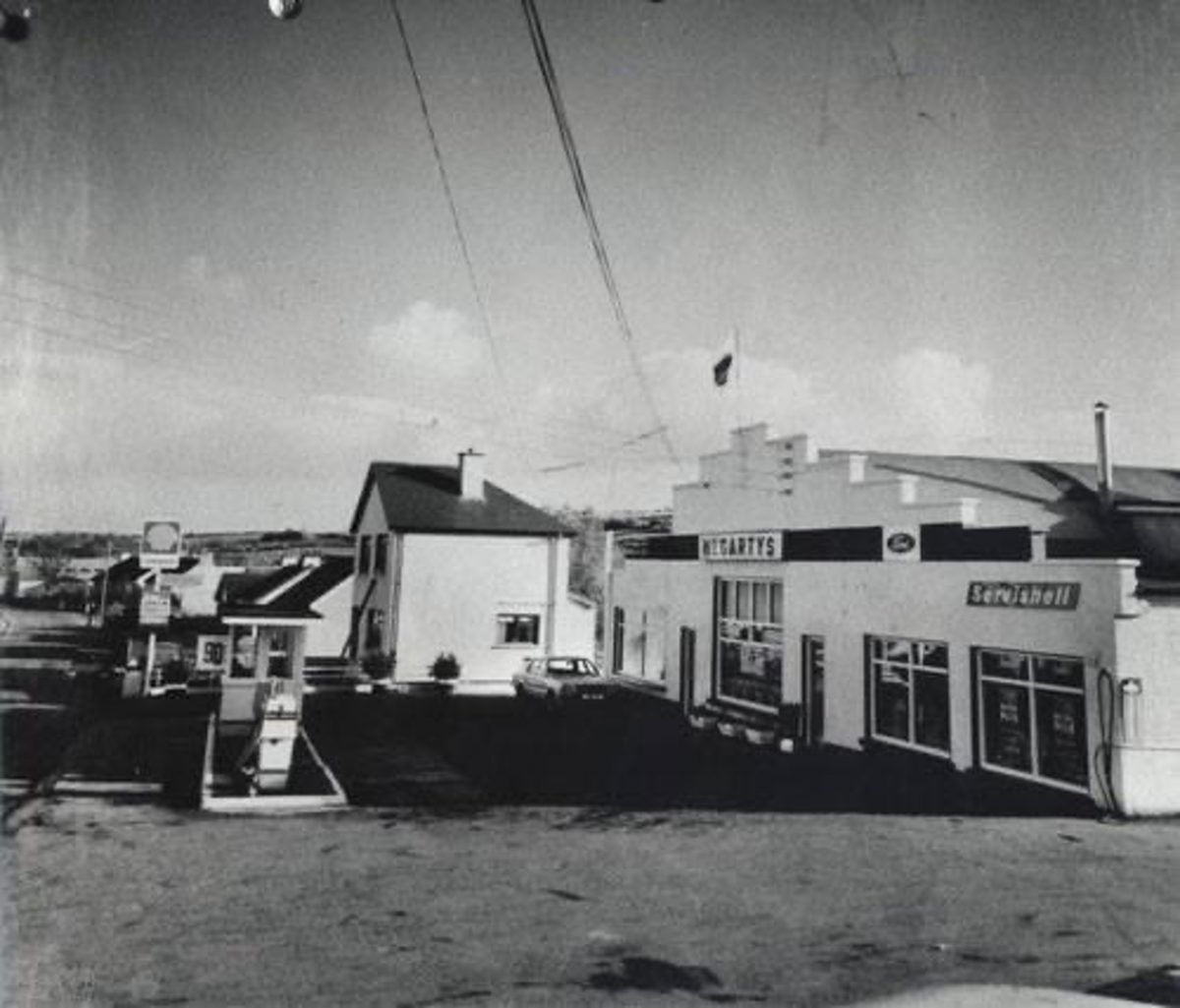 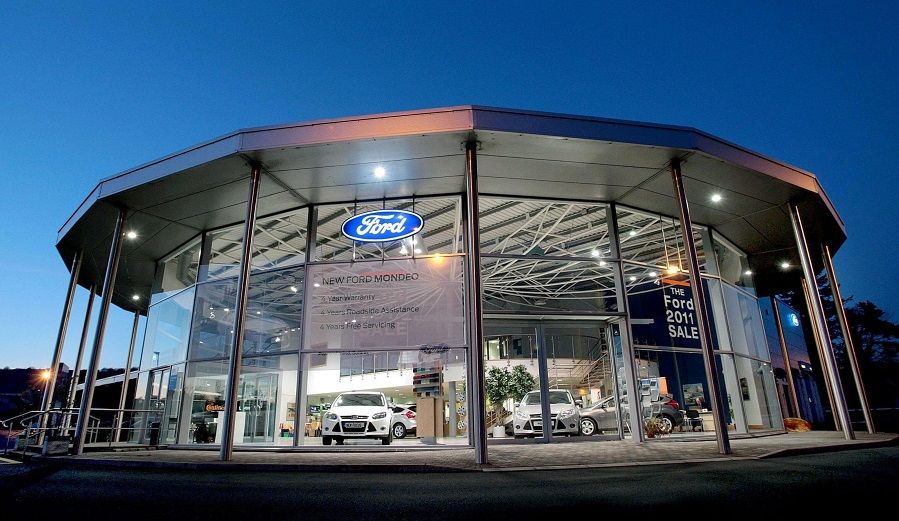 Hegarty’s in Letterkenny as it looks today celebration it 60th year in business.

As a former petrol pump attendant at Hegarty’s I always knew that when you heard them say ‘You better see Martha’ it more than likely meant that the money was out from the previous nights takings on the pumps, or ‘shortages’ as they were called.

I can look back on them ‘shortages’ years on with less worry calling up Martha this week who has now retired from Hegarty’s for a few years. When we finally got down to chatting about Hegarty’s, Martha story starts with the last time she ever met Andy Hegarty senior and his words she recalled he said to her. 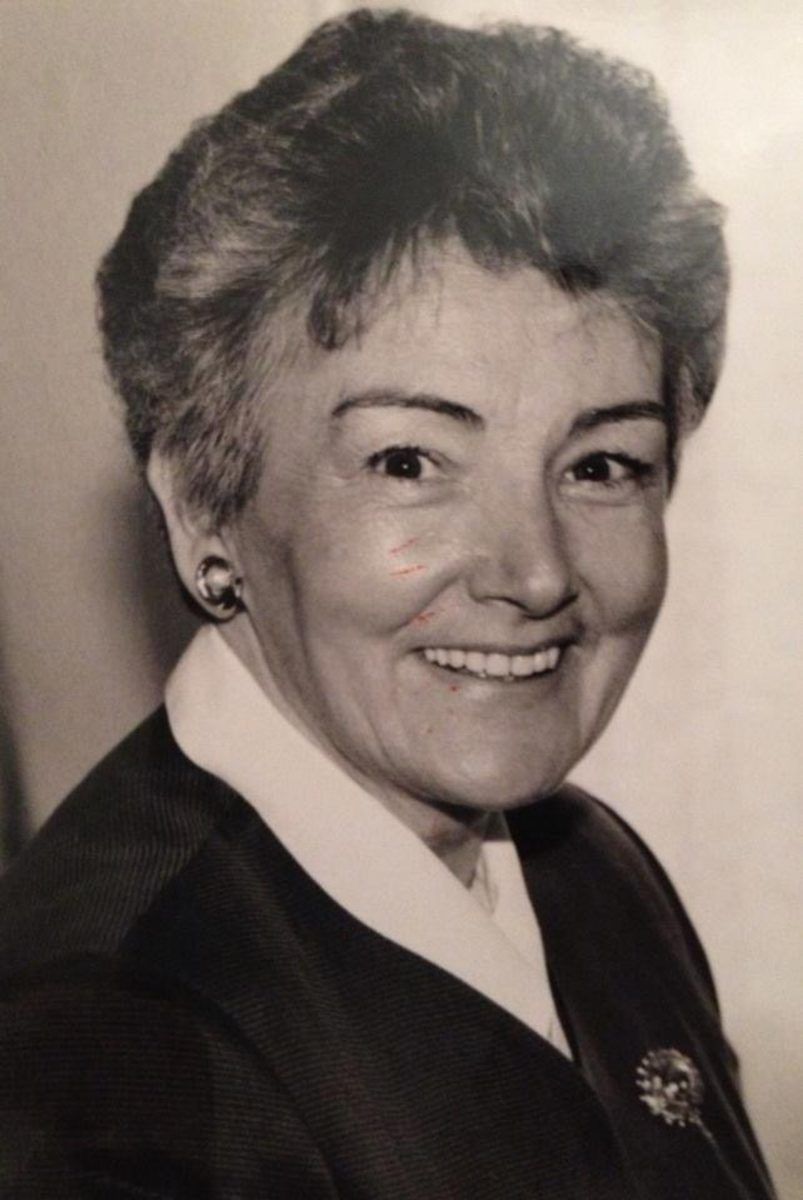 Martha Lynch who was one of the longest serving member of staff who talks about Hegarty’s in Letterkenny this week.

‘I should have taught you to drive’ was what he jested to her.

Even in very ill health Andy Hegarty was still trying to look on the light hearted side of things as he chatted to the Manorcunningham woman who helped in no small way to put Hegarty’s Auto Services on the motoring map. ‘Mr. Hegarty’ was the way Martha addressed her employer all of her working life.

On the weekend I sat in the same house where Martha still lives. Andy Hegarty knocked on the door 55 years ago one night asking her if she would come to work in his garage.

Martha had moved from a job with O’Neill and McHenry, a grocer Wholesaler in Derry to Sam Roulstons, general merchants at Lr. Main St in Letterkenny. But she wasn’t settling into her new job.

A chance meeting with a former work colleague of hers from her days at O’Neill and McHenry, Hugo Coyle, who was a rep on the road, suggested giving Andy Hegarty a call. He was looking for someone to work in the office at his garage in Ballymacool. 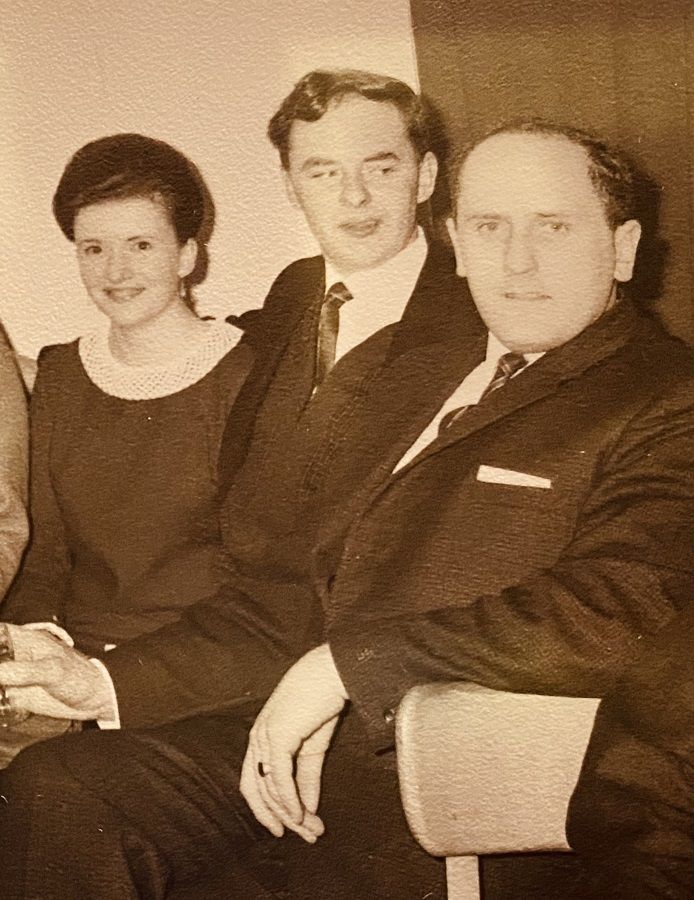 The late Andy Hegarty centre with the Late Hugo Coyle pictured with Andy’s wife Evelyn in the early year of Hegarty’s Garage.

A few nights later, Andy landed out, at what was her mother’s home at the time, to ask Martha if she would come and work for him. Martha was getting £6 a week in her Roulstons and Andy offered a £1 pay rise to secure the transfer deal for Martha to move from the messages business to motors trade.

In 1965 Martha started her new job in Hegarty’s garage. In all these years she never learned to drive a car but learned to drive a business on. She had great belief in her Glenswilly-born business man.
Mr. Hegarty was one of the hardest workers she ever knew.

She recalled ‘he was there first thing in the morning to open up the garage and he was there last thing at night to close up the petrol pumps’. He would have thought nothing of going out and serving petrol at the pumps standing having a yarn with a customer, petrol pump nozzle in one hand and the other hand holding his jacket coat closed.

Andy started in the motor trade business as a store man in McClean and Mc Laughlin’s in Letterkenny who were the Main VW dealers at the time and Ford Tractor Agent. After he left there he started up his own garage in 1960 in Ballymacool. He had an agency for Fiat and Alfa Romeo for a short while and got the Opel Agency the year after Martha started.

‘We sold some Opels, especially Kadettes’, Martha recalled as she flicked through an old album filled with paper cuttings mixed in with a photo album of her own family. There were more car deals done on the back of a Major Cigarette packet by Andy back in the day. Then Martha had to figure them out to record the sale. 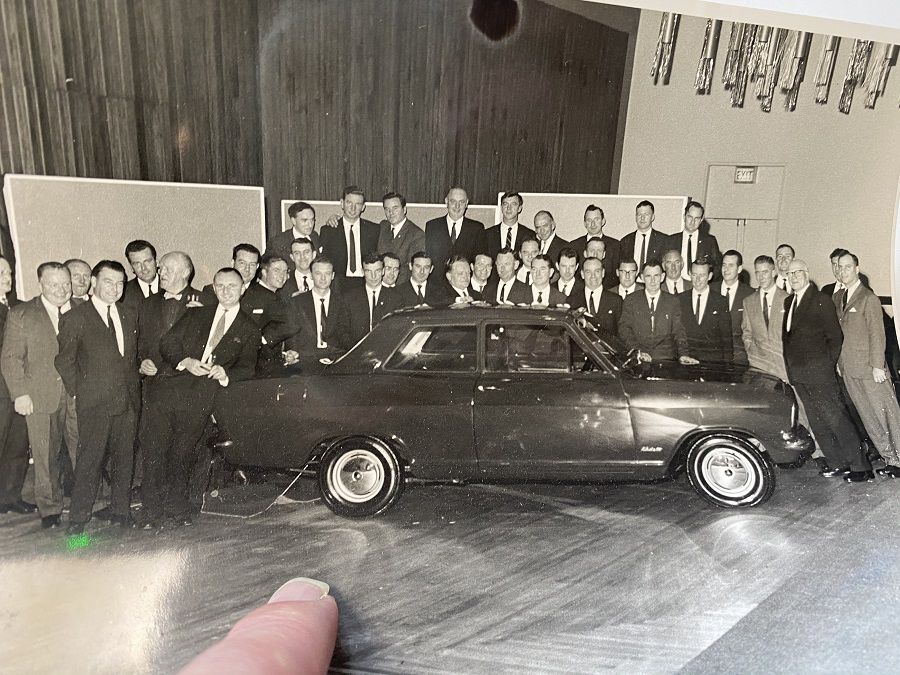 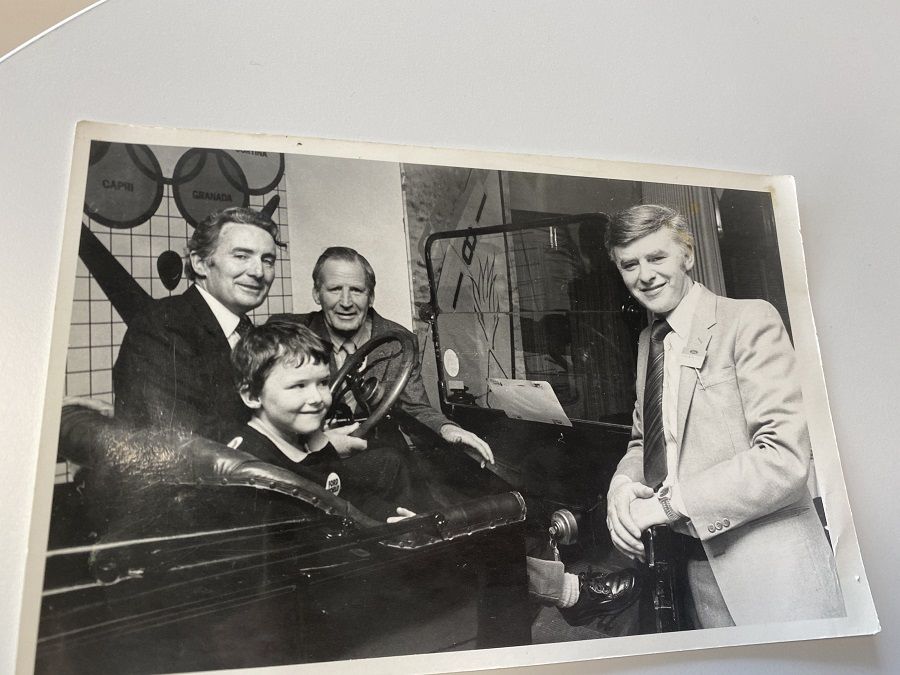 The Late Andy Hegarty pictured at the old Garage as a very long Paul Hegarty keeps and eye on his daddy.

The week that the garages were off at Christmas was a very busy time preparing the documentation for the registrations of new cars for the second day in January. Everything was taken over to Lifford at that time long before you could do business all online as it is today.

In the early 70s, Hegarty’s took on the Renault agency with Opel. It was a very busy place before any major extensions were built. We were doing self drive cars now known as rental from early years. A lot of our customers came on holidays to Donegal and called year after year to rent out our cars. In the times of the Troubles in the North, northern customers felt very safe on holidays in Donegal registered cars. In the mid seventies we took on the Ford agency which let us develop a bigger commercial van dealership

‘It’s hard to believe that it’s 43 years since we moved to Ford,’ Martha recalled – they were some of the busiest years for the business. As well as selling to the local market, Hegarty’s also exported a lot of commercial vehicles into the UK in their early years. Regular customers are not just looking for one van but maybe as many as ten.

Big and all as the garage was in Ballymacool with all the extensions they built, Mr Hegarty still had to store an overflow of vehicles out at his house in a makeshift compound. Sadly Mr Hegarty never lived long enough after his retirement in 1999 to see the development of the family business in the hands of the next generation to the present day premises at the mountain top.

Martha, even in retirement, keeps a watchful eye on the progression of Hegarty’s and also on Hegarty staff from the past and where they went around the world and the business they set up and locally keeps an eye on people that once worked with Hegarty’s that have set up business locally.

And you couldn’t get any more local than young Damien Daly who lived right next to Hegarty’s in Ballymacool, just one of the Daly boys that worked in the pumps. Young Damien remembers starting on the petrol pumps when he was going to St. Eunan’s College and talked about him proudly celebrating his first decade in a business partnership with Kernan’s group which have brought three local business into the group in Letterkenny at Old Town, the foot of the town and Tullygay, one of which Coyle’s old shop being the place that Hugo Coyle who put in a word for Martha to get her start in Hegarty’s once owned. 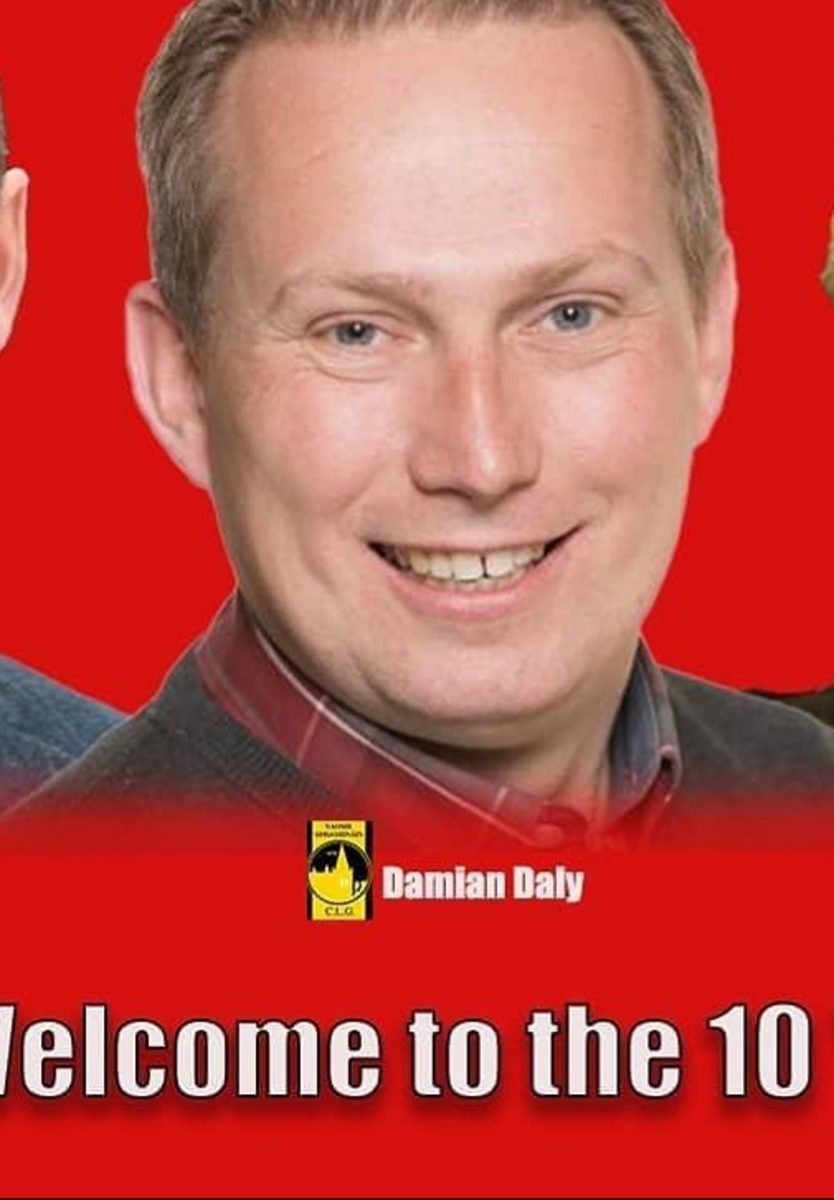 Martha chatted about Mr. Hegarty who in his later years took an interest in Gaelic Football and would head to Donegal matches with Martha’s husband Colm,

At one match he spotted one of the young Daly’s, Damien, lining out for Donegal. Martha’s husband recalls Andy down and around the fence to where Damien was playing and there was Andy encouraging the young footballer to get stuck in – which would nearly be the opposite to what he would be advising the young neighbour boys to do when they would be blasting the ball out of their garden and on to the bonnet of a line of cars on show.