Company at centre of bogslide planning second windfarm in area

A company on whose land a huge bogslide took place causing a major ecological disaster outside Ballybofey have applied for a second wind farm in the area.

Shocked residents yesterday received letters from Cork-based company Enerco Energy telling them of their plans for a new project.

The project, which is also planned to be built at Meenbog, is understood to involve up to 17 new wind turbines.

Company spokesman Stephen Quinn told residents in the letters of their plans.

He wrote “As you may be aware we were proposing a wind farm development which included turbines in your locality in 2017.

“Due to changes in the Donegal County Development Plan at that time, the proposal was amended and proceeded without the turbines in your locality.

“That proposal, Meenbog wind farm, was granted planning permission for 19 wind turbines in June 2018 and it is currently under construction.

“Following further changes to the Development Plan, we are considering the potential for turbines in your area again. 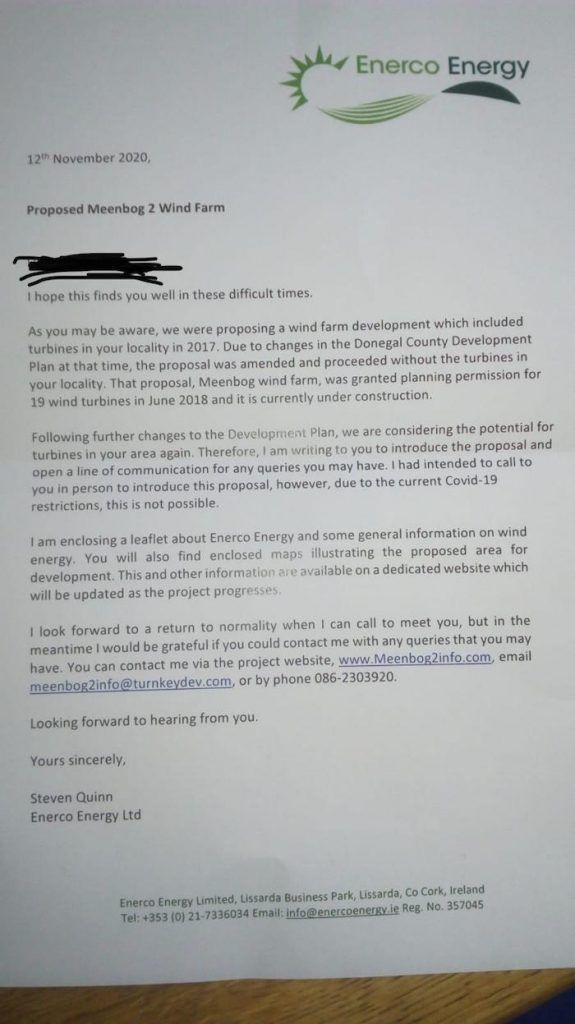 “Therefore I am writing to you to introduce the proposal and open a line of communication for any queries you might have.

“I had intended to call to you in person to introduce this proposal, however, due to the current Covid-19 restrictions, this is not possible.”

The letter is dated last Thursday, the day before a massive bogslide in the area.

The incident saw thousands of tonnes of land and dozens of trees moved and displaced.

A video of the incident has been viewed more than one million times.

A cross border multi-agency meeting was held on Monday to plan a response to last week’s ecological disaster.

Donegal County Council says there has been significant pollution impacting the Mourne Beg River resulting from the incident in the townland of Meenbog, Ballybofey.

The council confirmed the location of the bog slide is within the site of a wind farm that is under construction.

The wind farm developer, Enerco Energy Limited, has suspended all works at the site with the exception of those that relate to mitigating the impact of the bog slide and reducing the risk of further slides.

The multi-agency group will reconvene on Thursday to review matters and further co-ordinate the response.

Donegal County Council, in co-ordination with the Roads Service in Northern Ireland, have closed the Dergline Road/Corgary Road between the N15 and Castlederg/Aghyaran (L6554 – U163) as a precaution until further notice.