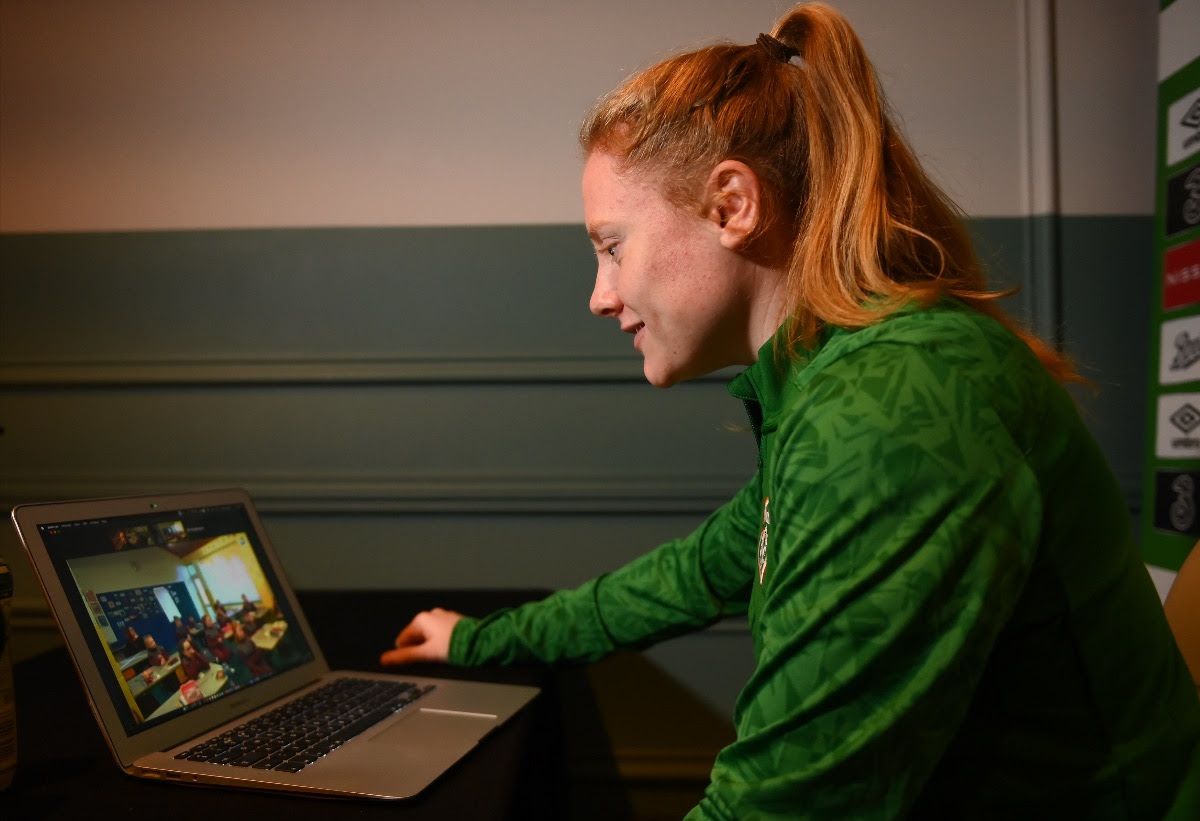 INSPIRING children to follow their dreams is something that Amber Barrett feels passionate about – and it’s why she has linked up with Fighting Words.

On behalf of the Republic of Ireland Women’s National Team, Barrett held a video call with 5th class pupils from Scoil Cholmcille, Ballybrack to answer their questions about her career and representing her country.

Through the link up with Fighting Words, who provide free tutoring and mentoring in creative writing and related arts, the initiative is aimed to inspire the schoolchildren to write stories & poems about how sport can inspire them.

Barrett, who has scored two goals in 19 senior appearances, was keen to get involved having previously completed a Msc in Education in DCU. She is currently in camp with the Ireland squad preparing for the 2022 UEFA European Championship against Germany in Tallaght Stadium on December 1st.

“It was great to chat with the school kids from Scoil Cholmcille and I was very impressed by all of their questions. Hopefully I gave them something to go away and write their pieces which I’m sure will be fantastic,” said Barrett.

“All of the players on the Ireland Women’s Team feel that it’s important for us to stay connected with the younger generation and to inspire them in a positive way through doing our best in every game. Helping them to be more creative and confident is something that we, as a squad, are delighted to be part of.

“It’s also important to highlight the work that Fighting Words do in this area. It is through organisations like Fighting Words that children can embrace reading & writing while not being afraid to express themselves.”

Mark Davidson, Programme Coordinator for Fighting Words, said: “Sport inspires us all and captures imaginations. Pairing creative writing with the inspirational power of sport is a natural fit and it led us to create some really unique poems.

“Fighting Words and Scoil Cholmcille are delighted to be involved in a small way as the Ireland Women’s Team prepare for their match against Germany on December 1st… we’ll be cheering them on and hope that the pieces written by Mr. Breathnach’s fifth class group help the team to find that extra gear and keep inspiring us all.”

Each of the pieces written by the pupils of Scoil Cholmchille will be pinned up in the Ireland dressing room ahead of their game against Germany to act as inspiration for the players.