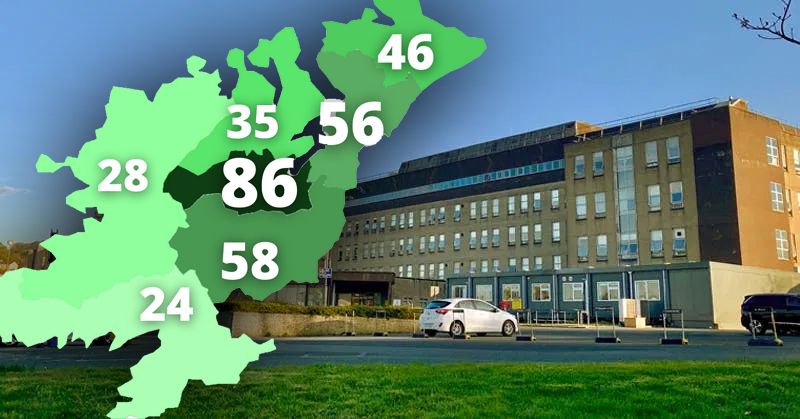 Five of Donegal’s Local Electoral Areas are listed in the ten worst affected parts of Ireland for Covid-19.

The latest incidence rate data ranks Letterkenny with the highest rate of Covid-19 in Ireland, followed by North Inishowen/Carndonagh.

Letterkenny has recorded a slight decrease in new cases, with 86 in the past two weeks. There were 91 new cases of Covid-19 in the Letterkenny area in the previous period between 10th – 23rd November. The 14-day incidence rate is 288.7 per 100,000.

The North Inishowen/Carndonagh area recorded 46 new cases in the two week period. The 14-day incidence rate is 271 per 100,000.

The Lifford-Stranorlar LEA was the only region to have a rise in new Covid-19 cases in the two week period. Fifty-eight cases were recorded, up from 53 in the previous two weeks.

Milford LEA ranked as Ireland’s worst affected area last week, while this has improved in the latest data. Thirty-five new cases were detected in the region from 17th-30th November – down from 49 in the last period. Milford LEA has Ireland’s fourth highest rate of Covid-19.

Buncrana LEA has Ireland’s fifth highest rate. The area’s fortnightly rate has decreased again by 282 to 250 per 100,000 over the course of the week. There were 56 new cases detected in the two weeks up to 30th November.

The Glenties area recorded a notable decrease in cases this past fortnight, with 28 new cases detected – down from 43. While in the Donegal region, the number of new cases has decreased to 24. The Donegal LEA has Donegal’s lowest incidence rate at 90 per 100,000.

The figures come as NPHET reports 183 new cases of Covid-19 in Ireland and six additional deaths. Twenty-six new cases were confirmed in Donegal up to midnight Wednesday.

Donegal company takes all the hassle out...