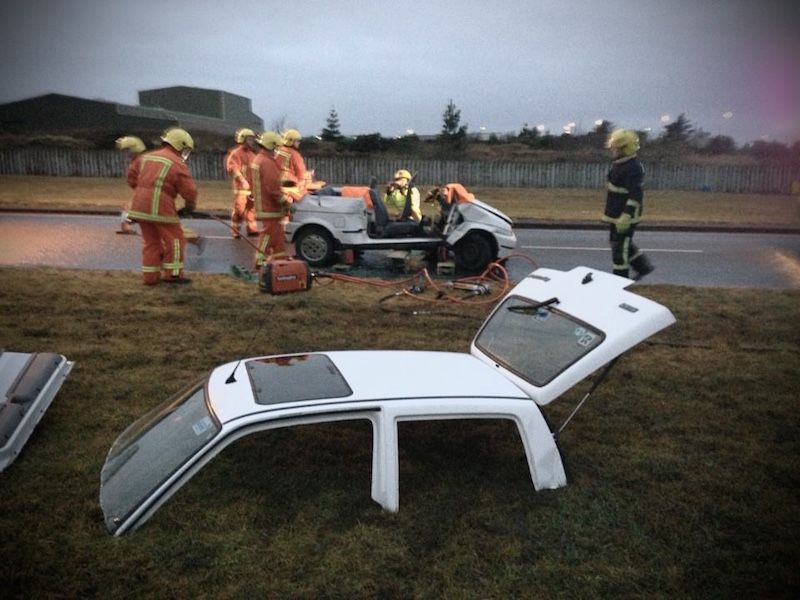 In those days it was the knock on the door in the middle of night or that phone call.

A set of images from eight years ago made their journey this week thanks to the algorithms in my social media account from one of the last training courses I did with the emergency services.

Glancing through these half dozen or so images taking on an exercise-based at Gweedore Fire Station in the industrial estate, it’s the few blurred images as my camera fought to capture the falling light that has brought me back the sharpest memories of attending road traffic accidents in Donegal.

In these pictures, all I see is the movement of a team working at a created crash scene, something that all emergency services are so familiar with.

And yet not one road traffic incident is the same as another even though the end result sadly are so similar. 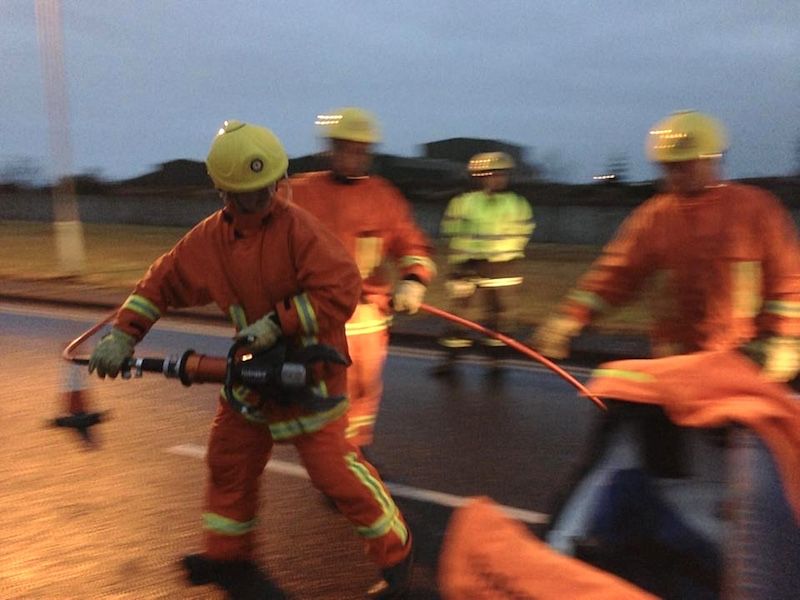 Working against the clock in a staged exercise at the car crash as firefighter work with putting equipment to on a car back in 2012. Photo Brian McDaid.

With the faces blurred in the movement in the low light, all road traffic incidents that you have attended over the years come into focus. A race against the clock to get to the call, a race against what is called the golden hour which is the first hour after a trauma, a race to cut a path for a medic to administer vital first aid.

In the staged incident, the detail was to remove the roof from the car involved in the incident, this was done to get access to casualties that are trapped in the car. This is done by cutting through the pillars that support the roof. The pillar at the windscreen is called the ‘A Post’, the middle pillar are called the B Post and the pillar at the back of the car is called the C Post. The structure of a car will weaken when these are cut so the car has to be supported wooden blocks to prevent the car from closing in and trapped casualties.

On our crash site our car, a Fiat Cinquecento is sitting in an upright position on a solid base of a tarred road. In real incidents, cars could end up on their roof in a field which makes the rescue all the more complicated.

I look on from what it might be like for someone that would meet this along the roadside. I have been unfortunate enough to be called to a road traffic accident as a fireman that ended up having a member of my own family involved in a serious accident.

That was 12 years ago and that person passed away a little over a year after the incident and 12 years on I still can find the two scrape marks along the roadside outside Creeslough that his car made in when it ran into an incoming vehicle. 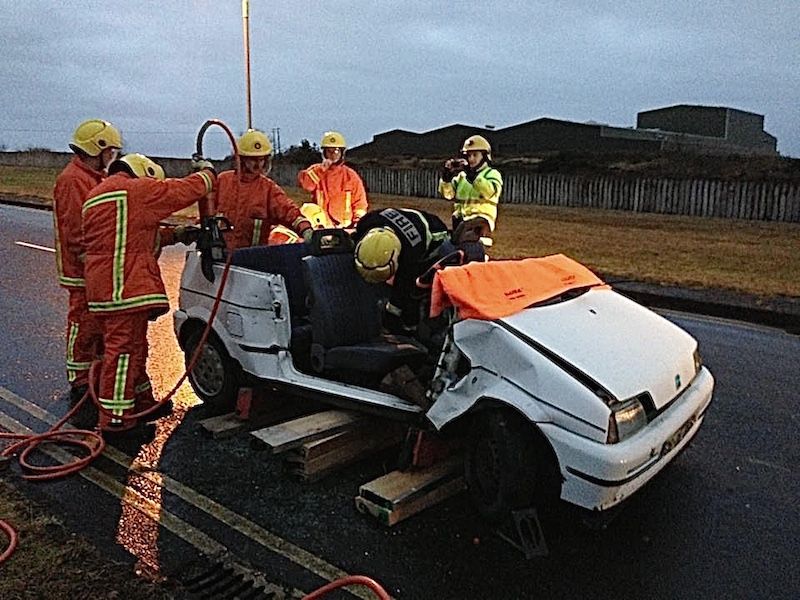 In the incident in which my family member was involved the roof of the car had to be removed in order for the medics to administer much needed first aid.

In his case, the main concern was the injury that he received to his spine. Medics fitted a spinal board at the crash site so he could be moved to hospital.

Thinking back to the course that we did in Gweedore which was done around four years after the accident my uncle had in Cresslough in 2008. These both are sharper in my mind now that they were at the time of the event, thanks to these pictures from the training exercise. 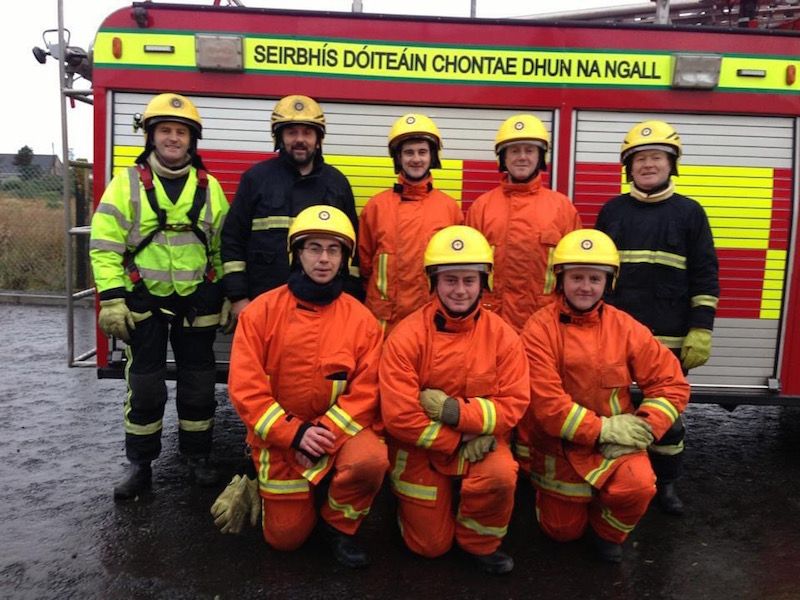 Members of the Donegal Fire Service who completed the two days road traffic incident at based at Gweedore Fire Station in 2012.

As fire-fighters, you train and prepare for working at car crashes as its part of your job. You arrive at a place of work which will be a different location and a different set of circumstances every time and more likely than not will never be within the nine to five work-day that others have. These few old pictures one this week in December in 2012 as light has fallen feel very like what a night-time accident might look like for emergency services might be called to. 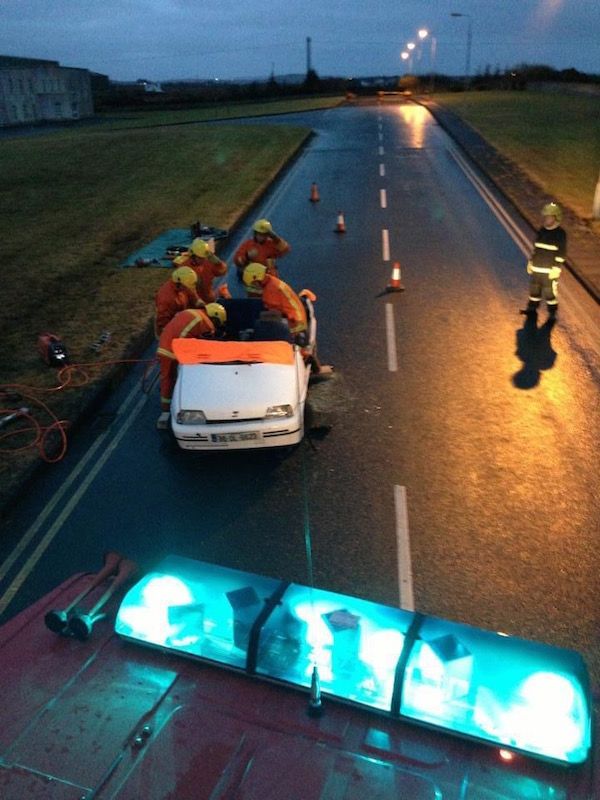 A view of firefighters on a road working at a single vehicle car crash which was set up in for a training exercise in back in 2012. Photo Brian McDaid.

So on the run into Christmas even though we might think we will be doing far less driving this year, prepare for journeys big and small to ensure that you cut your risk to the minimum and with a bit of care firefighter and medics will not meet you on the road in their line of duty. 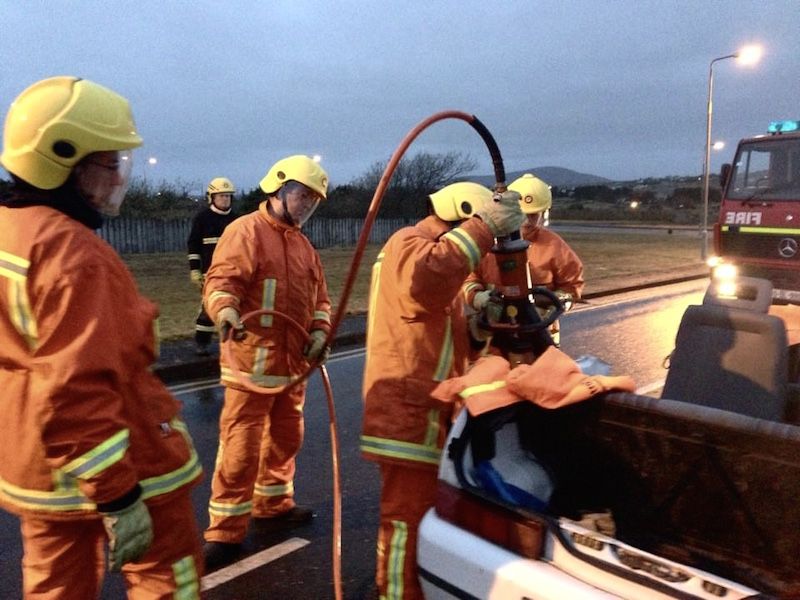 Firefighter working on a stage road traffic accident as the remove part of the car in an attempt to release a casualty. Photo Brian McDaid.