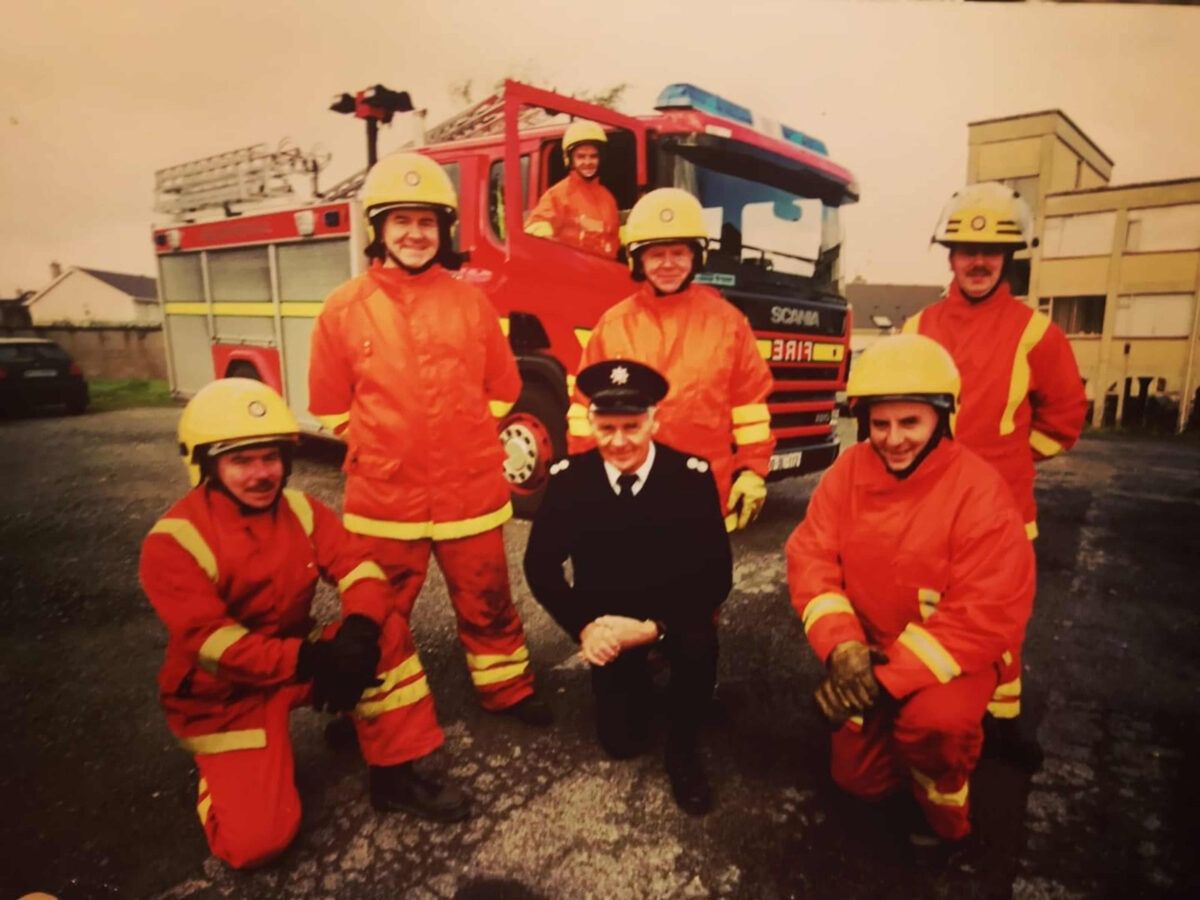 SAINT Patrick’s day was on a Monday that year; a day that you didn’t know what it was going to do, weather wise, rain, shine or even hailstones for the parade.

Shamrocks and St Patrick’s Day badges were on show from them on their way back for morning Mass heading up the High Road.

St. Patrick’s Day was a day I never looked forward to, My father took a brave old drink that day, so he came with a weather warning – especially when he got home from the pub.

The Snorkel always looked well. It was the pride of the fleet of Donegal fire engines. It was only three years old when I started with the Fire Service.  It still had that new smell to it.

Some of the crew came in on the morning of the parade  to get her ready to go down Letterkenny Main Street.

In her day she was so big that they had to take two foot out of the station floor so she would fit in the door.

Three of us – the late Sam O’Donnell and the late Eddie Curran and myself – had only started as new recruits a week or so before.

The Snorkel, YZP 999, was a fire engine with a glorious sounding Perkins V8 engine, made by coach builders Dennis  and with a platform fitted to the rear that could go to a working height of 46 feet.

It was added to the turnout of Letterkenny Fire Station  to cater for the then new wing of the Letterkenny General Hospital, which was four storeys high. 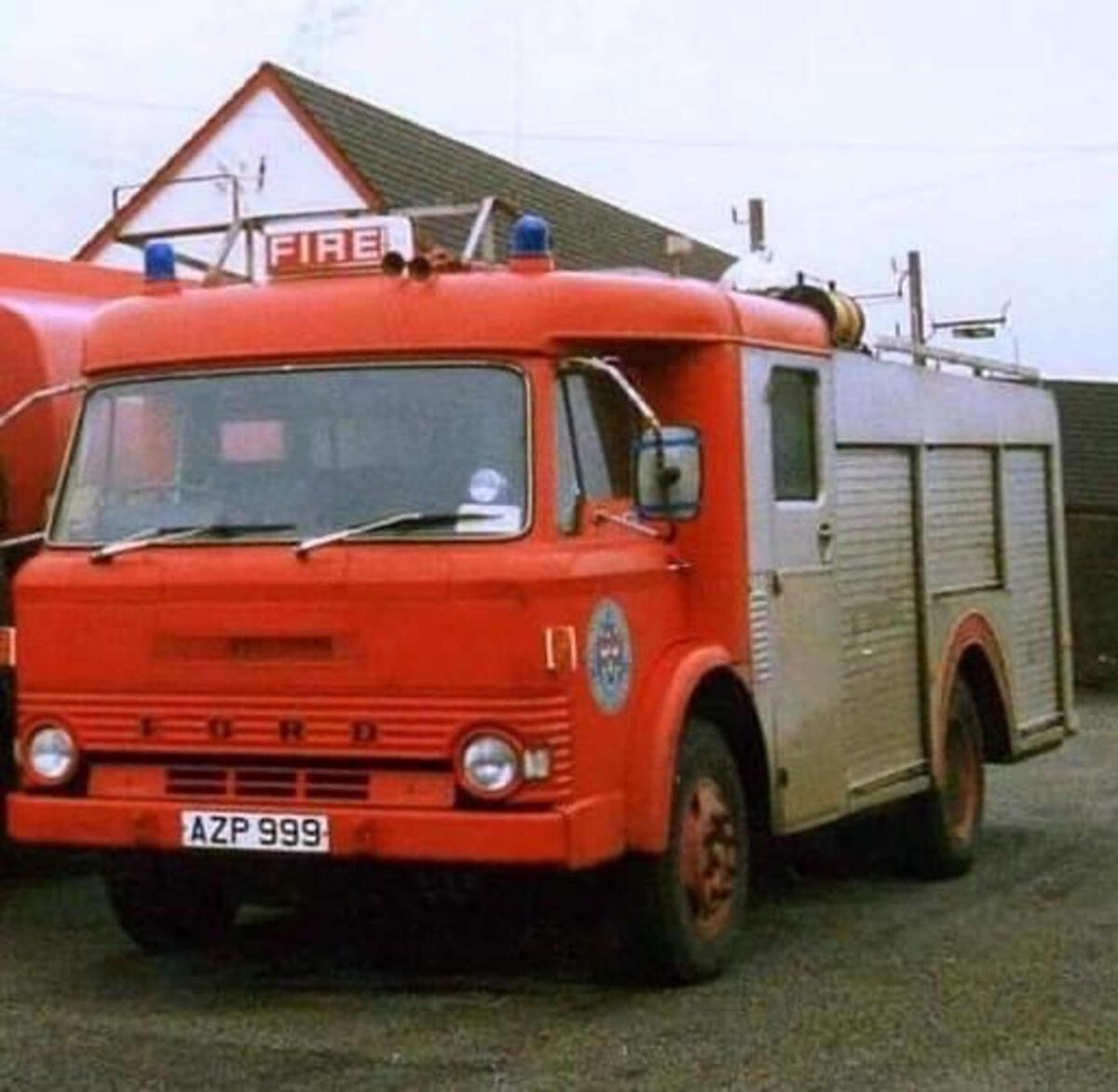 AZP 999 our Ford D series or YZP 999, the Snorkel was the fire engine that always led the parade in Letterkenny in those days,  be it on St Patrick’s Day or at the International Folk Festival parade and the firemen were fully kitted out in their gear.

This was all pre-planned in the event that a fire call came in while we were taking part in the parade. Being at the front we could breakaway and in the days before mobile phones we could head back to the station to see what the call was.

‘Throw out a line of cones along the entrance there boys, some of these ones would park in your eye’ was the order given by the station officer before he sent us home for a bite to eat before the parade.

I just had put some pepper on a bowl of soup and was stirring it with my spoon to cool it down a bit when I heard the old siren blowing followed by the bleeper going off on the belt of my trousers. Heading down Glencar I could hear the siren going off for the second time and the bleep paged for the second time too. ‘This must be a bad one’, I thought to myself.

The old siren was a great thing, the public knew right away there was a fire call, even a Garda on duty that day at the foot of the New Line Road stopped the traffic to let us through, headlights and hazards blazing as we made our way to the station in the High Road.

The call came in as a house fire. The senior firefighters went through the procedure of donning their fire kit, wellingtons leggings, tunic, helmet and gloves, for me and my two new fellow recruits, Sam and Eddie, we were up to high doh. This  was going to be our first ‘big call’. 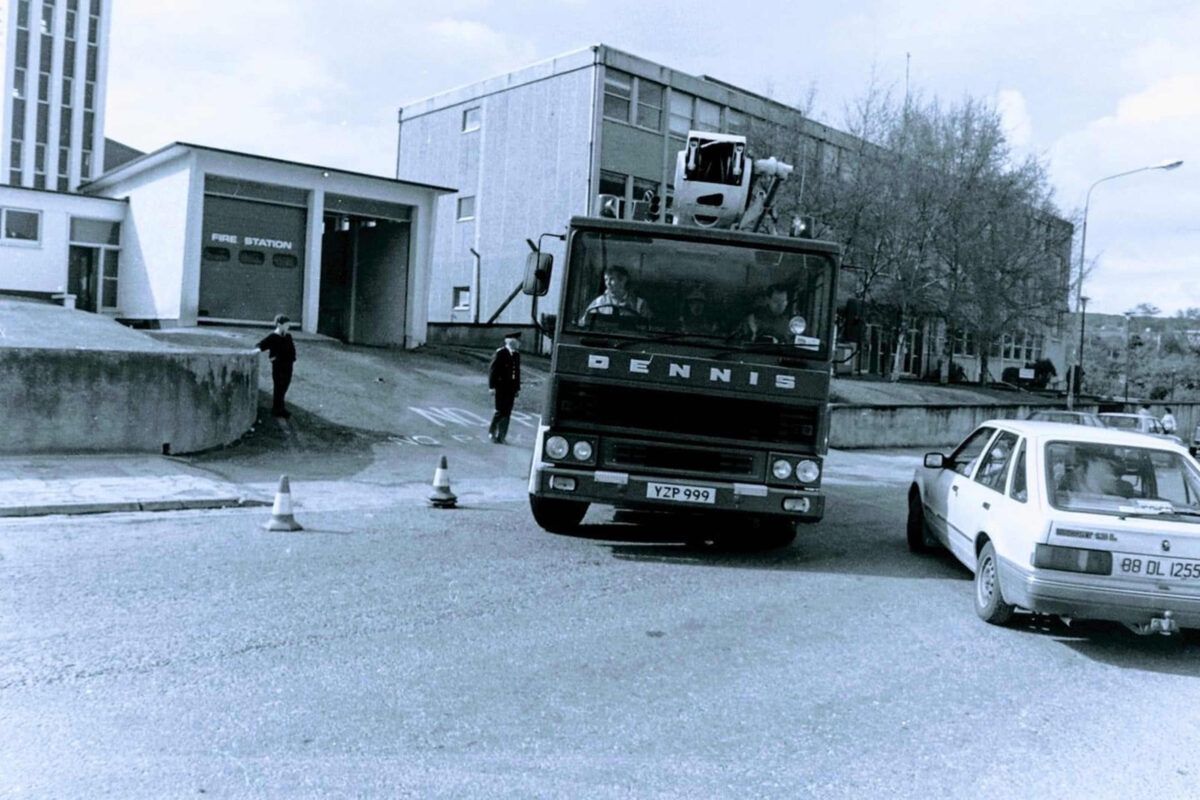 The lowered floor and The old Snorkel fire engine heading out on a call from the old Letterkenny Fire Station on the High Rd. Photo Brian McDaid.

The shiny fire tender that we backed into the station moments earlier in preparation for the parade was now on call, waiting for the sliding wooden doors to open before a few bits of bunting were removed from inside the dash as we headed off to the call, blue lights flashing and sirens blowing.

On our way to the call we met tractors and trailers all shining heading in to take part in the parade in Letterkenny. When we arrived The house fire was smoke filled,  everyone was out thank god and someone pull the door to cut off the supply of

The senior firemen went in wearing breathing apparatus to make sure the fire was out before they started to ventilate what looked like a newly built bungalow. An elderly family member who was watching the house that day had fallen asleep and let the fire go out in a kitchen range.

When they had tried to relight the fire with a small amount of chain-saw two stroke mix, the fire caught on some spilt fuel around the fireplace. In an attempt to put that fire out their coat caught fire as well, but they got it out quickly. Taking some smoke into their lungs and their age it was thought that the best option was for them to be taken to hospital just to get checked out. 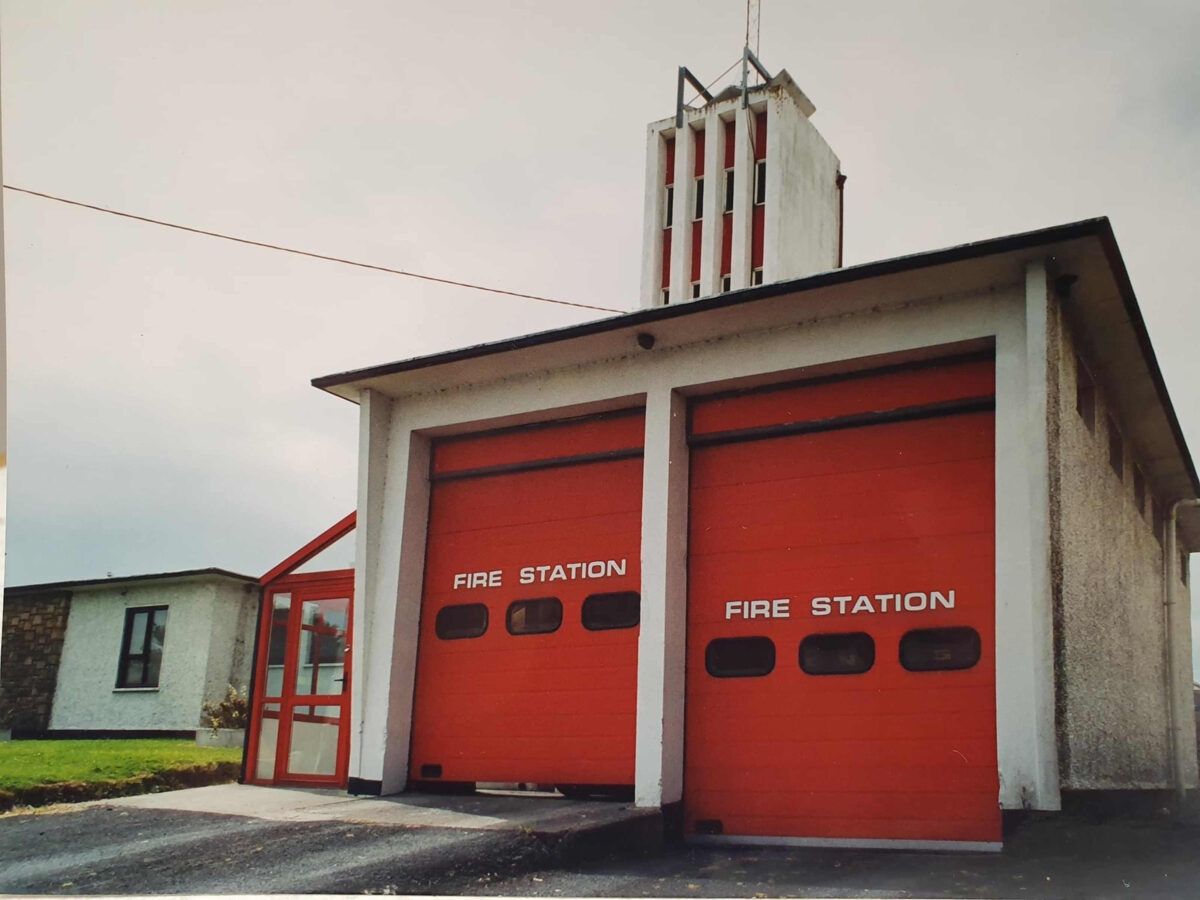 The old Fire Station on the high Rd which had to have it floor lowered to accommodate the Snorkel Fire Engine.

On that St Patrick’s Day cleaning up after the fire and waiting for the house owners to get home, some of us headed down to a local shop for a couple of bottles of mineral and a packet of biscuits for those that missed our dinner.

An elderly lady in the shop heard our dilemma. She offered to make us something to eat and bought a few things in the shop. Her and her sister had tea rooms in the village which were closed for a few year but the furniture was still in place

In less than an hour they had the place was up and running again with  pots of tea and buns and sandwiches arriving out of the kitchen.  It was one of those days that you would always remember and that community spirit from people to do what they could do when they saw someone was in need.

Everything was going well until one of us tucked into a plate of freshly made cheese and tomatoe sandwiches to find one of the easy single slices of cheese still had the plastic wrapping on them. I think we all had a slice of wrapped cheese that we slipped out of our sandwiches and into our coat pockets when the women of the house were busy filling up  the tea pots.

Thirty five years on every time I ever put an easy single cheese in a sandwich I always think of that St Patrick’s Day high tea the morning we got up to get ready for the parade and ended up spending the day at our first big fire call.

This week at the start of a second  year that we are not having a parade or a public celebration of our National holiday, I took time to walk down around where the old fire station once stood now replaced by the Tadgh Culbert Car Park.

Only one of the old fire hydrants on the footpath are a reminder to me of what once was our old station, the hydrant that we used the most outside what once was the old Letterkenny Credit Union is gone. 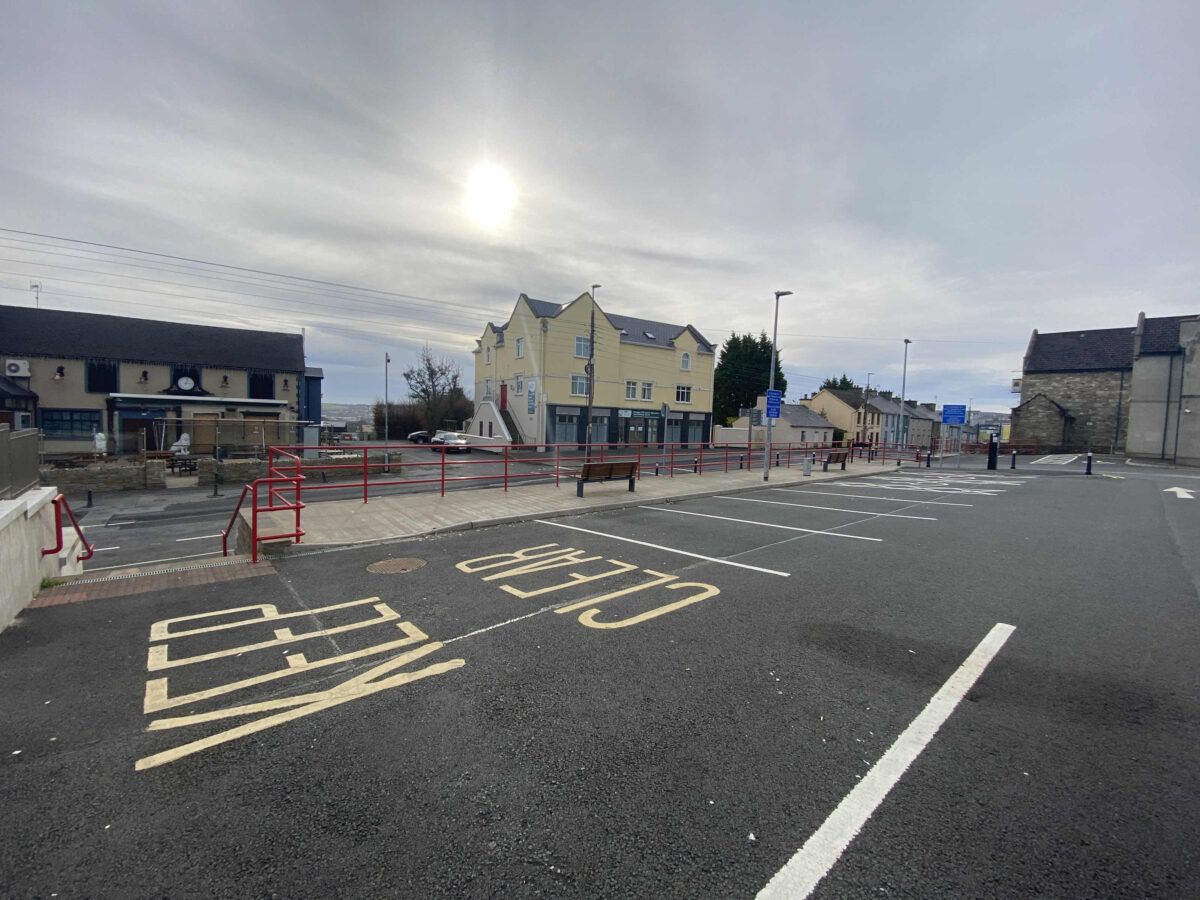 You can see in the footpath where the old hydrant which was worn down through use for nearly 50 years is gone filled in with a square of concrete. Every one that was part of that crew are now long retired, some include them two new recruits that attended their first big fire along with myself that St Patrick’s Day, Sam O’Donnell and Eddie Curran have passed away.

Local parades are so important – especially when you know that they aren’t happening – and this year brings back many memories.  The sight of a fire engine, a tractor, a combine harvester, even a refuse lorry can make children as happy to see up close.

I even remember one year that we were going up the Port Road with a small wooden house belonging to the late Sam O’Donnell on a trailer which we used to promote the use of smoke alarms.

We had a smoke machine going for effect and a fireman inside in a breathing apparatus. We only got as far as the Four Lights on the Port Road when we had a fifth light when the curtains on our house caught fire.

The crowds thought our float was very realistic and they were right it was a real house fire before the set of curtains were quickly pulled off the window and stamped out. I’m not sure if that was the same year old hat a brass band from Ballymena were behind us going down Letterkenny Main Steet. When they got to Dunne’s Stored at the foot of the town the trumpet player called over to us in his best Antrim accent.

‘Hey boys, do youse not know any other tune other than that one – Nee Nah, Nee Nah, Nee Nah!’  referring to the two tone horns on the fire engine we were blowing heading down the Main Street.