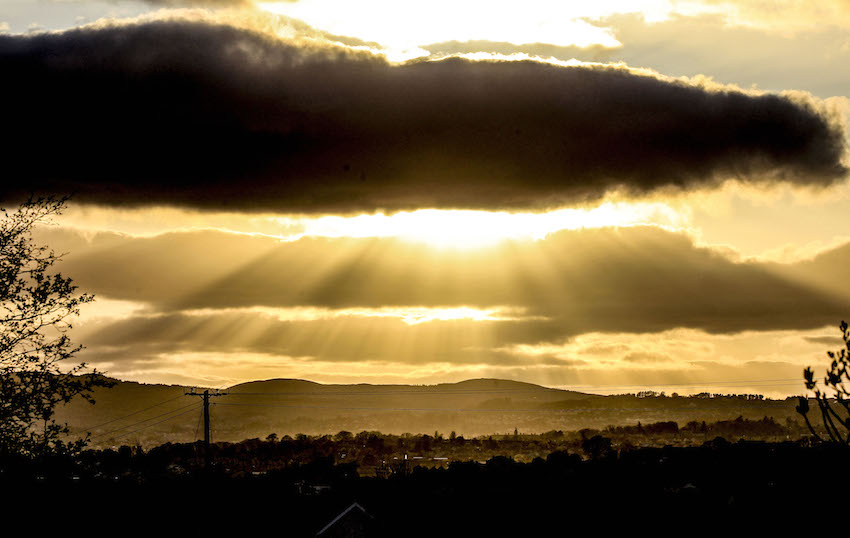 A wave said it all, it sent a signal to say we’re back and out on the road again. It was a friend that waved joyfully with the two hands out the passenger window with their spouse driving. I nearly missed them not recognising their car.

Their family car sat up for nearly a year. Both went through a rough time with Covid. Their were days when I was afraid to ask how things were in case they had got worse.

On Saturday evening it was a joy to see the husband and wife on the road to recovery again. Expressions like this will soon dissolve as we get back to something very normal, meeting people for the first time in a long time. Coming through a journey of uncertainty, of illness, of isolations of worry of loss for some and of slow recovery for others.

Back on the road

It’s been a long wait, and hard to believe that we’re into our fourth month of lockdown but it was a spirit-lifting day if not a little nervous day to be back on the road. The sets of flashing blue lights of checkpoints are gone from the roads in the meantime.

Before the restrictions lifted I noticed the mileage on my van heading to show all the sixes on the clock. For over a year now we went from looking at numbers every day as the pandemic started to get a grip, to dread that 6 o’clock in lockdown when you just got fed up watching the telly and ended up not wanting to know anything about Covid numbers waiting and waiting for the vaccine to come our way. 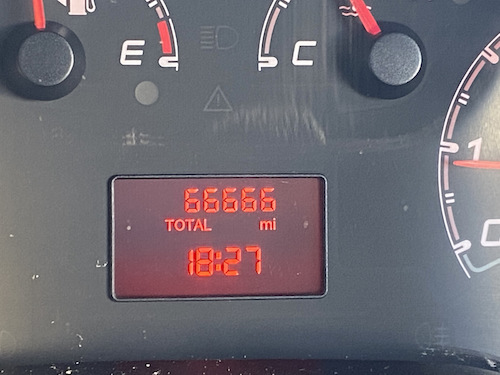 All the 6’s on the clock enjoying watch numbers going up of a different kind for a change . Photo Brian McDaid.

At 66,661 on the clock, it was the first time in a long time I was looking forward to seeing a number increase as I did another lap of Letterkenny and watched all the 66,666 coming into view.

Watching them line up made me think of my father taking us away for a run one evening in the lorry he was driving for the ESB in the seventies. He was stationed in Malin which doubled up for our summer holidays for a full seven weeks in Lnishowen living in a small caravan in the sand-don at the Five Finger strand at Lagg.

It was in the town-land of Umgal between Lagg and Malin Head in Inishowen that KIH 459 his lorry turned the clock going back to all the zeros as it and turned 100,000 miles. In those days it just went back to all zeros as there was only room for 99,999 miles. My father was very proud with us all on board as he drove towards Malin Head that evening.

A week ago on Wednesday past a job requested required a trip outside the 5km restriction that we lived in since January. This journey took me back to a very special part of Donegal on a beautiful evening. The only summer holiday I ever remember going on when both parents were living was too Clonmany. Daddy was stationed there with the ESB in the summer of 67. I can only remember the two of us wanes in the back of a small Standard 10 car making the journey on our holidays sitting so high in the back of the car on top of all our luggage that our heads were hitting the roof.

A view of the beaches and coast lines near Clonmany bringing back memories of Summer Holidays from many years ago Photo Brian McDaid.

The house we stayed in is still there, a bungalow next door to what now is a Centra shop. Its two bay-view windows may have had its windows replaced but the shape of it as I remember them is still the same. The house had two separate small rooms one for bath and one for the toilet beside each other, which all looked very posh. That year my father got a new ESB van, an Anglia which I spent what seemed like hours playing in until one day there was a very heavy thunder plump of a shower of rain which sounded ten times worse battering of the roof and side panels of the van. It only lasted for less than a minute but it seemed longer sitting there as a child waiting for it to pass over. I was in tears when the shower ended and made the dash from the van sitting in a wee driveway to the safety of the house where my mother and father tried to look serious at a small boy caught in a rainstorm in an ESB van in tears.

Last week in Inishowen I got the bit of work done and took a slow spin up the Main Street in Clonmany looking at old shops that have now closed up.

It’s a long enough Main Street but seemed longer walking along the side of a pram with my mother back in those days, and days that we headed off to the nearby beach. I take a last look in the window of what was our home that summer and smile, Clonmany has done it again, just like an old book our a photo you thought you had lost or that someone had dumped, it was there all the time, just where you had left it in your memory.

I stopped off in Buncrana in Tommy’s takeaway on the way home. It proudly has a sign above the door saying the company was established in the 70’s but the thought crosses my mind that I’m retracing my tracks from the decade before that in the 60s. It’s across from where the old ESB shop and offices were. The old mast for the communication system for ESB two-way radios in their vans and trucks are now loaded down with transmitters for mobile phone network, Heading out of Buncrana, Fahan and Lough Swilly are stunning as the sun shines on the beach and the water along the road.

As I turn right into the Slab Road I search for a song on my phone, back in our journey there we had no radio in our wee Standard 10 car, we made our own music, the song we sang going through here was ‘Old McDonald’ who just happened to be the name of the man that owned the farm in the reclaimed flatlands at the time. My mother would lead the song and we would jump in with E-I-E-I-O. Or a moo moo here , or a quack- quack there, I belted out a few “Moo-Moo Here” like a big wane last week as I kept in step with Spotify on the road through.

Right back where we started from 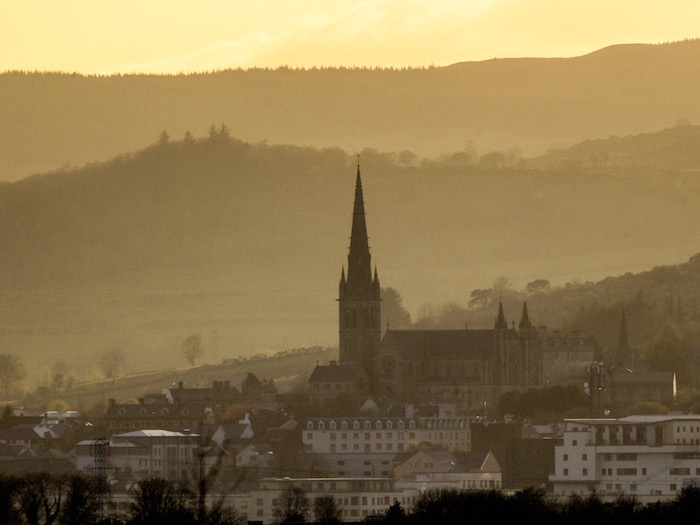 Letterkenny and St. Eunans coming into view as the sun sets and the sign of summer and better days arrive. Photo Brian McDaid.

On the highest point of the inbound lane of the dual carriageway as you round the corner, Letterkenny comes into view, it was always the time that my mother would start singing her modified version of “California here we come”, replacing that far off location with Letterkenny, that made the song feel it was made just for our return journey from our holiday in the 60s from Clonmany.

I exited the dual carriage way half way up it and pulled up to the old road which runs parallel and drove along it untilLetterkenny came into view. It’s St. Eunans Cathedral you see, and the hills of Kirkistown and Glenswilly in the background that never have changed sun going down in a sunny evening, a trip away for a while and they are there, always there to welcome you back.

As I went to get back in the van a cloud that was blocking the sun sent rays of evening sunshine over Letterkenny. I could have moved to take the pole and the ESB wires out of the shot but those ESB poles are as much a part of my memories and their cross-arms as the sun is setting on my return to Letterkenny. As quick as it was there it was gone, the dark cloud passed, were out the other side, this is the new normal.