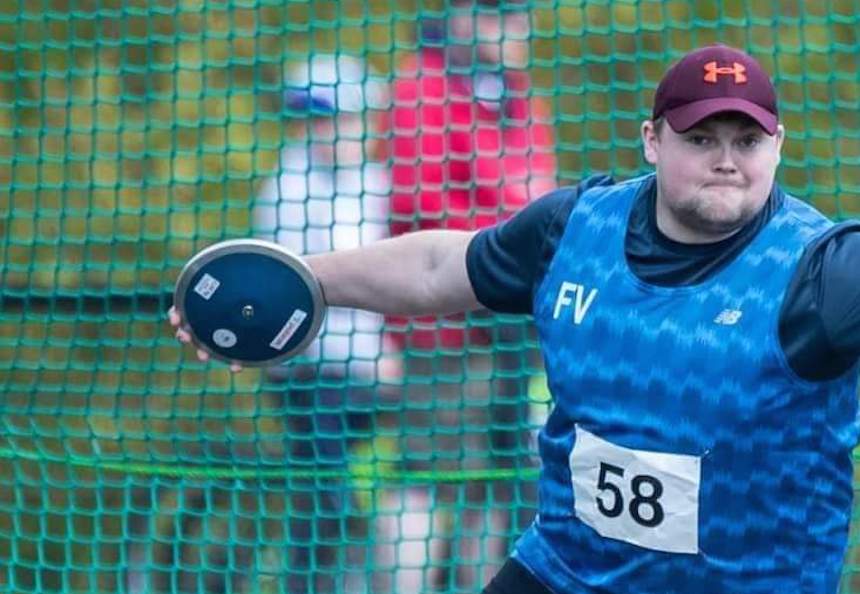 GAVIN McLaughlin put two metres onto the Donegal discus record yesterday – and is already aiming to take down his next barrier.

The Finn Valley AC man (pictured above by Bob Given) threw 46.53 metres at the Antrim Forum and it was one of two Donegal records broken on the day with Lifford-Strabane’s Ellie McCurdy taking a new senior women’s javelin mark.

That effort bested his own previous record of 44.36m, set at Finn Valley in September 2020.

McLaughlin was the comfortable gold medalist, but is eyeing up further marks.

“I want to close in on 50m for the discus and that’s my goal now,” McLaughlin told.

McLaughlin, from Ruskey in Convoy, is coached by John Kelly and he also set a new shot put personal best yesterday, reaching out to 16.52m in an event won by James Kelly’s 16.62m.

McLaughlin said: “I have two weeks now until the National Seniors so I’ll get the head down now to prepare for them.

“Hopefully myself and James can get a one-two in the shot and i’ll just see how far I can push myself now in the discus.”

McLaughlin started throwing aged 12 when he saw John Kelly in action at Finn Valley one night.

“I just said to myself: ‘That’s a bit of me, there. I asked for a wee go and I’ve been at it since. I got very interested in it again in January 2020. I was getting big in the gym and throwing more and I could see the gains happening so I’m just eager now to keep going.”

McCurdy, of Lifford-Strabane AC, won the senior women’s javelin, landing her best effort to 36.49m. McCurdy’s throw added 65cm to the 1995 effort of Sharon Foley, whose record has stood since the moment the point entered the grass in Derry 26 years ago.

McCurdy, who works under coach Damien Crawford, is now the new woman on that stage.

In the senior women’s Hammer, the silver and bronze went to Lifford-Strabane, with Una O’Donnell (34.15m) and Cora Burns (32.64m).