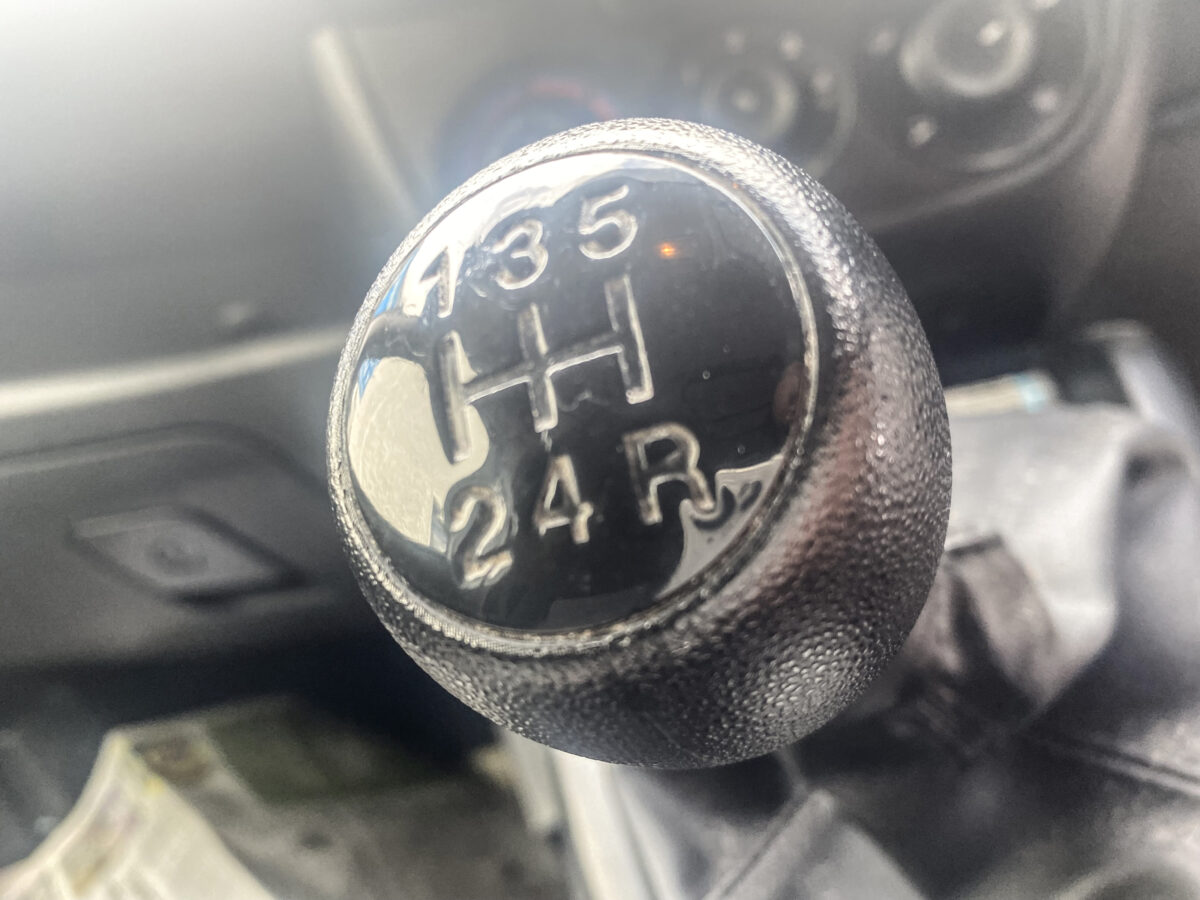 Motoring Columnist Brian McDaid looks at the rise in popularity of automatic cars and what the future holds for manuals.

I’m halfway round the roundabout and the car has started a fit of jumping before it finally dies out.

I’m still moving but the steering has now become very heavy, you’re supposed to merge into a roundabout, this is not very graceful as I quickly try to restart the engine as I receive a few angry toots on the horn from an impatient road user.

This always happens to me after I spend just a few days behind the wheel of a car with an automatic gearbox, I forget that I have to clutch going into a roundabout and as I go to brake the engine is still connected to the drive of the engine so the engine dies out. Every time that this happens I swear to myself that my next car I get is going to be an automatic, and then the notion leaves you until the next time you drive something with an automatic and realise how good and relaxing and effortless they are to drive. 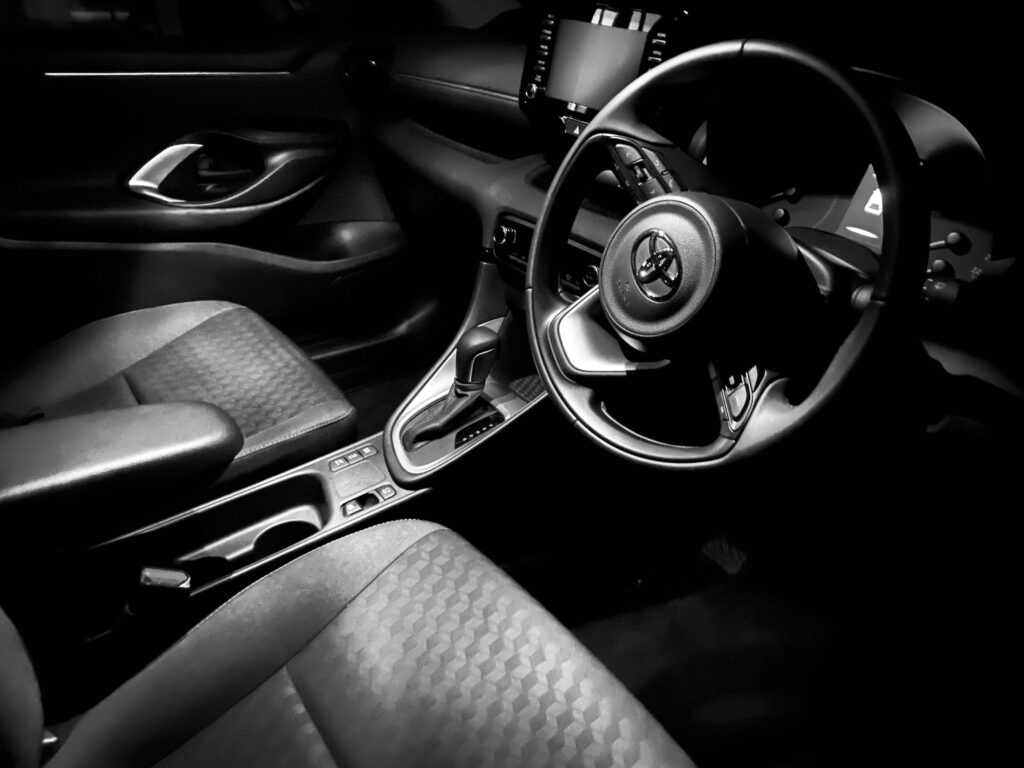 The interior of our new Toyota Yaris complete with automatic transmission showing a great driving position with the least amount of effort. Photo Brian Mc Daid.

I have two opposing views of automatics. Of two different types:

The first was that of my late uncle Hughie who was a transport manager by profession with the Donegal Oil Company. Just mention that you were thinking about buying an automatic and a worried expression would come across his face. “What do you want an automatic for sir” would be the question he would pose as he would listen to your reasons for giving up the joy of perfect gear changes up and down a gearbox, maybe double de clutch in there heading into a hill in an oil lorry.

Hughie would always recap the first automatic that he ever drove on some big luxury car, which he felt was very slow, and very sore on petrol. Hughie was the type of driver that would be listening for the engine labouring in the wrong gear, who just knew when it was the right time to change up or down a gear. Always looking at the road ahead, getting a bit of speed up before coming into a hill. Hughie always prided himself for being in the right gear at the right time, in anything that he drove – from an old Leyland eight wheeler oil lorry right through to a taxi that he drove for over 20 years. I remember having a yarn with Hughie out the car window a few years that I was driving, it was automatic and reflecting now I should have asked him to go for a spin to see what he thought of it, how these new automatics had progressed from his experience of them many years before that. 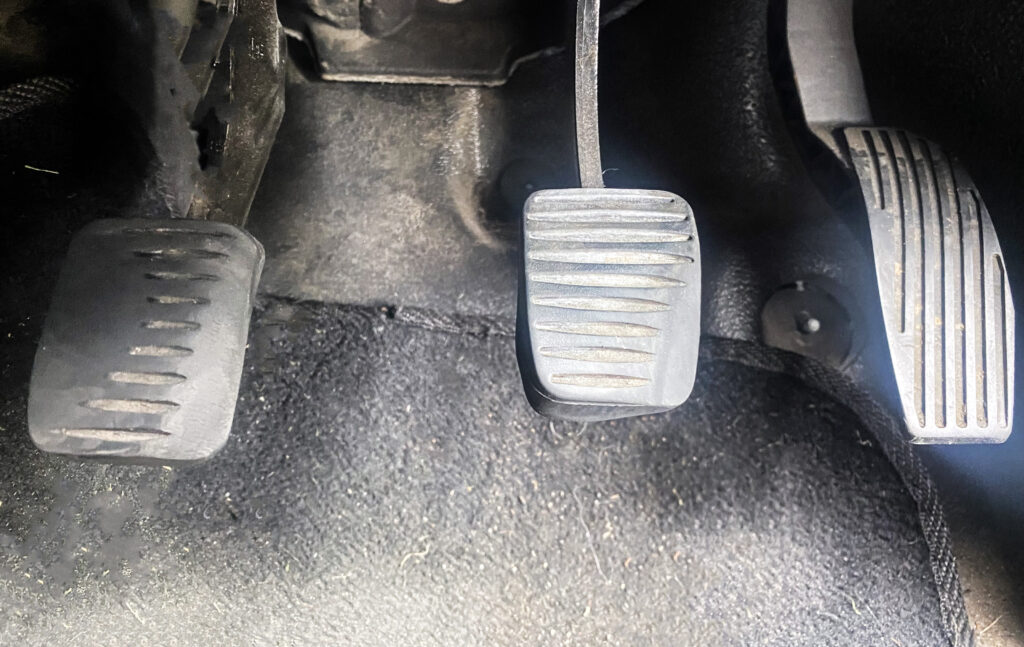 the clutch, the brake and the throttle – three pedals that are a familiar site to most drivers. Photo Brian McDaid.

The second story is of a friend who had a different connection with the gears on the vehicle he drove.

I can sum this up with a story from the day that both himself and myself headed to look at a new motor for him in the old motor he drove for 8 years. On a straight section of road I could hear the engine revving a bit too much and after a while I suggested to him would he not change into top gear, “top gear” he replied , “sure I’m in top”, nah you’re in 5th , “aye 5th he replied , that’s top”.

“What about 6th,” I suggested pointing to the small diagram on the top of the gearstick.

He looked down at the gear stick, glanced over at me and said “are you sure about this”! Before he pulled the gear stick into the final gear, there was in 6th a gear a gear that he never used once to the final day he was trading in his old vehicle, his new purchase had a real 5 speed gearbox which he was annoyed about initially saying he had only learned about having six gear that morning now he was going to have to live without it on the new motor.

Thinking back this driver would be a great candidate for an automatic, never having to worry about missing sixth gear that he never used when he had it. 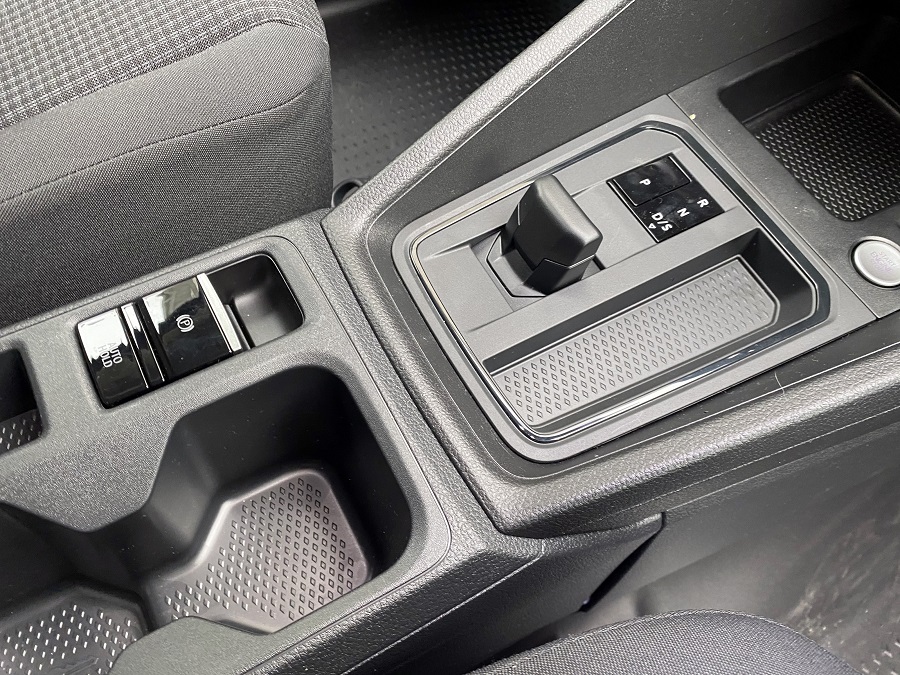 The automatic transmission controls which was an option pictured with the push button handbook which is standard on the new Caddy. Photo Brian McDaid.

Mention an automatic and it’s amazing how automatic experts will throw a cog of thought into the mix.

One of the biggest problems with automatic gearboxes is public opinion that they attract which is based mostly on second hand information handed down for years when automatics were considered to be only for a big bruit of a car that was slow, sore in juice and lacking in drivers input.

The positives of automatics is that they have progressed so much over the years with a variety of different versions by car makers producing the one end result, and that is one less thing that you need to worry about when you get behind the wheel.

I had a conversation with a driving instructor recently and he said it would surprise you how many young drivers are deciding to go for an automatic car even after they successfully passed their test in a manual one.

A typical automatic transmission set up with no clutch pedal and small switch where the gear stick one was. Photo Brian McDaid.

In my time you would have prided yourself in how well you could operate the more manual part of driving, from taking off , hill starts and gear changes. That was then and now it is not that big of a deal, it was not that long ago we were in dial up tone with IP address and that tone for every number as it dialled up to make your network connection. Now your phone will do all of that automatically, once you give it the permission.

In a few years it will be the norm to have automatics in our cars with the big numbers of hybrid and electric cars coming on stream, and requesting a manual gearbox on a car could soon become a limited option.