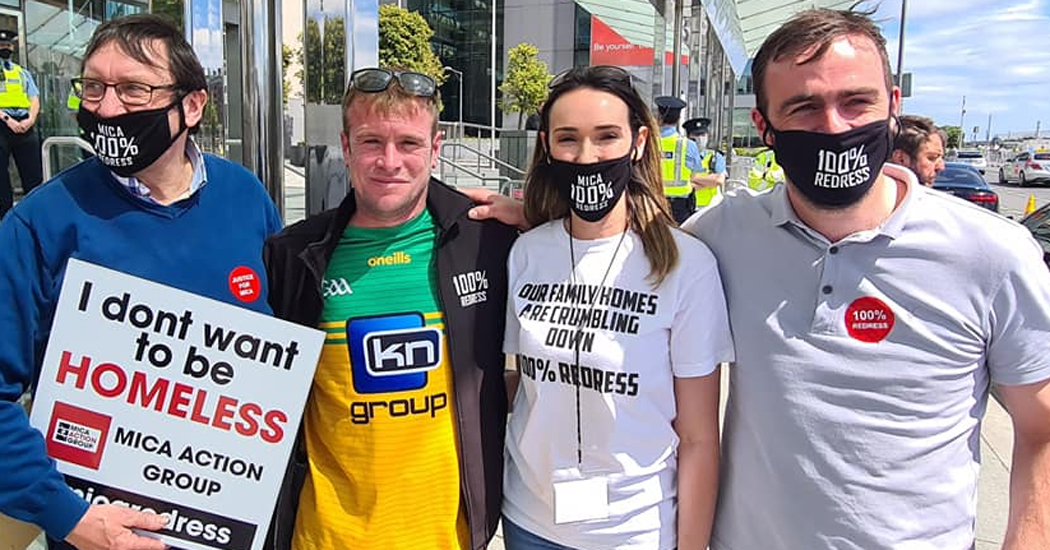 After a special meeting on the Mica crisis, Donegal County Councillors remain united in fighting for 100% redress for homeowners.

The search for answers will follow in the form of a public inquiry, members agreed today.

A public inquiry, Cathaoirleach Jack Murray said, “is the only way to get to the full truth into how this has happened, at every stage from the blockmakers to the quarries to the local authority, to people who authored and implemented the legislation under which all of this has happened.”

“The only thing that will bring lasting comfort to the people affected by Mica is 100% Redress. Nothing else will ensure a roof over their heads under which their children can sleep knowing that they are safe,” Cllr Murray said.

Cllr Marie Therese Gallagher said that the public inquiry pursuit will be separate to the fight for redress. The council now, she said, needs to get responsible on behalf of homeowners.

“The whole scandal needs to be addressed by putting people first,” Cllr Gallagher told the meeting.

Councillors today made clear that 100% Redress is the only option on the table. Many expressed disappointment that no members of the council’s Mica Redress Committee were invited onto the government’s Defective Blocks Working Group.

The working group, Cllr Gary Doherty said is “the only show in town”

“We are all putting our hope that we will get a resolution of 100% redress from that.”

A tribunal is required to expose the truth of the mica scandal, Cllr Doherty said, “whether that truth is palatable or not to those in power.”

“This council, specifically the elected members of this council, has no role to play as judge, jury or executioner, but as public representatives we have a duty to get to the truth.

“What we are lacking at the moment is full transparency for these poor people, they feel they are not getting the answers to questions.”

Cllr Gerry McMonagle said: “Recriminations, I think, will come from a public inquiry, that should happen, but in the short term, after we get 100% redress and we start fixing houses, where are we going to put them? We need to be doing the practical stuff to help and assist families in their nightmare that they are in.”

Cllr Gary Doherty posed questions to the council on what testing was carried out in the principal quarry since mica came to light. He asked what action did the council take on receipt of the expert panel report on the offending quarry and supplier and he asked how was it that planning extensions were granted on quarries where it was known that Mica was present and actively infecting blocks and buildings.

A separate question was posed by Cllr Frank McBrearty seeking updates on legal action against quarry owners. In response, the council said one legal case has been ongoing for a considerable period of time.

“We are in the hands of the court here. We are due in the court again next week on this one,” said Mr Liam Ward, Director of Services.

Mr Ward said it would not be appropriate to get into the detail of the case because it is an ongoing enforcement matter before the courts.

Today’s meeting was called by Cathaoirleach Jack Murray in the interest of demonstrating openness and transparency of the council.

As an example, the council committed to provide written answers to all councillors’ questions raised. The responses will be published online in due course.