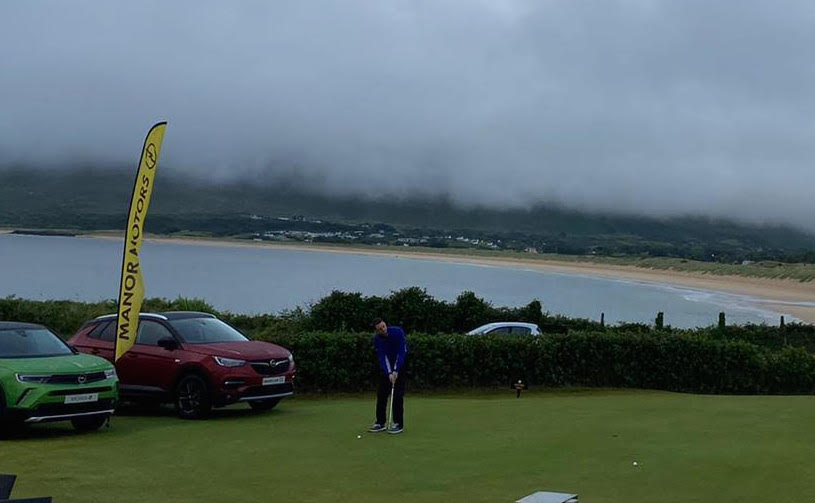 The Letterkenny man was, of course, retaining the title he won 12 months ago, and he started off in relatively low-key fashion with six straight pars before notching his opening birdie at the seventh. The ledger was balanced with a bogey at nine that saw him turning in level par.

Soon after the fireworks came on. He went under par via a birdie on the par-five 11th hole and after negotiating a tricky pin on 12, another gain was made at the short par-four 13th to move two-under par.

Pars followed on the 14th and 15th before a hat-trick of closing birdies on the 16th, 17th and 18th saw him signing for a magnificent tally of 67 blows and a new course record on the famous Fanad Links.

A more than fitting way to win any Scratch Cup and, from all at Portsalon, our congratulations to Cian on a majestic round of golf – continuing his exceptional play this summer and overall golfing development as a player equally capable on links tracks and parkland at his home club in Letterkenny.

Runner-up on the day was Jamie Foley (1) with a very creditable level par 72 while the bronze medal went the way of Sean Duffy (2) with one strike more on 73.

The nett section in the Scratch Cup was won by Martin Scullion (1) with a 70, edging out Mark Howard (9) on a break-of-tie with Pascal Cullen (6) on shot behind.

The Intermediate event was won by Michael Shiel (12) with a gross score of 80, gaining the verdict on a break-of-tie from Patrick Logue (12) with David Bonner (10) taking third spot in 82 shots.

The nett winner in the Intermediate section was Stuart Nicholl (18) with a score of 67, a couple clear of Kieran O’Neill (15) on 69, while third place went to Ronan McClafferty (13) with a 71 nett.

Our thanks once more to Manor Motors Opel for their generous sponsorship of the Portsalon Scratch Cup event this year.