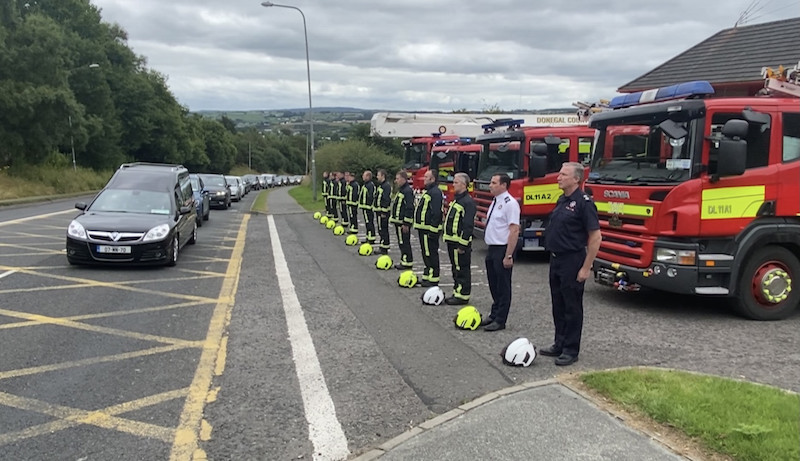 It’s only families that have someone on emergency call that know what it’s like to take no planned journeys for granted.

From the moment when the call will come in and no matter what or where you’re going when the pager goes or the old siren filled the town plans were put on hold and a car was turned around as you rushed to the fire station to answer the call.

Even at the funeral of former fireman with the Letterkenny Fire Brigade the family of the late Liam McGrath were reminded on Tuesday morning what it was like when Liam was on call.

A unit of the Letterkenny Fire Services (Juliet 3) which was detailed to take one of its former firefighters and lead it in its final journey escorted Liam’s remains from his home at 122 Upper Ard O’Donnell where the family walked the short distance to the nearby St Eunans Cathedral. 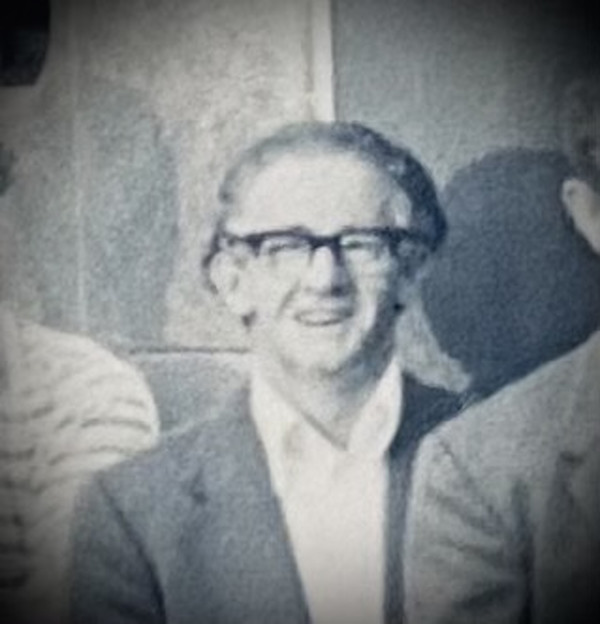 Liam in his younger days on duty with Letterkenny Fire Service.

And just as the funeral mass began a call came in outside requesting the assistance of Juliet 3 and fire personnel present to attend an emergency call and as Liam would have done in his years on call planned journeys or events were put on hold until the call was answered.

In Liam’s day the word FIRE printed in red attached to the underside of a sun-visor was flipped forward against the windscreen, headlights on as Liam would head across the Burma and up the High Rd to answer the call, just like at his funeral fire appliance dong the planned guard of honour. had to do on Tuesday afternoon.

For the retired members of the Letterkenny Fire service who remembered their colleague with a guard of honour at the gates of St Eunans Cathedral it reminded them all what it was like when they were on call 24-7.

It’s been a difficult week in Letterkenny for families of fire service personnel as it is the second retired member of the Letterkenny Fire Brigade to pass away in just 10 days. 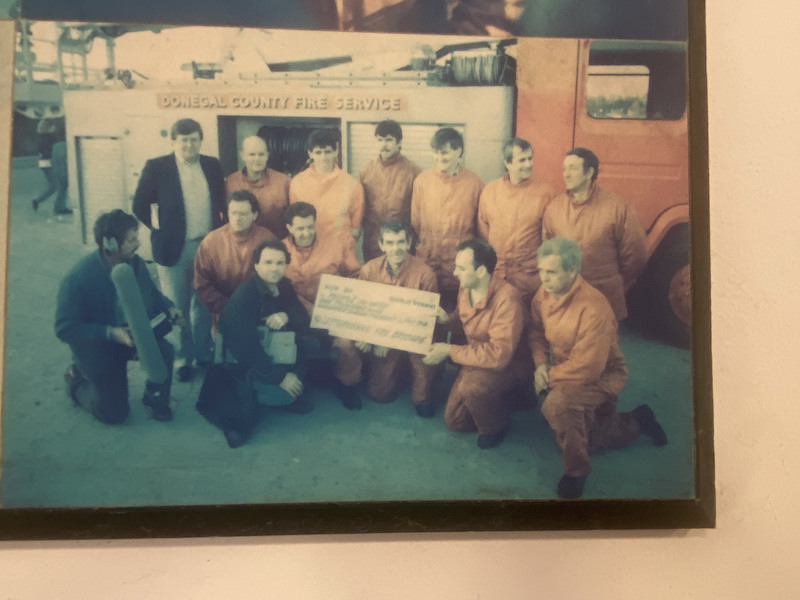 The Late Tommy Friel on the right at the back with the crew that he served with at Letterkenny Fire Station.

The late Tommy Friel was laid to rest on the first day of august that day Juliet one was on duty which led his way passing by the new fire station to a guard of honour on his final journey and on Tuesday Liam Mc Grath joined Tommy in that same final journey.

The two men both worked together in an era when Letterkenny was a different place where people would regularly hear the siren blowing on the High Road. A place where a family of firefighters could be going on short spins to the beach and could end up sitting parked at the fire station door when the siren would call. They would wait until the call was dealt with before their own life could continue. 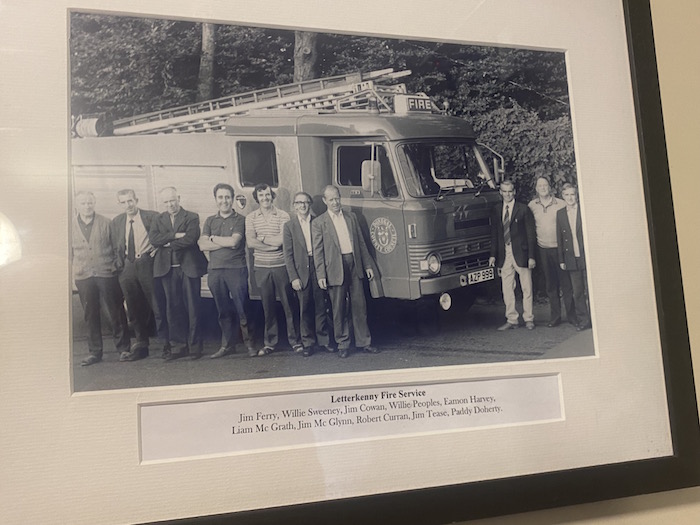 Liam Mc Grath pictured centre with the crew that he served with on the Letterkenny Firebrigade.

In those days, Wolfe Tone Place and the Burma (Ard O’Donnell) housed the biggest majority of the Fire Service. The Burma included the Whites, Tommy and his son Ronnie , the Curran’s Bobby his son’s Eddie and Sean and Bobby’s brother Paddy, Jim and Danny McGlynn, Willie Sweeney, Danny Grieve and Liam McGrath and where the late Tommy Friel once lived in Wolfe Tone Place there was six firefighters answering the call over the years including Jim Tease, Jim Ferry, Kevin McGlynn, Tony Coyle, Tommy Friel and Brian McDaid.

Over these last few weeks, members of Tommy Friel’s family including his wife Noreen, his children Lillian, Thomas, Edwina, Helen and the twins Eamon and Desmond and extended family were comforted as best as they could in these restricting times. And this week it was Liam’s , family including sons Kieran and Liam, daughters, Deirdre, Yvonne and Bridgeen, and Liam’s sister Mamie Doran, Wolfe Tone Place 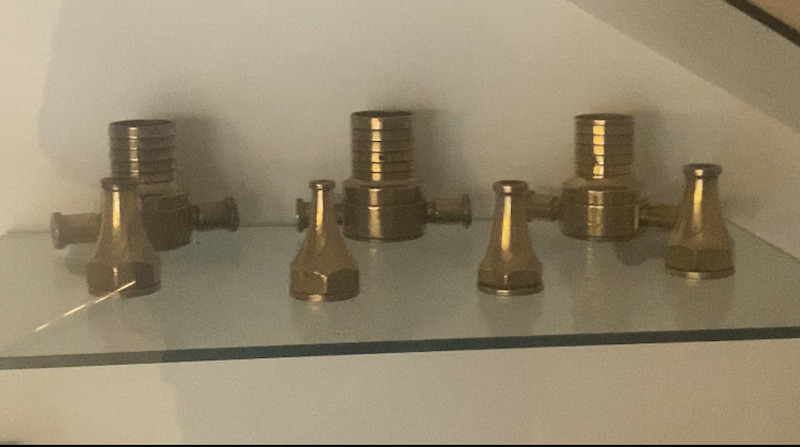 PPE (personal protective equipment) is a new term to most in the present fight against the pandemic for Tommy and Liam in their days in the fire services there was the very basic form of PPE. Also called fire gear, old yellow waterproof leggings where standard basic issue compared to the technology of the fire gear of today but it never stopped these old school firefighters when the call came in, some of the old brass branches and standpipes that Tommy and Liam would have used back in the day were kept and are housed behind glass at the new fire station polished up to a beautiful shine but also showing the years of use getting water from hydrants to fire engines and on to the fire. 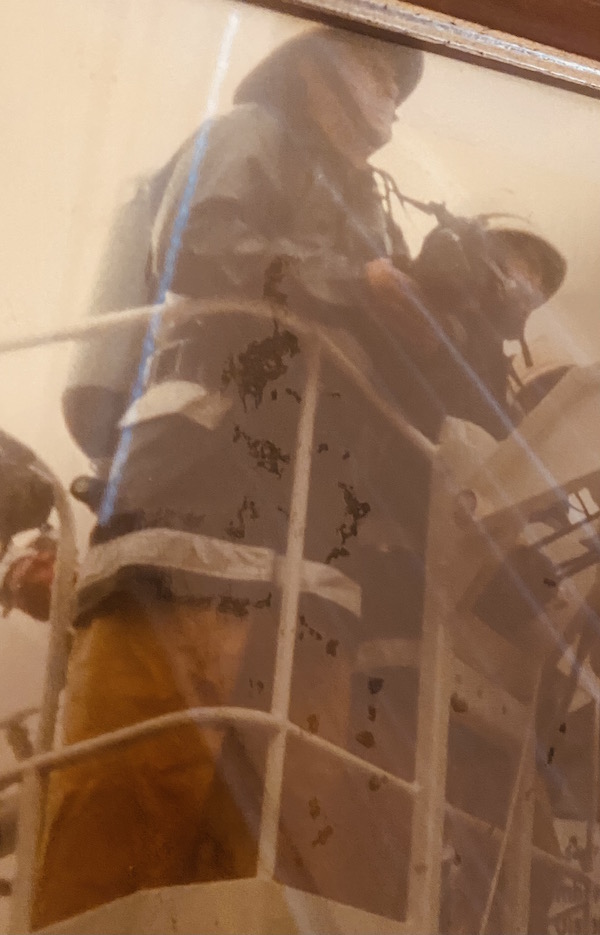 The Late Tommy Friel on duty with the Letterkenny Fire Service

On Liam McGrath’s last journey on Tuesday morning, the Fire Brigade in Letterkenny that he once served with were called away from his own funeral at St Eunans Cathedral to an emergency call, a perfect reflection of how things go when you’re on call.

Incidentally, the same thing happened a few years ago at a fellow firefighters funeral of the late Eddie Curran when the bleeps went off in the Cathedral in the middle of his funeral mass and fellow firefighters had to leave to answer the call. For a moment at both their funerals the fire service called Liam and Eddie one last time.

As the memory of bleeps and sirens from the old fire station faded as
Liam made his way down Letterkenny Main Street for one last time as his funeral chimes rolled into the Angelus bells at twelve midday. Liam had made this journey to Conwal regularly over these last few years to visit his beloved wife Brid’s final resting place in Conwal. This week they were together again as Liam answered his final call to travel his final journey to be with Brid together again. 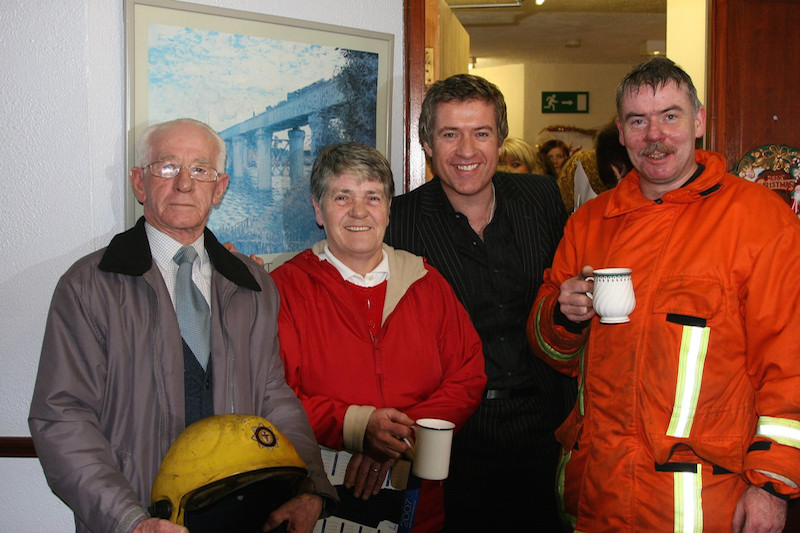