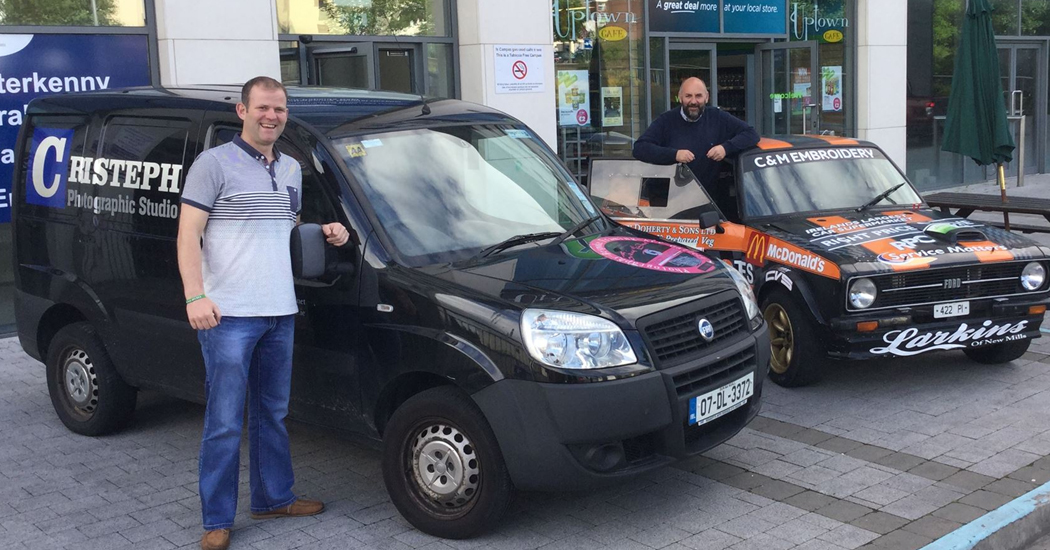 DD Motoring: More than a number

Fully appreciating the need for this to happen, I think in the future the help that photography did in recording and helping in dating local history in the past will be missing a vital link in the future.

Part of the self made calendar I use throughout my life is based around who had what car when and what was it number plate.

It will give me an idea of what year was what year measured in time by the cars of the people around me when I was growing up.

Some numbers I had off by heart, HIH 866 and KIH 459, my father’s old grey Anglia Estate and the ESB lorry he drove, HIH 281, my grandfather’s old red Opel Kadette all numbers I would always be glad to see, and even both my father and grandfather have long since passed on. 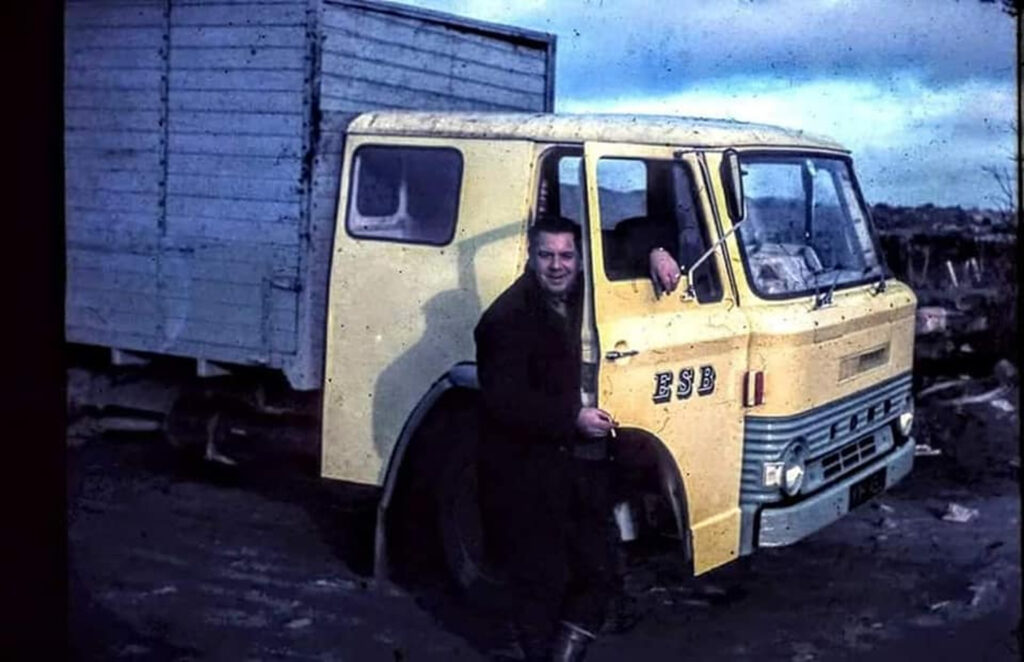 My Father and his old Ford ESB truck KIH 459

I now work on the back road in Letterkenny years on and there are days when the sound and way a careful truck driver will ease his lorry into the hill outside my window, the sound of the engine pulling up the hill, makes me want to look out and see my father’s old ESB lorry pull up momentarily on the Back Road like it did years ago so that us as children can quickly pile into it to get a lift up home.

This is the number plate of a van that I have never seen. It was in my family long before I was ever born.

The stories of great adventures were told over cups of tea and how it was used by my grandfather to sell clothes door to door after he retired from Irish Shell and BP back in1948. Then on weekends it doubled up as the family car as old wooden mineral boxes were turned upside down and used as seats in the back and the family would head down to Cork to see their son Nelius (Fr.Mark) who was going on for the priesthood. And old black and white photos of this van painted the picture in my mind that it was a lovely black van. 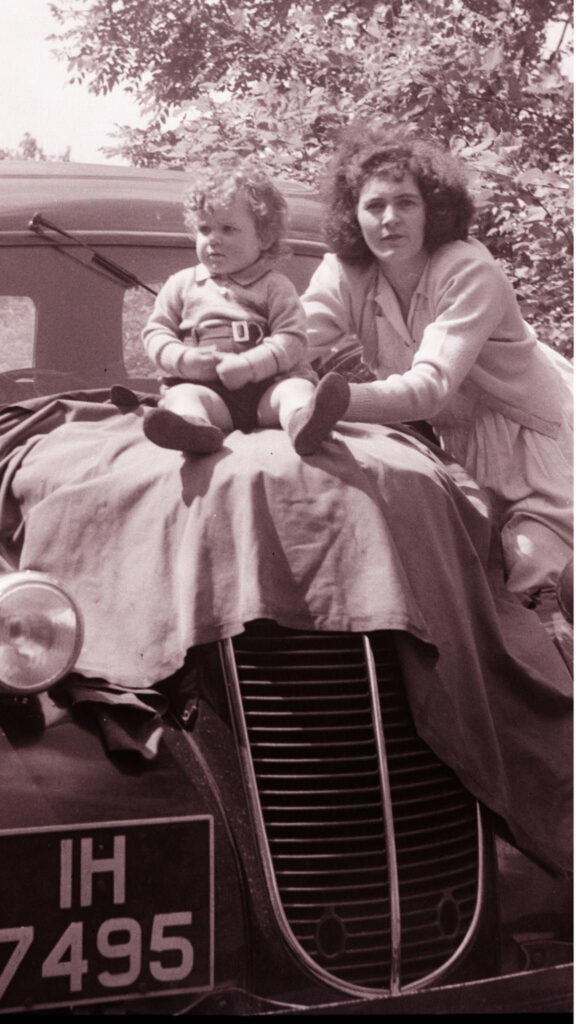 My grandfather’s Ford van IH 7495 pictured in County Kerry with my aunt Rosaleen and one of her children (Seamus or Billy) sitting the bonnet.

But a conversation with my Auntie Bida years ago when I changed my car and called down to show it to her and when she was blessing it with holy water outside her front door in the Back Road, she said, “Do you know this, that wine colour of your new car is the exact same colour of your grandfather’s van”.

Passing on that detail of the colour of something from an old black and white photo gives you the possibility of imagining what colours everything else could have been in old family photos.

This is a number plate I never seem to forget, mind you when I first seen the vehicle it was going too fast for me to even see its number plate. In fact I never seen it in real life on the car, it was just only in photographs after the Donegal International Rally of 1978. In the limited amount of coverage that motorsport got back then that built this memory of an amazing weekend in June over 40 years ago. 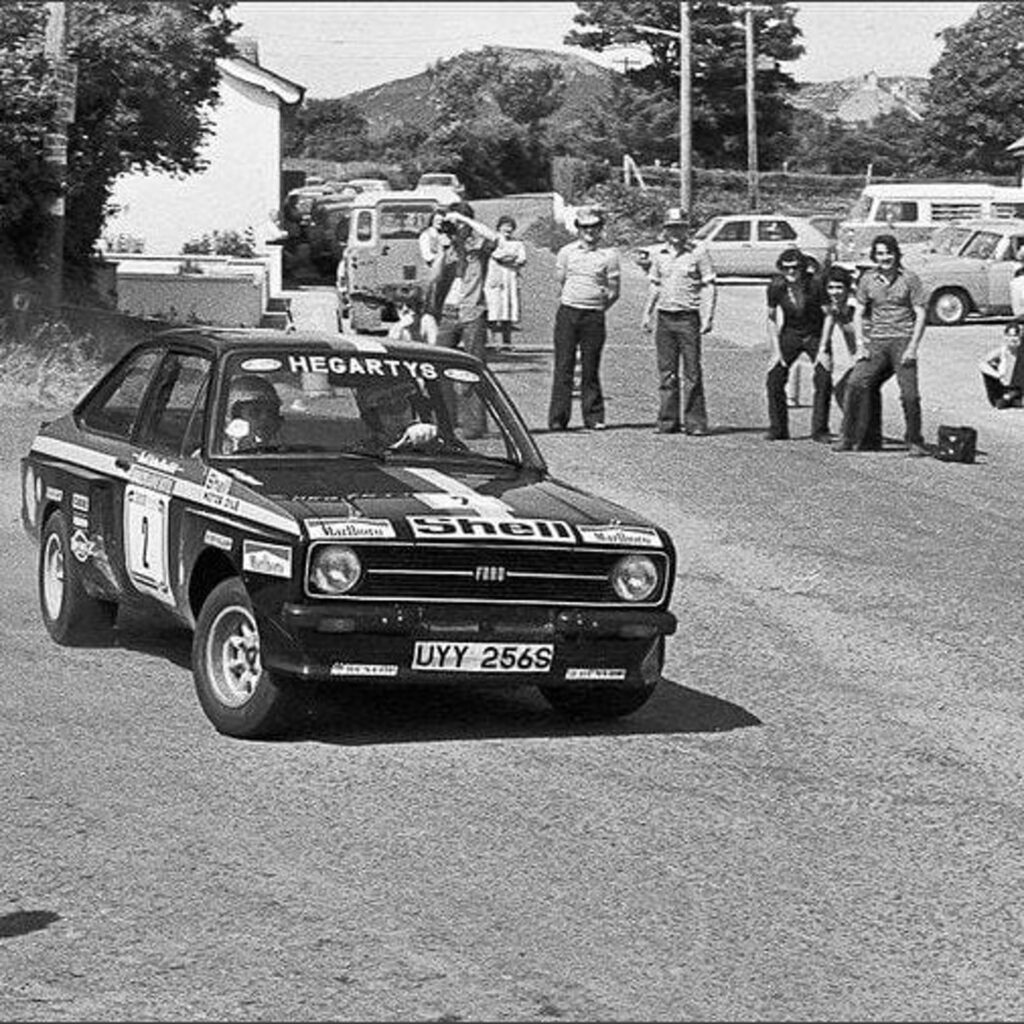 Ari Vatenan powering his way through Donegal in UYY 256S

There was a bit of serendipity in the local story of the registration of this car, that will not come up in a google search. It was one of David Sutton’s famous RS1800 of the seventies that came to Donegal in that decade and won the event. (I think the 1979 winning escort if Brian Nelsons better known as the Tuca Tile escort was also from the same Sutton stable, but I could be wrong.)

UYY 256S arrived in 1978 to compete in the Donegal Rally that year. The S at the end of the registration would suggest that the car was brand new for that year’s Donegal rally. The 256 in the number plate just happened to be the same order that the old three digit phone number of local sponsor for this works escort that year Hegarty’s Auto Service in Ballymacool, “phone Letterkenny 256” as the adds would say.

UYY 256S was the number plate for Ari Vatenan’s escort which graced a June weekend in Donegal for the young Flying Finn and his Co-driver Peter Bryant. Donegal always got the best that was about competing, but this young fair haired Finn just moved the bar that notch higher with his flamboyant and very fast style of driving. For a young spectator out watching the Donegal rally for the very first year this car and its number plate and that Donegal rally has always been the rally to remember. Even years after the black escort was changed from its Xpack type arches and painted in the Rothmans team colours that old Registration was still there to track its progress.

The most recent number plate that I often think about is that of an other black escort that I photographed many times over one weekend in June in 2015. 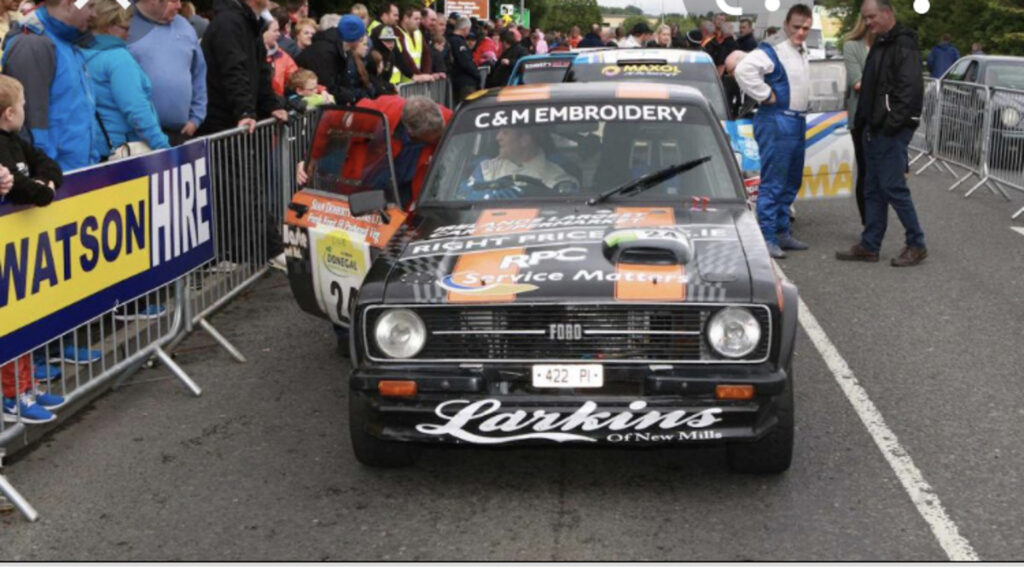 Manus Kelly at the finishing ramp of the 2015 Donegal Rally with 422 PI. Photo Brian McDaid

422 PI which went on to win the National section of Donegal that year in the hands of the late Manus Kelly. It has one of those journeys, “PI” was just one of the many modified cars that came to Donegal that year competed with the cream of rallying and came out on top, I remember looking at it after the Donegal rally when Manus took it to Glenswilly National School the week after he won the National, and I’m sure like me growing up some of them young children will remember the registration of that memory from their childhood.

Ari Vatenan car was new the year he came to Donegal in 1978 the same year the late Manus Kelly was born, 422 PI was an old MK 2 Ford, registered down the country but  created the same passion when Manus Kelly sat behind the wheel in 2015 and steered her home with Donall Barrett on the notes to a national victory. 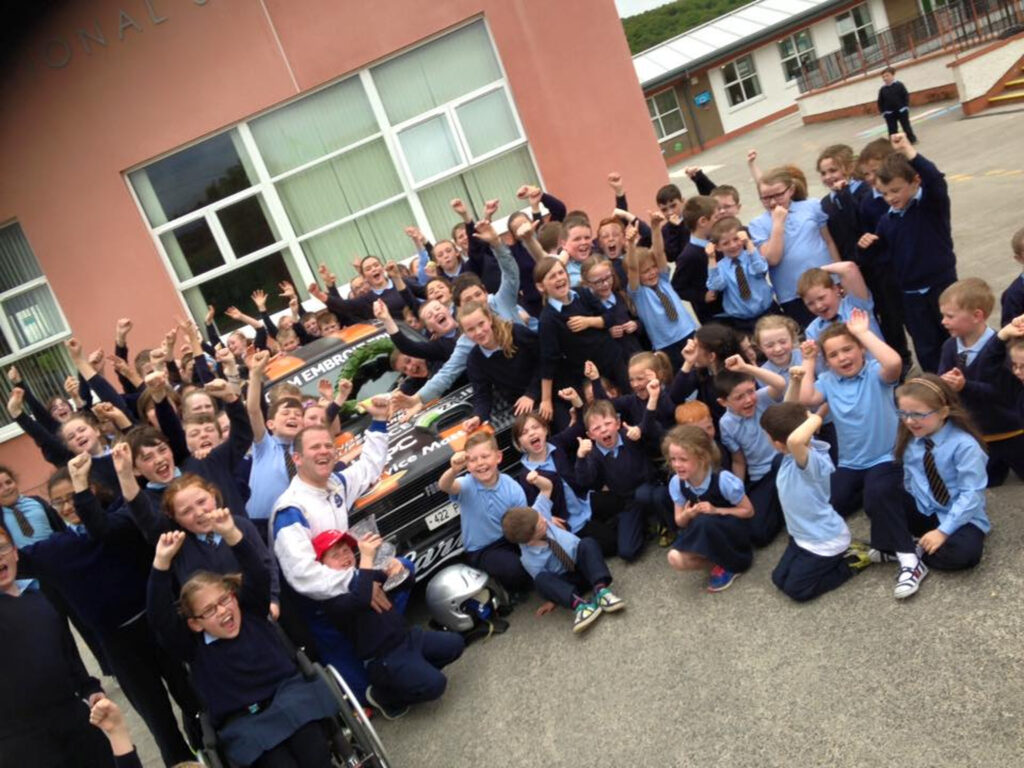 Manus Kelly and 422 PI at Glenswilly National School the year he won the National in the Donegal. 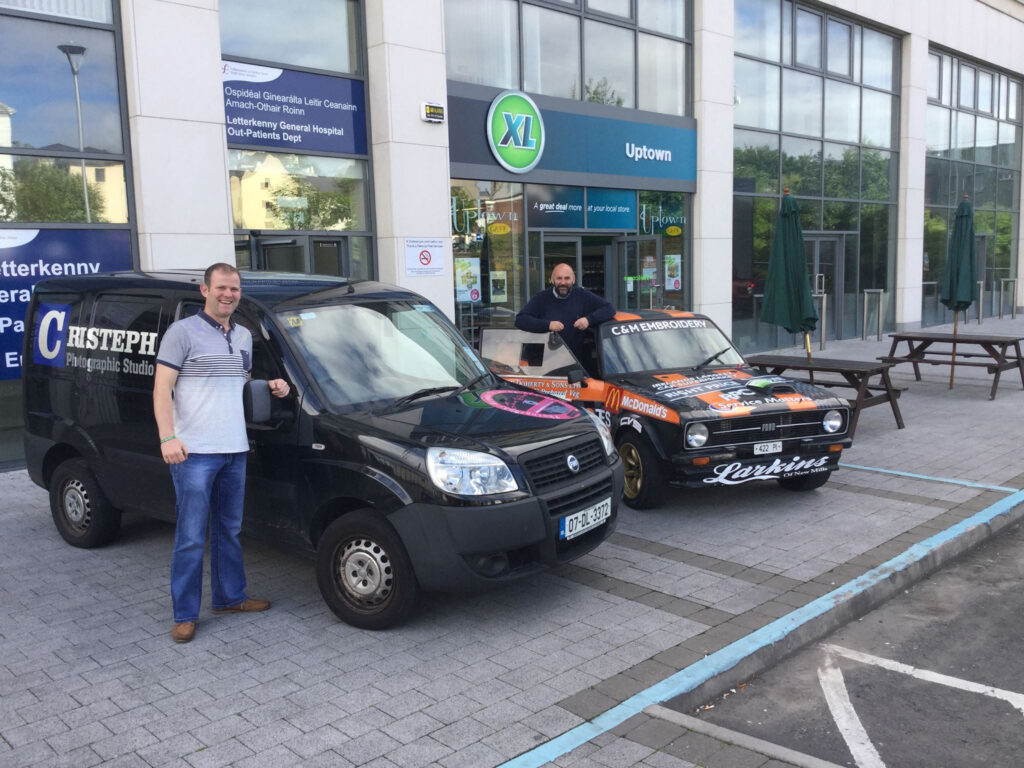 The late Manus Kelly and his car 422 PI pictured with my old van and myself after his win in 2015 at Up Town Cafe.

I know that we now take far more photos than we ever took, and in theory it seems a better way to store them digitally compared to and old shoebox full of packets of photos, but people change phones and forget how many memories in photographic form they have and in changing over they are loaded up to the clouds or a hard drive or even deleted to make space. Then the photos that we do share online these days with small things like number-plates covered stop a photo in its tracks, How many times was the conversation started by someone spotted an old car and it number plate, These are only the numberplates of five cars from different parts of the same life time all making time markers in a very unique way