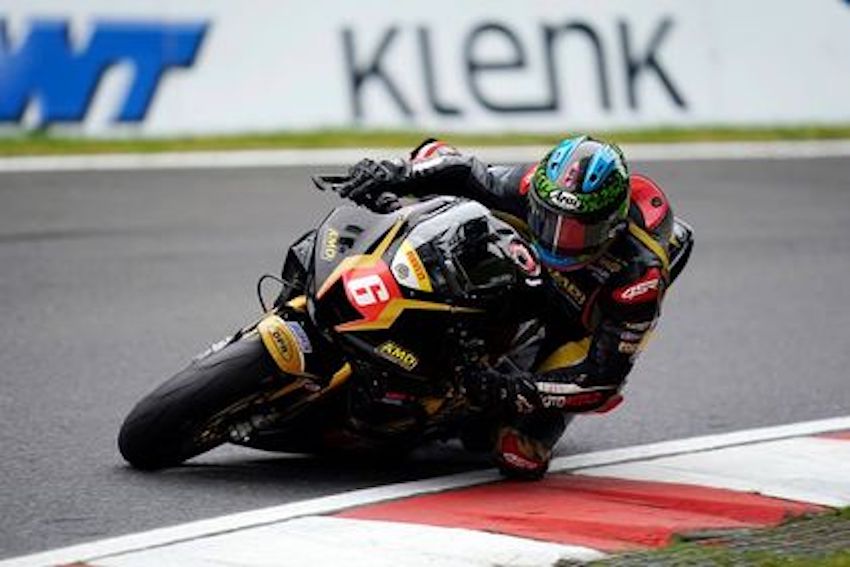 ROUND six of the Pirelli National Superstock Championship took Richard Kerr and the Dumfries-based AMD Motorsport team to Cadwell Park in Lincolnshire.

It proved to be the team’s best meeting to date as the Kilmacrennan rider finished in a brilliant seventh place.

However, Richard improved his time on the factory-prepared Honda Fireblade by a tenth of a second and that placed him 19th overall for Sunday’s 15-lap race.

Starting from the seventh row, a now regular good start enabled him to gain three places on the opening lap and this had become 13th two laps later, courtesy of Luke Mossey and Ian Hutchinson crashing out and his own overtaking manoeuvre on Matt Truelove. The red flag came out shortly afterwards though due to rain.

With a better starting position for the re-started race, held over the shorter distance of ten laps, Richard took full advantage to move up to 11th on the first lap and he was soon lapping quicker than he had done all weekend.

Indeed, the fourth lap saw him move up to tenth and such was his pace, he was running just 2.5s behind the race leader Chrissy Rouse. Another overtaking manoeuvre on lap six enabled him to move up to ninth and two laps later this had become seventh which was where he finished for a brilliant result.

Kerr said: “I’m happy with that! I was happy enough with how practice and qualifying went especially with it being my first time here on a big bike so to end the weekend in the way that we did is brilliant.

“I would have liked to have been in the top 15 in qualifying as it’s a difficult circuit to pass on but the damp start to the session meant we had a softer spring fitted and there wasn’t time to change it. The overall set up was good though and I just needed to improve in sector one as that’s where I was losing the most time.

“I made a great start in the race and with the red flag my new starting position was better still so I took full advantage of it. I got boxed in a bit at the start but took the outside line to make up a few places and made up place after place going into Park as I was so strong on the brakes. I felt in a really good rhythm and am over the moon with the result so a big thanks to everyone in the team.”

Fraser Dykes, the Team Owner said: “To say I’m delighted with the weekend would be like asking does Heineken make lager! As far as I am concerned, today’s brilliant performance was down to one man, Richard Kerr. The team can only provide the best bike we can and then it’s down to the rider so this is a massive step forward. I’ve tears in my eyes as it feels like a win and we can’t wait for the next round to keep the ball rolling. There’s no pressure though as ‘that’s for the tyres’ according to Richard.”

The next round takes place at Snetterton, Norfolk on September 3-5.