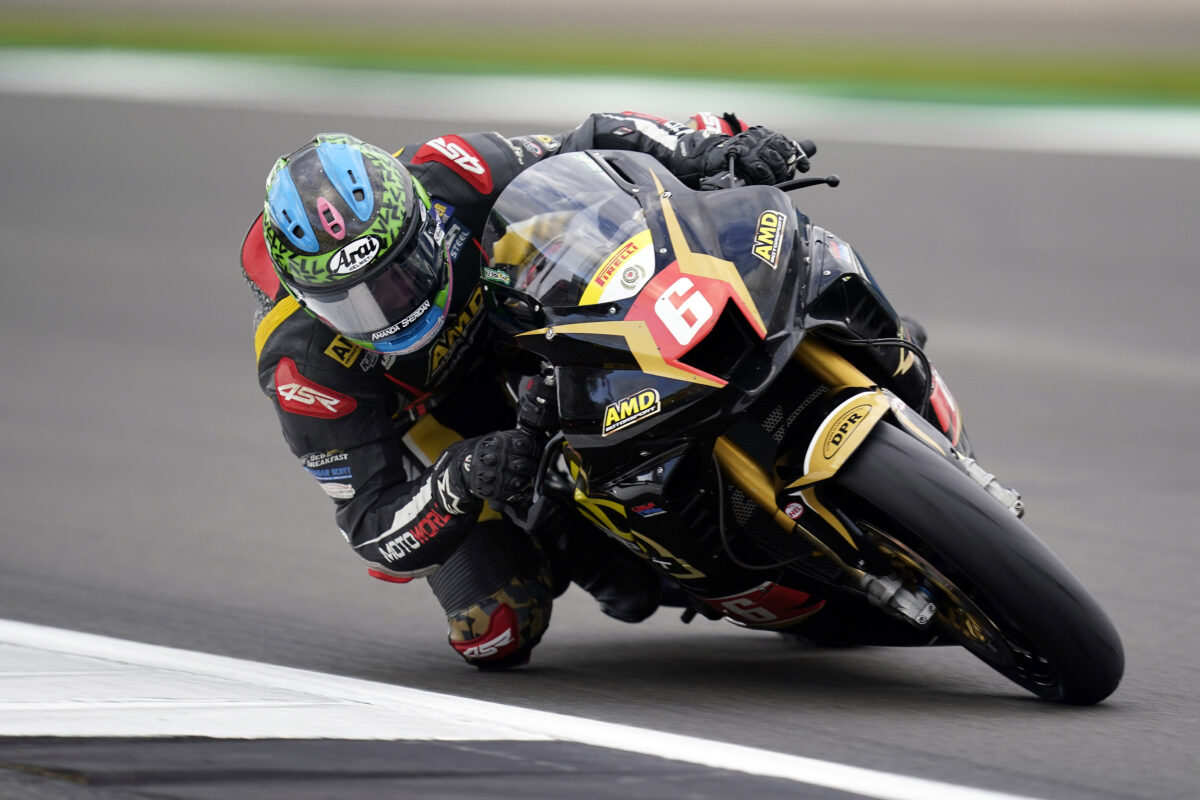 More Superstock points at Silverstone for Kerr and AMD Motorsport

Richard Kerr and the Dumfries-based AMD Motorsport team bounced back from a first race crash at Silverstone on Saturday to score more points in the Pirelli National Superstock Championship. A solid 14th place was secured on the factory-prepared Honda Fireblade in Sunday’s encounter.

The weekend had started solidly for Richard with the 16th fastest time in Friday’s free practice sessions but he improved his time by almost half a second on Saturday morning to qualify in an excellent, and season’s best, seventh place. This placed the Kilmacrennan rider just 0.348s adrift of the pole position time and at the head of the third row for the afternoon’s 22-lap race.

A solid start saw the 21-year old complete the opening lap in eighth place but a lap later he moved back ahead of reigning champion Chrissy Rouse to reclaim seventh spot and he was looking extremely comfortable in the leading pack. However, his race came to an early end on lap three when he crashed out at Becketts after contact from behind from another rider.

Despite only having managed one flying lap in the race, he was still able to start the second race from 13th on the grid and after a good Sunday morning warm-up session, when he placed ninth quickest, hopes and confidence remained high.

Indeed, a good start saw him complete the opening lap in 11th place and a lap later this had become ninth as he looked to bridge the gap to the leading eight riders. He wasn’t the only rider to have that idea though and Tom Ward pushed him back to tenth on the third lap. Part of a large group of riders battling for ninth, Richard got shuffled back to 14th at two-thirds race distance and it was here where he finished for two more, hard-earned points.

Richard Kerr: “The weekend obviously started really well in both practice and qualifying and I was delighted with my time in the latter putting me seventh on the grid. Getting a good grid position is half the battle and I felt comfortable running in seventh until I went down without any warning. I didn’t feel like I did anything wrong and when we got back to the paddock, there were tyre marks on the rear of the bike so it seems clear another rider tagged me from behind.”

“It was a real shame but, thankfully, we got two races over the weekend so we had another go on Sunday and I was happy enough to get back in the points. All the other riders had a full race under their belt and had their bikes that little bit better dialled in so it wasn’t easy whilst the brakes were also a bit inconsistent during the race which made it a bit tricky. I was having to ride a bit defensive but I stayed out of trouble and was in the points again so a big thanks as always to Fraser, Mary and the whole AMD Motorsport team.”

Fraser Dykes, Team Owner: “After such a good qualifying performance and position, we were a wee bit disappointed with the tip-off in the first race, especially as Richard was riding so well in the early stages, but it was good to bounce back with a points-scoring finish. We’re happy enough to pick up some more points although we know it could have been better but it’s all part of the learning curve and we’re looking forward now to the final three rounds, circuits we’ve visited already this season.”

The next round takes place at Oulton Park, Cheshire on September 24-26.